“I recommend that you chill.” 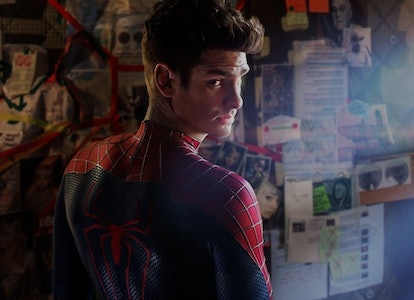 "I'm not the werewolf." This is the way in which Andrew Garfield has opted to deny his involvement in Spider-Man: No Way Home, the upcoming Marvel Studios movie that allegedly acts as a live-action Spider-Verse crossover.

Garfield, who starred as Peter Parker in the two Amazing Spider-Man movies, is one of many actors from Sony's earlier Spider-Man efforts alleged to appear in the Marvel Cinematic Universe's next Spidey film. The actor has stayed quiet on the matter — until now.

While still not confirming his comeback to the Spider-Man franchise, Garfield's first words on the subject are an attempt at a denial — and an attempt that does not hold up to the tiniest bit of scrutiny. This man is absolutely in the next Spider-Man movie, folks, and here’s how we know it.

Is Andrew Garfield in Spider-Man: No Way Home?

Garfield appeared on Josh Horowitz's Happy Sad Confused podcast and fielded the rumors about his return to Spider-Man. An exasperated Garfield finally broke his silence about it all, in a way that seemingly shoots down his turn in the film, but actually does the opposite.

"I do have a Twitter account," said Garfield. "I see how often Spider-Man is trending. People are freaking out about a thing and I'm just like, 'Guys, guys, guys.' I wish I could speak to everyone and say, 'I recommend that you chill.' I can't speak for anything else but for myself. They might be doing something but I ain't got a call."

Garfield didn't stop there. He went on to compare his current situation to the games Werewolf and Mafia, social games where some players are basically double-agents against the greater group.

“I'm not the werewolf. I promise you.”

The exchange continues, with Horowitz pushing in one last time. The final exchange below, slightly edited for clarity:

Horowitz: “So for the record, on a stack of whatever you have you there, you are not — as of this taping — in or have any knowledge of being in the next Spider-Man movie?”

Horowitz: “I just want to get really clear. This is the unequivocal yes/no answer.”

The Inverse Analysis — Okay, so Garfield is absolutely in the next Spider-Man movie.

You don't need anything more than a decent judge of character to grade Garfield's exasperation and know that he has recently filmed scenes reprising his role as Peter Parker. If he hadn't, he would just state it outright. The non-denials are cute and charming, great reminders of Sony's squandered potential surrounding Garfield's Spider-Man, but they are exactly that: non-denials.

What's more, anyone familiar with Werewolf and Mafia has been here before. Garfield is so in the mafia. This dude? Full-on werewolf.

It’s easy to see the future where Garfield is revealed to be in the next Spider-Man movie, and in press for the film, he justifies his earlier denials by saying, "It was like I was playing Werewolf, and when you play Werewolf, you have to lie about being a werewolf!" Indeed you do, Mr. Garfield, so no harm no foul — it’s just that, much like Peter Parker himself, you're not much of a liar.

Place this recent interview alongside all of the various reports surrounding No Way Home, from fellow Amazing Spider-Man alum Jamie Foxx’s return to all the casting bits beyond, and the two-part truth is clear as day: