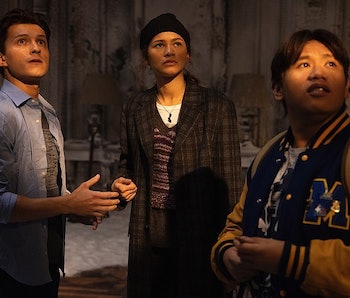 The cast of Marvel's next Spider-Man movie sure had a lot of fun trolling fans yesterday. On social media late Tuesday, actors Tom Holland, Zendaya, and Jacob Batalon (with director Jon Watts in their comments) posted fake titles for the third Spider-Man movie slated for release in theaters this December.

Since then, we've learned an official name for the movie: Spider-Man: No Way Home. An ominous title indeed, with a lot of possibilities worth chewing on.

But even with No Way Home on the board, the gears are still turning based on those joke titles. Was there something real behind the ruse? Did Holland, Zendaya, and Batalon actually reveal more about the plot than we realize? One theory makes a compelling case that, yes, there's more here than meets the "Eye of Agamotto," as it were. Here's what you need to know.

But first: HOW DID TV AND MOVIES GET YOU THROUGH THE PANDEMIC? We want to hear from you! Take this quick Inverse survey.

What Happened? — On Tuesday, Holland, Batalon, and Zendaya shared three fake titles for the next Spider-Man movie on their Instagram pages: Spider-Man: Phone Home (via Holland), Spider-Man: Homewrecker (via Batalon), and Spider-Man: Homeslice (via Zendaya).

These titles are, thankfully, not real. The real subtitle: No Way Home. But there is a solid theory about the fakes (and one that fits comfortably alongside the official title) that hints at something really, really big that will shape the future of the Marvel Cinematic Universe.

The Theory — By now, you may have heard that the next Spider-Man movie will be a big deal. Bigger than usual for a Marvel movie. The movie is rumored, though still not confirmed by Marvel Studios, to explore the multiverse. For Spider-Man, that means Tom Holland's web-slinger may team up with Tobey Maguire (who played Spider-Man in the 2002-2007 film trilogy) and maybe even Andrew Garfield, who starred in the two Amazing Spider-Man movies from 2012 to 2014.

Also confirmed to play a role in the movie is Benedict Cumberbatch, who will return as the sorcerer Doctor Strange in a role that sets up his own 2022 movie, Doctor Strange in the Multiverse of Madness. That movie, by the way, is directed by Sam Raimi, who directed the Maguire trilogy.

Now, there are many ways to look at what the three titles mean, but on Reddit, u/channydin proposed on r/FanTheories the titles means the movie will have three different universes: the Tobey Maguire universe, the Andrew Garfield reboot, and the MCU.

"All three characters are in different multiverses and are releasing their version of the Spider-Man title," says u/channydin. "This also hints at three possible Spider-Men existing in one plain [sic]. And also why Dr. Strange is needed to fix things so that all of them are on the same page (same movie title)."

The titles themselves possibly hint at something in the universes, or that the characters end up in one of the different universes, though even I'll admit this is a bit too "tinfoil hat." Zendaya's title, Spider-Man: Homeslice, possibly references Tobey Maguire's great "Pizza time!" line from 2004's Spider-Man 2, which has become a meme in the online Marvel fandom.

Meanwhile, Batalon's Home-Wrecker title may refer to the tragedy of Emma Stone's Gwen Stacy, who (spoilers?) dies at the end of The Amazing Spider-Man 2.

As for Holland's Phone Home, well, it's just a reference to E.T. I admit, I got nothing for that one, except maybe the amount of times Holland's Peter calls someone like Tony Stark for help — or perhaps tipping off Parker's return trip to space for the first time since Infinity War. (Let's not forget about the Skrulls at the end of Far From Home.)

The Inverse Analysis — u/channydin has a solid theory. Three titles, three universes. Even as a lark, the title campaign reveals a lot about the next Spider-Man.

When Marvel Studios' Kevin Feige announced in 2019 that the 2022 Doctor Strange sequel (then slated for 2021) was going to explore the multiverse, fans couldn't have predicted the Spider-Man franchise would be exploring it, too. So far, Marvel has kept quiet about the movie's plot and premise. Even Holland, now promoting his latest movie Cherry for Apple TV+, feigned ignorance as he deflected the rumors on a Tuesday appearance on Tonight Show.

Meanwhile, Maguire was seen at an unknown costume fitting back in December 2020, while Garfield has thus far not been spotted anywhere near the film's set in Atlanta. However, actors Alfred Molina and Jamie Foxx, who both played the villains Doc Ock and Electro respectively in the past iterations of the franchise, are reported to appear in the movie.

The "multiverse," a real concept from theoretical physics and a popular trope for comic books and sci-fi, was introduced to Marvel moviegoers in a big way in the Oscar-winning 2018 movie Spider-Man: Into the Spider-Verse. And now, via No Way Home, the stage is set for the multiverse to explode in the MCU.

Spider-Man 3, whatever its title will be, will be released in theaters on December 17, 2021.