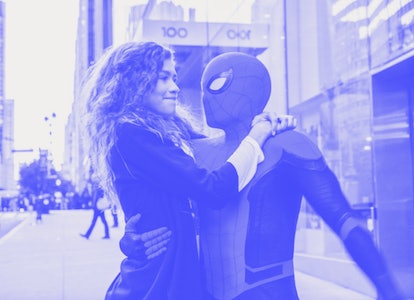 Spider-Man 3 is set to blow Marvel's multiverse wide open. At least, that's according to a deluge of leaks that claim everyone from Jaime Foxx to Kirsten Dunst could reprise pre-Marvel Cinematic Universe roles — not to mention previous Peter Parkers played by Tobey Maguire and Andrew Garfield.

But are any of these rumors actually true? Until recently, the answer has been... maybe???, but a recent interview with MCU star Zendaya Coleman may confirm one huge crossover, giving our Spider-Man 3 multiverse theories a huge boost.

In an "Actors on Actors" interview between Zendaya and Carey Mulligan for Variety focused on their respective new movies Malcolm & Marie and Promising Young Woman, Zendaya seemed to briefly address the rumors that Alfred Molina could reprise his role as Otto Octavius (aka, Doctor Octopus) from 2004's Spider-Man 2 in this upcoming MCU movie.

When Molina came up, Zendaya simply said of him, "Who's so nice by the way." The actress quickly moved on, but that was enough to set off alarms across the internet.

Of course, it's possible Zendaya was talking about Molina more abstractly, but a quick scan of IMDb reveals the two haven't worked together on any other projects, and it seems unlikely they run in the same social circles. Spider-Man 3 just makes the most sense here.

If Alfred Molina is actually in Spider-Man 3 and he's playing a character from his 2004 movie, that essentially confirms what we've assumed for months. The upcoming movie will be the first to bring the concept of a multiverse into MCU canon. Doctor Strange in the Multiverse of Madness will clearly explore similar themes in March 2022, but Spidey's new movie is set to release before the Stephen Strange sequel. (This only seems fair after Spider-Man: Far From Home teased a multiverse before revealing it was just Mysterio's smoke and mirrors.)

Then there's WandaVision, Marvel's first show on Disney+ that seems primed to introduce the multiverse as well. The studio is clearly plotting a major multiverse arc that will seemingly carry over from WandaVision into Spider-Man 3 and then Doctor Strange 2 — showrunner Jac Schaeffer confirmed as much in a recent interview too.

The question is: how many of those other Spider-Man 3 casting rumors are also true? Will we really get three Spider-Men in one movie? What other villains could show up? What about Kingpin from Netflix's Daredevil or even Daredevil himself, Matt Murdock. When it comes to the Marvel multiverse, anything is possible.