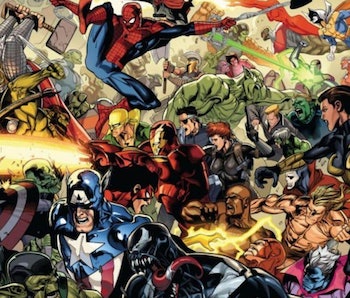 Phil Coulson may be coming back to the Marvel Cinematic Universe. The fan-favorite character played a pivotal role in the earliest Marvel movies, and his death in 2012’s The Avengers helped bring Earth’s Mightiest Heroes together. While he was one of the lead characters on Marvel’s Agents of S.H.I.E.L.D., the MCU films essentially ignored most of the events in the show's seven-season run.

The character's only film appearance after The Avengers was a small role in 2019’s Captain Marvel. However, a new report claims that Coulson may still have an important role to play in the MCU moving forward. Let's break it down. Warning! Possible MCU spoilers ahead.

The News — Daniel Richtman claims that Clark Gregg’s Phil Coulson will return in an upcoming MCU project. Richtman has a mixed track record (at best), so take this one with a grain of salt until Gregg actually shows up in a new post-credits teaser.

Richtman’s report does not specify a particular movie or TV show, there are a few that Coulson could easily fit into. However, one project, in particular, seems like the perfect vehicle for Coulson’s return.

What it Means — Given how closely linked Coulson has been to Samuel L. Jackson’s Nick Fury throughout the MCU, it seems very likely that Coulson will show up in some capacity in Secret Invasion. The Marvel Disney+ series was just recently announced during a Disney Investor Day presentation last December, but it already promises to be one of the most exciting MCU titles of the next few years.

Based loosely on the comic book arc of the same name, Secret Invasion refers to a literal invasion of Earth by the Skrulls — a race of alien shape-shifters. The series will center around the conflict between the humans and the Skrulls when it is discovered that members of the alien race have been impersonating some of Earth’s most powerful heroes and villains, with plans to take over the entire planet.

The series will feature both Jackson’s Nick Fury and Ben Mendelsohn’s Skrull leader, Talos, in lead roles. The latter character was introduced in 2019’s Captain Marvel and grew to be an unexpected ally of both Brie Larson’s Carol Danvers and Jackson’s Fury over the course of the film. In fact, the last time Marvel fans saw both Fury and Talos was at the end of 2019’s Spider-Man: Far From Home, when it was revealed that Talos was impersonating Fury on Earth so that Fury could get a much-needed vacation in outer space.

The Inverse Analysis — Since Phase 4 of the MCU will tackle the multiverse and alternate realities, Coulson could show up in a number of projects. But Secret Invasion seems like the best bet.

For starters, Coulson is one of Nick Fury’s most trusted MCU allies, and he’ll need as many of those as he can get if he’s going to stand a chance at combatting a Skrull invasion. Thanks to his brief appearance in Captain Marvel, Coulson is one of the few human characters in the MCU who already has a history with the Skrulls. In other words, we’ll be really surprised if Phil Coulson doesn’t return in some capacity in Secret Invasion.

Secret Invasion on Disney+ does not yet have a release date.