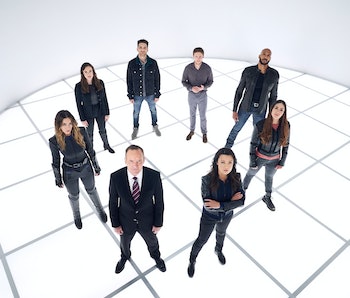 Agents of S.H.I.E.L.D. didn’t end with the team getting dusted by Thanos, but the series finale did make good use of time travel and tied up loose story threads for the characters. Despite not making any sweeping connections to the Marvel Cinematic Universe, Daisy Johnson’s final scene may have quietly set the stage for MCU’s Phase Four and Avengers 5.

Major spoilers ahead for the Agents of S.H.I.E.L.D. series finale.

After defeating the Chronicoms — with empathy for the ones on Earth and Daisy sending out an explosive quake in space — the agents of S.H.I.E.L.D. went their separate ways. Melinda May went on to teach at the renamed Coulson Academy, Mack and Yo-Yo went on new S.H.I.E.L.D. missions, and Fitz and Simmons retired to raise their daughter in peace. Daisy, Sousa, and Kora were on a mission in deep space and fast approaching a nebula. That's where the series ends.

It’s very possible that Daisy and co. are the first agents of S.W.O.R.D. (aka, the Sentient World Observation and Response Department). The space agency is technically another branch of S.H.I.E.L.D., which was set up to protect Earth from any extraterrestrial threats. Daisy, Coulson, and the gang have already dealt with their fair share of aliens. They’ve battled Chronicoms, the Kree, and interacted with a few alien species in Season 6 while looking for Fitz in space.

There have already been inklings of S.W.O.R.D.’s presence in Marvel's movies. The mid-credits scene from Spider-Man: Far From Home indicated that Nick Fury was off-world overseeing the building of the agency’s headquarters in space. That revelation came with the knowledge that Fury was being impersonated by a Skrull (on his authority). Meanwhile, set photos from the Disney+ series WandaVision also revealed that S.W.O.R.D would be involved, somehow. It’s looking more likely that the alien task force will play a big role in the MCU as it heads into Phase Four.

Perhaps Daisy will shepherd in a new era for the MCU and lead S.W.O.R.D. in not only defending Earth from alien threats but also in intergalactic outreach. After all, Daisy mentioned that Sousa kept calling them “Astro Ambassadors.” It’s possible they will be making first contact with aliens and exploring “strange new worlds” a la Star Trek. There's also a chance that Daisy could serve in place of Abigail Brand, who is in charge of S.W.O.R.D. in the comics.

We’ve speculated that Avengers 5 will potentially deal with an otherworldly threat — the Black Order, Secret Wars, Secret Invasion, and other comics storylines involving space might be incorporated. If that winds up being the case, it would be pretty fantastic if Daisy dropped in to help the team as an alien expert. She’s also an incredibly powerful Inhuman, so her transition to the larger MCU would be warranted.

What’s more, Agents of S.H.I.E.L.D.’s executive producer Jeff Bell mentioned that the creative team had “tried S.W.O.R.D. early and we were shut down.” Meanwhile, series showrunner Jed Whedon would say “yes” to doing a S.W.O.R.D. spinoff. Knowing that S.W.O.R.D. was on their minds, it’s possible that sending Daisy to space to become an alien ambassador to Earth is the closest the Marvel series could get to finally including the agency. What that will mean for the MCU’s future is unclear, but it’s definitely a plot worth exploring.

Agents of S.H.I.E.L.D. is currently streaming on Netflix and Hulu.