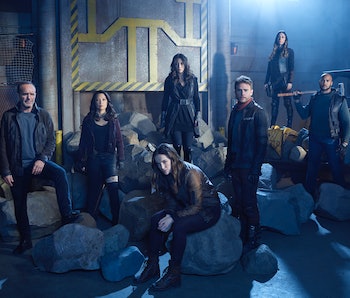 Agents of S.H.I.E.L.D. Season 6 ended on a massive cliffhanger, which saw the return of Agent Phil Coulson as a Life Model Decoy (LMD) copy of the character. With the SHIELD team sent back to early 1930s New York to stop a nefarious A.I. species looking to take over Earth, the heroes of Marvel's longest-running series might make more than one leap across time to stop their own Thanos-level threat.

Here are three standout reasons Agents of SHIELD Season 7 is necessary viewing for any MCU fan:

Contrary to popular belief, Avengers: Endgame didn’t introduce time travel to the Marvel Cinematic Universe. Agents of SHIELD sent its characters to the future in Season 5 by way of an ancient Kree stone. That, on its own, is just one reason to watch the show.

Looking ahead, Kree intervention may explain how Loki will be time traveling and dimension-hopping in his upcoming Disney+ series. Now that the SHIELD team has a time machine, there’s no telling how the series will expand upon the multitude of time travel rules.

The end of Agent Carter Season 2 suggested Peggy Carter lived happily ever after with Daniel Sousa, her pre-SHIELD era coworker. It seemed that Sousa might have been Peggy’s mysterious husband in the MCU, but Endgame shut that down by basically confirming that it was Captain America who’d been with her all along. (Or Cap created an alternate timeline? It's confusing.)

Agents of SHIELD Season 7 could give us a definitive answer to that question. Sousa will likely appear in the show's final season, and Peggy will show up too. Though the series will start off in the 1930s, there’s no telling which era they may travel to next. Should the characters make it to the late 1940s or 1950s, it’s possible Marvel fans may finally learn the identity of Peggy’s husband at last.

1. Season 7 will more explicitly connect to the MCU

The debut season of Agents of SHIELD included an appearance from Samuel L. Jackson’s Nick Fury. As the seasons went on, however, the show pulled away from Marvel's movie plots and began doing its own thing, giving rise to dissonance with its source material.

In its final season, the series may rekindle its relationship with the MCU, beginning with the exploration of the organization's history and the return of Fury's black box, which contains highly classified SHIELD information.

Perhaps the team's objective in the 1930s will directly link back to Endgame or the MCU's Phase Four. At the very least, Agents of SHIELD will feature an MCU Easter egg. But the cast and crew are keeping their cards close to the chest for now. Here’s what showrunner Jed Whedon told TVLine:

“There will be one tiny little MCU nod,” Whedon said.