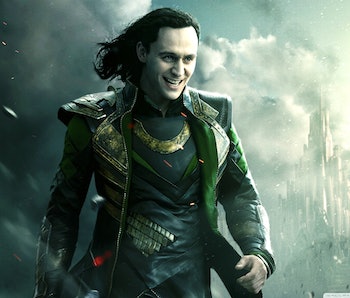 Thor: Love and Thunder won’t be out until 2022, but director Taika Waititi recently dropped quite a few juicy teasers to tide fans over until then. Among them was a tantalizing hint that we haven’t seen the last of trickster god Loki, and the mischevious Asgardian's involvement in Thor 4 may reveal how the character's Disney+ series ends.

On Thursday, Waititi went live on Instagram with Tessa Thompson and Mark Ruffalo, offering some fun commentary about the beloved Thor: Ragnarok. Naturally, the director also revealed some new information about the film's upcoming sequel, Love and Thunder. He also showed off some epic concept art of New Asgard and one character makeover. Amid Waititi’s exciting reveals, he confirmed that the Silver Surfer wouldn’t appear in Love and Thunder, but he neither confirmed nor denied Loki’s involvement in the film.

That may very well mean that Thor’s wily brother will have a role to play in Thor 4 and, more crucially, the news (or lack thereof) seems to spill the beans on how Loki’s self-titled Disney+ series will end. We know that the series will follow The Avengers-era version of the character, who stole the Tesseract and vanished during the Avengers’ time travel mission in Endgame.

At some point in the series, Loki will presumably be captured by the Time Variance Authority (TVA), an organization that monitors any changes to the timeline and multiverse. With Loki poised to break time and potentially mingle with other versions of himself, Waititi’s non-answer regarding Loki’s comeback more than likely means that he managed to survive the events of his series. What’s more, Loki’s appearance in Thor 4 implies he eventually makes it back to the core timeline, possibly having escaped through the fabric of reality to do so. It’s also possible that Thor 4 takes place on another earth or in some alternate timeline.

Previously, a fan theory suggested that Loki’s series is setting him up to be the next major villain in the MCU’s Phase Four. It’s possible there’s some truth to that idea. After all, the trickster god is not only getting his own series, but the events of Loki are presumably connected to the plot of Doctor Strange in the Multiverse of Madness. Why would Marvel jump through so many hoops to keep bringing back a dead character if he didn't have a very important role to play?

With all that in mind, it’s also possible that Loki will appear in a flashback, allowing Thor and fans to see the beloved character without directly influencing into the film’s main plot. With the trickster god traversing through the multiverse and the Tesseract at his disposal, there’s really no telling how his actions will impact the events of Thor 4 and the rest of the MCU after Loki ends. Either way, it would be fun to see him and Thor back together again.