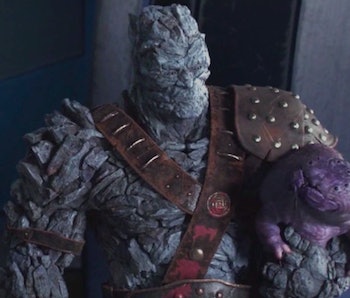 The next chapter of the mighty Thor in the Marvel Cinematic Universe will be revealed in Thor: Love and Thunder in 2022. But director Taika Waititi spilled some beans about what's next for Miek, the sluggish alien sidekick of Korg who was introduced in 2017's Thor: Ragnarok.

Based on what Waititi revealed, Miek is about to get a serious makeover. Behold, friends: Hot Miek.

"I'll be talking about this movie while it plays in the background," wrote Waititi on a Wednesday Instagram post announcing the stream. "Also I tricked at least one special guest to join (they aren't in the movie). It's going to be EPIC!!!(ally boring)."

It was anything but boring. During the livestream, Waititi flashed some concept art for Thor: Love and Thunder and offered some insight into the characters and status quo of Asgard.

After Thor's home planet was destroyed at the end of Thor: Ragnarok, fans saw the once-proud Asgardians struggling to get by in Avengers: Endgame. The alien refugees built a new home in Norway in a small harbor town called "New Asgard." But as the Thor: Love and Thunder concept art teases, the town is now enjoying a boom period of economic and social growth. The grass is greener, the snow is whiter, and the architecture is a lot sturdier and stronger than the floppy shacks we last saw Asgardians live inhabit.

And Miek looks... different. Previously a speechless alien slug with knives for hands (and male pronouns, based on some lines of dialogue in Ragnarok), Miek now apparently identifies as a woman, based on her Joan Halloway-esque outfits. It seems that New Asgard's thriving economy means there's business needing to get done, and Valkyrie — now the ruler of Asgard — needed Miek to help her out.

At the same time, it looks like Miek will also pick a heck of a fight in Thor: Love and Thunder, based on a sleek mech suit she might wear in the movie. It's a suit reminiscent of the robots in Portal 2, as Miek looks like she could have taken on Thanos' army.

There's still so little we know about Thor: Love and Thunder, except that it will also involve the Guardians of the Galaxy and stars Natalie Portman (reprising her role as Jane Foster, the new Thor). The plot of the movie is still a mystery.

Thor: Love and Thunder will also be released in theaters in 2022, and not November 2021 as was previously announced. The coronavirus pandemic has forced Disney to shuffle its release schedule and basically push every Marvel movie back by one date. The Thor sequel was previously scheduled to open in theaters in November 2021; that release date is now occupied by the Doctor Strange sequel, Doctor Strange in the Multiverse of Madness.

Thor: Love and Thunder will be released in theaters on February 8, 2022.