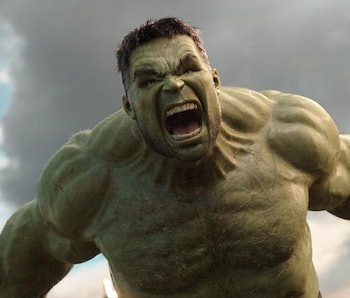 Avengers: Endgame finally saw the brawn of the Hulk merge with the sincerity and kindness of his alter-ego, Bruce Banner. Hulk was still smashing, but it was out of necessity, not anger. New Hulk spent a lot of time convincing his friends and comrades that he was no longer the jaded, enraged person he once was. But, what if his rage wasn’t completely gone? A provocative new theory suggests Hulk’s actions in Endgame’s final act will pave the way for him becoming the big bad of Avengers 5.

Reddit user smileimhigh argues Hulk will become resentful of Tony Stark after risking his life to use the Infinity Gauntlet and undo Thanos's snap. Stark got all the credit when it was actually the Hulk who brought everyone back. Being overlooked would only compound his sorrow at not being able to save Black Widow after her sacrifice on Vormir. The redditor argues Hulk’s anger, guilt, and resentment will lead to a “vengeful violent version of the super strong World Breaker Hulk,” aka World War Hulk.

It’s not the first time the World War Hulk theory has made the rounds. Another fan theory agued that the "cure" Banner used to merge his personalities would backfire and spark a heel turn. Endgame screenwriters Christopher Markus and Stephen McFeely recently confirmed that Banner and Hulk would've met face-to-face inside the Soul Stone, lending credence to the notion that Banner may not have been entirely truthful about his chill new attitude.

In the comics, World War Hulk is a crossover event that started with Hulk being banished from Earth, which resulted in the death of his wife. When he returned, Hulk was primed for revenge against the Illuminati — whose members included Tony Stark and Doctor Strange.

This latest Reddit theory doesn’t draw much from the original comics storyline. However, considering that Black Widow was Hulk's only romantic interest Hulk in the MCU, it would make sense that he would have residual guilt after her death.

While much of this theory depends on Banner's wounded pride, it’s still very possible that Hulk will become unhinged and lose control. The fusion of Banner and Hulk in Endgame felt tenuous at best, like we were all waiting for the other shoe to drop. The idea that Hulk has been reformed once and for all is hard to imagine.

Banner's transformation into New Hulk happened offscreen, so perhaps Marvel’s next two phases will explore what really happened during the eighteen months Banner spent in the gamma lab. Perhaps the events of Endgame will simply be the first step in ultimately turning him into a villain, but only time will tell.