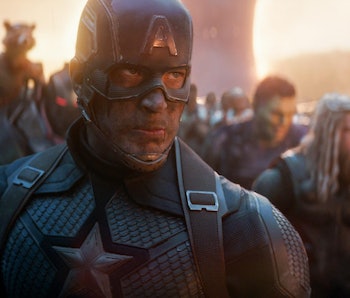 Agents of S.H.I.E.L.D. will take its final bow on August 12. Over seven seasons, the Marvel series has forged its own path, moving away from overt MCU connections following the big Captain America: The Winter Soldier twist in Season 1.

The upcoming series finale will be the final opportunity for the show to link back to the MCU, and a compelling fan theory speculates it could connect to the events o Avengers: Infinity War and Avengers: Endgame in a totally groundbreaking way.

Spoilers ahead for Agents of S.H.I.E.L.D. Season 7.

Agent Phil Coulson and his team have time-traveled throughout Season 7 to stop the synthetic aliens known as Chronicoms from wiping out S.H.I.E.L.D. The Chronicoms see S.H.I.E.L.D. as a threat to their plans to take over Earth, and in the most recent episode, they managed to destroy every S.H.I.E.L.D. in the world.

Reddit user MrCappie surmises the series will end with a major Avengers: Infinity War twist that will lead to Coulson and co. being snapped out of existence by Thanos. Of course, the events of Infinity War and Endgame are so great that it would be remiss for Agents of S.H.I.E.L.D. to gloss over them despite going its separate way. That said, it’s hard to imagine that the show would end its run with all the characters dying in Thanos’ Decimation.

But, there’s an interesting alternative. We know that the agents of S.H.I.E.L.D. have been traipsing through time for a while now, similar to the Avengers’ time heist in Endgame. While they’ve tried to minimize the impact on the timestream, the last episode confirmed that all the changes (Mack and Daisy’s parents dying, Hydra’s Nathaniel Malick allying himself with the Chronicoms) have created an alternate timeline.

It’s possible that the altered timeline is what actually led Thanos to use the Infinity Gauntlet to begin with. After all, the chase after the Chronicoms has sped up the timeline of certain events and plucked characters like John Garrett from the timestream completely, while also giving him and Malick Inhuman powers. These waves could have shifted time itself, compounding to eventually culminate in Thanos’ arrival to Earth. If the theory turns out to be true, it could change everything we’ve come to know about Infinity War and Endgame.

There’s also no evidence that Agents of S.H.I.E.L.D. will be able to return to the original timeline after defeating the Chronicoms. However, they do have a time ship on their hands. If they're able to repair it, repaired, they could theoretically change things back to the way they were. It’s either that or continue existing outside of the timestream. What’s more, before Enoch (who’s seen the future) died, he revealed that S.H.I.E.L.D. team’s trip through time would be their final mission together. It’s possible his statement was foreshadowing Thanos snapping them out of existence.

The Inverse Analysis — Agents of S.H.I.E.L.D. has messed with the timeline a lot in Season 7, though it would be incredibly bold to wrap things up with such a massive cliffhanger. This would be a bleak way to end the show and would likely anger some longtime fans. However, the show has diverged from the movies so much that dropping in such a major connection to Endgame and Infinity War would realign the show’s continuity within the MCU’s framework. It’s also possible that this particular ending will have an immense impact on the future of Marvel’s movies and Disney+ shows.

Either way, we’ll find out how Agents of S.H.I.E.L.D. will end its story soon enough.