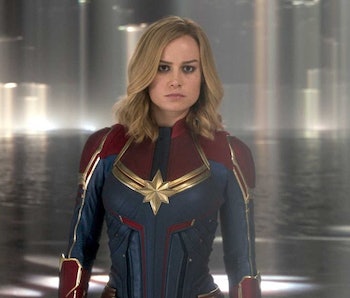 Marvel’s Agents of S.H.I.E.L.D. has been laying the groundwork for the Kree’s intergalactic ambitions for a long time. First introduced in Season 2, the alien species and their technology have played pivotal roles ever since. They were revealed to have created the Inhumans, genetically modified humans with unique powers. In Season 5, an ancient Kree structure, the Monolith, was used for time travel. Now, with the characters journeying back to the 1980s in Season 7, Agents of S.H.I.E.L.D. could be setting up a big Captain Marvel 2 reveal.

The Kree have also played an important role in Marvel’s cinematic universe. Ronan the Accuser, first introduced in Guardians of the Galaxy, was among the most recognizable of the bunch. Later on, Captain Marvel saw the militaristic alien race kidnap and brainwash Carol Danvers.

In an interview with Variety, Clark Gregg revealed Coulson and his team won’t just be sticking to the 1930s. Now that they have a time traveling ship, they’ll show up in different decades, including the 1980s.

Agents of S.H.I.E.L.D. showrunner Jed Whedon also revealed there would be "one tiny little MCU nod." Of course, that could mean anything and nothing, but there's a lot to glean from the fact that S.H.I.E.L.D. agents will visit the 1980s. Gregg also told Variety that the Chronicoms, an advanced A.I. species, were “trying to undo parts of history.”

The most relevant event from 1980s Marvel history was the Kree’s arrival to Earth in 1988, which hinged around Mar-Vell, a Kree scientist masquerading as a human. Starforce commander Yon-Rogg kills Mar-Vell for betraying the Kree and abducts Carol Danvers, giving her a Kree blood transfusion and taking her to their home planet of Hala.

It’s possible that Agents of S.H.I.E.L.D. will drop in on the 1980s to prevent the Chronicoms from changing Captain Marvel’s history. The ultimate goal of this A.I. species still isn't totally clear, but we're likely to find out more in Season 7. Perhaps they want to ensure that the Kree never kill Mar-Vell, or take Carol? Whatever the case may be, Agents of S.H.I.E.L.D. could be setting up a major Kree reveal for Captain Marvel 2. If this mission goes awry, the time travel trip might lay the foundation for the Kree-Skrull war on the big screen.

It seems likely the Captain Marvel sequel setting up the "Secret Invasion" comic storyline, which centers around the Kree. If Season 7 plans to use MCU Easter eggs sparingly, what would be more effective than setting the stage for the next big villains?