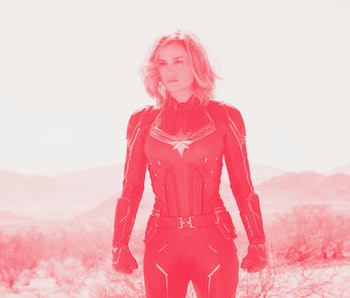 While Captain Marvel didn’t reveal the Supreme Intelligence’s actual appearance, a deleted scene from the film reveals a more comic-accurate version of the character. It's one of many bonus features included in the Infinity Saga collection, which consists of all 23 films from the MCU thus far. In an image from the scene (via Reddit), Captain Marvel stands in front of the enlarged green head, her body aflame. Without seeing her face, Carol Danvers looks ready for a fight. You can check it out below!

The scene is clearly unfinished and the image looks more like concept art, but the fact that the scene was filmed at all means that there were plans in place to include the Kree leader’s true form and an interview with Captain Marvel’s production designer Andy Nicholson confirmed exactly that. Here’s what he told ComicBook.com last year:

“It was there. We did develop a line where within that space from the big pool of water in the back of the room, that eventually, that's where the big green head would come out of. I think eventually for the final scene of the movie, it would've taken away from what was the core focus which was, it would've been a big spectacle which would've overwhelmed the main thrust of what we were doing which was talking about Carol's development and transformation into Captain Marvel.”

It’s possible the Supreme Intelligence will appear at some point in Captain Marvel 2, this time in its fully formed comic-accurate appearance. After all, following the first movie's climactic battle, Carol Danvers tells Yon-Rogg to send a message back to the Supreme Intelligence, declaring that she’s “coming to end it. The war, the lies, all of it.”

While it’s unclear whether Danvers took care of the Supreme Intelligence in the years between Captain Marvel and Avengers: Endgame, it’s a safe bet that she’ll make good on her promise to end the character once and for all in Captain Marvel 2.

The Infinity Saga Collector’s Edition box set is out now.