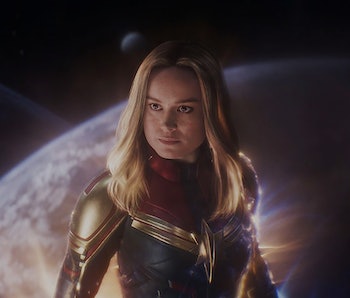 A nasty rumor about Brie Larson and the future of Captain Marvel in the Marvel Cinematic Universe began circulating over the weekend claiming Disney has lost confidence in the actress and Captain Marvel 2 is in jeopardy. But these unconfirmed reports feel like a fabrication by what we might as well call the white nationalist fringe of the entertainment news industry.

On Saturday, September 21, We Got This Covered wrote about a Cosmic Book News article reporting that Disney has “lost confidence” in Brie Larson as Carol Danvers, aka Captain Marvel, and that somehow the Disney-Sony split over Spider-Man has exacerbated the situation. While it’s true that Captain Marvel 2 does not have a firm place in the MCU’s timeline yet, there’s no reason to assume it won’t be included as part of Phase Five, as Kevin Feige stated back at San Diego Comic-Con.

This exciting, controversial piece of entertainment industry news probably makes a lot of Disney/Marvel critics very happy, particularly the ones who review-bombed Captain Marvel with eloquent analysis, like the one person who referred to it as an “SJW laden white male hating worthless POS movie.” (And that was before the movie even came out.)

But before simply turning these rumors into content, we should be investigating where they come from. When we do, it becomes clear that this story was fabricated by someone looking to influence public opinion rather than report on something that’s remotely true.

The Captain Marvel 2 rumor originates from the “Overlord DVD” YouTube channel. Its host claims their inside source said Disney deemed Brie Larson a “little stiff” and “a bit unlikable” in her portrayal of Carol Danvers in Captain Marvel and Avengers: Endgame. (The language here already has a concerning tone of misogyny to it.)

Marvel was allegedly “counting on pairing her up with Spider-Man in order to humanize and balance her out a bit.” Supposedly, the plan was to have her team up with Peter Parker in some capacity. This part actually sort of makes sense after the Far From Home post-credits, but beyond that, this quickly veers into total fantasy. The video claims that Carol Danvers would belittle Spidey to prop herself up. The host even cites this specific plot point as the reason Sony pulled Spidey out of the MCU — Sony didn’t want their biggest asset as the butt end of a joke.

Why should anyone trust this rumor? They shouldn’t, at all.

This “major scoop” from an “inside source” feels like pure BS, and Overlord DVD’s channel is just like the Marvel version of Mike Zeroh. Zeroh regularly posts YouTube videos about fake rumors and leaks related to Star Wars movies just to rack up the views from unsuspecting fans. Somehow, this Overlord guy is even less trustworthy.

The host of Overlord DVD dubs himself Dicktor Van Doomcock (hence the DVD), who is the “future ruler of Earth.” According to his bio, DVD is a “supervillain and pop culture critic.” He wears a Doctor Doom knockoff helmet, speaks like he’s doing a bad Darth Vader impression, and wears a robe that looks like he bought it from a Time Lord 50 years ago. Overlord’s “co-host” is a small plush doll Cthulhu with an even more annoying voice. The entire thing looks like a dumpster fire, and that’s before he even starts talking.

Who actually trusts this guy for entertainment news? He once wondered if Rian Johnson was “ruined” back in August 2018. Just a few days ago, he publicly used “the C word” to describe Johnson in a tweet. He even tried to spread a rumor that Rian Johnson was losing his upcoming Star Wars trilogy based on absolutely nothing.

Overlord “raged” at Lando Calrissian being confirmed as pansexual in Solo, calling it “SJW news.” He once called Black Panther a “thickening pile of bullshit” because it was crafted as a “crusade” and a “political litmus test.” He also claimed that Lucasfilm President Kathleen Kennedy committed a “crime against humanity” by perceiving Star Wars “as a delivery system for her feminist propaganda.”

Say what you will about Brie Larson’s performance in Captain Marvel or the overall quality of the film, but the language used by Overlord is rooted in the hate speech of the same misogynists who called Rey a “Mary Sue.” These are the same people who review-bombed Black Panther, Captain Marvel, and The Last Jedi for presenting non-white male heroes to a mainstream audience.

The vast majority of these videos are harsh reactions to progressive entertainment franchises. His opinions are overwhelmingly anti-Disney and pro-Warner Bros, but they also make it clear that he’s a defensive white male. When news broke that Henry Cavill would no longer be Superman and reports came out that Warner was considering Michael B. Jordan for the role, DVD called it “a fucking disgrace.”

Matt Miller wrote an article for Esquire in December 2018 calling Overlord and his followers out for being the toxic fandom that’s tried to ruin Star Wars, and it led to a surge in online harassment for Miller.

Dicktor Van Doomcock might be the foolish king of an internet hate mob, but he’s also so cowardly he won’t even reveal his face. He’s a racist, sexist bigot, and he wears it on his sleeve. The only thing worse than being this guy is spreading his hateful “rumors” as possible legitimate news.

Overlord is not a journalist, and he clearly does not report the objective truth. He operates with a specific, hateful agenda that a lot of people seem to agree with. He may have over 50,000 subscribers on YouTube, but that doesn’t make him right. It just means he has a large audience, even when he shouldn’t.

Captain Marvel 2, starring Brie Larson as Carol Danvers, will probably be released sometime in 2022 or 2023.