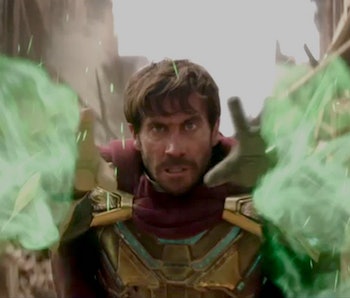 Remember at the end of The Avengers when Marvel first revealed Thanos in a post-credits scene? No one knew what it meant (not even Marvel), but it was clearly something big. Well, I’m pretty sure that’s what the studio is doing once again in the Spider-Man: Far From Home post-credits scene, teasing the primary conflict of the Marvel Cinematic Universe’s Phase 4 in the very last moments of Phase 3.

Warning: Full spoilers for the Spider-Man: Far From Home post-credits scene below.

First, a quick refresh in case you missed the post-credits scene (or just haven’t seen Spider-Man: Far From Home but don’t care about spoilers.) In the final scene — click here for a recap of the mid-credits — we learn that Nick Fury and Mariah Hill have actually been Talos and his wife (the alien Skrulls from Captain Marvel all along. Or at least, for all of this movie. It’s unclear when the switch happened.

But before the repercussions of this reveal can sink in, there’s an even bigger one. We cut to Nick Fury on the beach, presumably enjoying his retirement while an alien handles his job for him. But then, the camera zooms out to reveal he’s actually on a spaceship full of Skrulls. After getting some sort of alert (possibly related to what happened in Spider-Man: Far From Home) he jumps into action.

So what does this all mean? Well, the decision to show Skrulls impersonating top S.H.I.E.L.D. agents seems like a direct reference to “Secret Invasion,” a 2008 Marvel comic book crossover event where it was revealed that Skrulls had secretly infiltrated the highest levels power across the Earth using their unique ability to transform into any other person they see.

Then again, the comic book version of “Secret Invasion” doesn’t exactly match up with the MCU’s, where the Skrull seem to be working in tandem with humans (or at least with Nick Fury). Still, the revelation that Skrulls are impersonating some of the most powerful humans on Earth shouldn’t be taken lightly. Sure, this could just be a teaser for a Captain Marvel sequel that grapples with the alien conflict the first movie introduced (did you catch that “Kree sleeper cell” reference?), but this just feels bigger.

We still don’t know exactly where all of this is headed or what it means for the MCU’s Phase 4. Maybe Marvel doesn’t either. Remember, when Avengers first teased Thanos, it was just because Joss Whedon thought he was a cool bad guy.

We’re pretty sure the Marvel machine is a little more sophisticated than that in 2019, but that doesn’t mean everything has been perfectly planned out. And it doesn’t mean the plot of Avengers 5 isn’t still up in the air. Who knows, maybe if fans go wild for the Skrulls we might just get the epic Avengers: Secret Invasion movie we’ve been waiting for since the Skrulls first showed up in the MCU in March 2019.