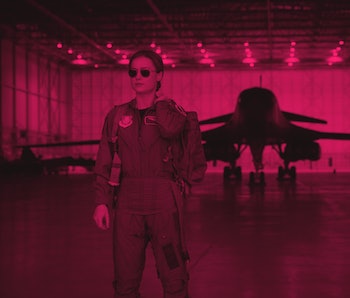 It should be no surprise that Marvel already working on a sequel to 2019's billion-dollar hit Captain Marvel. But what is unexpected is just how much the movie will connect to the rest of the Marvel Cinematic Universe's Phase Four slate, including the Disney+ series WandaVision.

On Wednesday, The Hollywood Reporter reported that Disney is "officially" working on a sequel to Captain Marvel, currently gunning for a 2022 theatrical release. The film doesn't yet have a title, but we'll just call it Captain Marvel 2 for convenience sake.

THR reports that Disney is seeking the talents of writer Megan McDonnell, currently a staff writer on the upcoming Disney+ series WandaVision. "McDonnell is in final negotiations to seal her deal," wrote THR. The publication further reported that Captain Marvel directors Anna Boden and Ryan Fleck will not direct the sequel, but are tapped to oversee a different, unnamed Disney+ series. Marvel is looking to hire a woman director for Captain Marvel 2.

It's McDonnell's existing position as staff writer on WandaVision that makes her potential hiring so interesting. Should McDonnell write Captain Marvel 2, it is likely that the connections to WandaVision will become stronger. At San Diego Comic-Con last July, Marvel Studios boss Kevin Feige revealed that the character Monica Rambeau, who in the comics went by Captain Marvel before Carol Danvers, will appear in WandaVision played by Teyonah Parris. Child actress Akira Akbar played a young Monica in Captain Marvel.

Set leaks of WandaVision show adult Monica is an agent for S.W.O.R.D., a military intelligence force that defends Earth from alien threats. The organization debuted in Joss Whedon's Astonishing X-Men.

So! Here's the landscape: You've got WandaVision, a Disney+ streaming series confirmed to play a big part in the 2021 film Doctor Strange in the Multiverse of Madness, will also feature ties to 2019's Captain Marvel through a specific character. Now you've got Captain Marvel 2, a sequel taking place in the modern-day, hiring one of the writers on WandaVision to pen the script. Obviously we don't know the plot details to the film, nor do we actually know if Captain Marvel 2 will include Parris' Monica Rambeau in the movie.

But what we do know is that Marvel, and by extension Disney, isn't afraid to blur the lines between what's on TV and what's in theaters. The Mandalorian is a major hit that helped launch Disney+ and was itself an ambitious film-level production unlike anything else. There was that little connective tissue -- Baby Yoda's Force-healing -- that helped set up a big reveal in Star Wars: The Rise of Skywalker. It's not unreasonable to expect Marvel to do the same, and maybe even in a more severe manner than Star Wars.

We can also guess that Monica may not take over for Brie Larson as the new Captain Marvel. Not only does it feel like Larson is only just getting started, but Disney+ will also be the platform for Ms. Marvel, a new Marvel show about a Pakistani-Muslim teenager from New Jersey who loves Carol Danvers. Monica has also gone by numerous names in the comics, including the name "Photon," which was included as an Easter egg in Captain Marvel as her mother Maria Rambeau's Air Force callsign.

Captain Marvel 2 is expected to release in 2022.