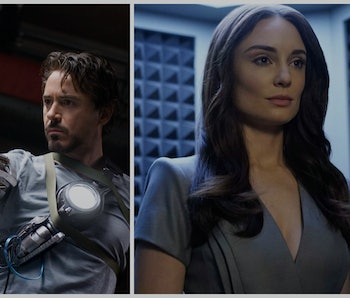 The problem with introducing the invention of LMDs to Agents of S.H.I.E.L.D. is that Tony Stark (Robert Downey Jr.) made an off-handed joke about them in 2012’s The Avengers. Stark couldn’t have known about the LMDs back in 2012 when Holden Radcliffe (John Hannah) hadn’t even developed them yet, right?

The Avengers scene hinting at LMDs goes like this:

Tony Stark: You have reached the life model decoy of Tony Stark, please leave a message.

Coulson: This is urgent.

Stark: Then leave it urgently.

Outside of the MCU, the slip-up was just a case of Joss Whedon and Zak Penn not being able to anticipate that Marvel’s later television show would choose the same obscure Marvel plotline to adapt. Inside the MCU, however, the mix-up can be explained using Patton Oswalt’s trio of characters. In the MCU, Agents Sam, Eric, and Billy Koenig (all played by Patton Oswalt) were working on the LMD project over at S.H.I.E.L.D. before Radcliffe got his robotic assistant Aida working.

Is this explanation a little cheap? Sure. Regardless of the explanation being shoehorned into the MCU, it’s still fun to watch Marvel’s huge (and growing!) group of writers scramble around trying to fit their entire fictional universe under the same dome.