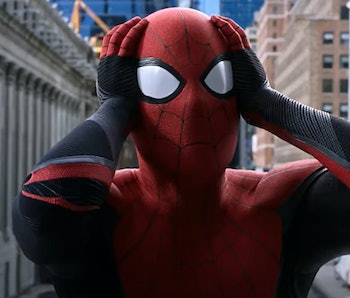 Untitled Spider-Man 3, no more! After literal years of speculation, Tom Holland's next adventure as Peter Parker finally stands revealed with a title in place …

… or does it? Late Tuesday night, Holland and his fellow cast member Jacob Batalon announced conflicting titles for the next Spider-Man movie, sending Marvel fans into a veritable online multiverse of madness. Here's what you need to know.

But First: HOW DID TV AND MOVIES GET YOU THROUGH THE PANDEMIC? We want to hear from you! Take this quick Inverse survey.

What Happened — On Tuesday night, Tom Holland revealed the name for the next Spider-Man movie, and it follows the tradition of Homecoming and Far From Home before it. According to Holland, the movie is called Spider-Man: Phone Home. E.T., call your lawyer.

"So excited to announce the new Spider-Man title," Holland wrote in an Instagram post. "Can’t wait for you lot to see what we have been up to. Love from Atlanta."

The post was accompanied by an image of Holland, Zendaya, and Jacob Balaton reprising their roles as Peter, MJ, and Ned.

Holland also posted a logo for Spider-Man: Phone Home. And with that, the speculation surrounding the next Spider-flick's title officially came to a close.

What Happened Next — Not to be outdone, Jacob Batalon took to his own Instagram account with a different picture of Peter, MJ, and Ned. What's more, Batalon posted a completely different title and logo: Spider-Man: Home-Wrecker. Who knows about the movie, but Batalon certainly lived up to the title, home-wrecking the many folks who rushed online to tell their friends all about the new Phone Booth title.

(Definitely not me, folks.)

So, What's Happening Now? — What gives? How can a single Spider-Man movie have two titles all at once? And what's going to happen when Zendaya inevitably posts Spider-Man: Homerun logo treatments? (Update: close enough.)

Is Batalon stealing Holland's thunder from an actual announcement? A coordinated campaign meant to get everyone laughing, if a little bit head-spun? If nothing else, it's a carpet-rolling exercise, as the powers that be at Marvel are clearly on the verge of confirming a movie that's gone untitled for a very, very long time.

Of course, the Phone Home title makes a lot of sense, if it's the film's actual title. In contrast to the well-kept secret of the third MCU Spider-Man movie's title, the worst-kept secret in town is the film's likely involvement of Alfred Molina, Jamie Foxx, and other Spider-Man movie veterans. (Even Tobey Maguire and Andrew Garfield are likely bets for the next Spider-Man adventure, if not yet confirmed.) Phone Home gives off strong "get me out of this multiverse of madness" vibes, and so there's a deep desire on my part for the title to stay intact. Batalon's needling makes it feel a bit unlikely, but for now, one can dream.

Then there's the other provocative possibility: Skrulls. At the end of Spider-Man: Far From Home, Captain Marvel breakout Talos and partner Soren were revealed as Earth's presiding Nick Fury and Maria Hill respectively. Talos will return in Secret Invasion, but will the Skrulls return even sooner than that in the upcoming Spider-Man movie? The Skrull-green title treatment raises some eyebrows, and the phrase "phone home" is even more evocative of a certain extraterrestrial who should, again, really be lawyering up. (Matt Murdock may be in the vicinity, if more Spider-Man rumors are to be believed.)

The Inverse Analysis — Every single thing about the new Spider-Man feels weirder and weirder, and this web-spinning yarn about the Marvel movie's title from notorious pranksters Holland and Batalon is certainly no different. Phone Home is the likelier name over Home-Wrecker, but the fact that both actors are trotting out different titles makes it all the less likely that either of them are the real title. (As of press time, Macaulay Culkin has not yet chimed in with a logo for Spider-Man: Home Alone. Stay tuned, true believers.)

So, what's the next Spider-Man movie actually called? For now, it's still up in the air — but the hype meters are as high as ever, and an announcement should be coming home any moment now.

The next Spider-Man movie premieres on December 17, 2021.