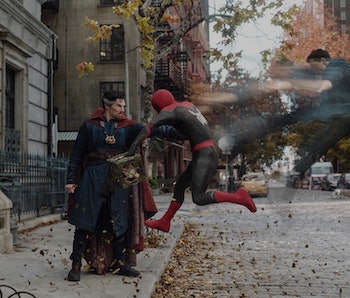 Marvel fans finally got a long-awaited Spider-Man: No Way Home trailer this week, and it easily lived up to the hype.

Notably, the trailer also ends with an appearance from Alfred Molina’s Doc Ock, a reveal that comes moments after the preview teases the return of both Willem Dafoe’s Green Goblin and Jamie Foxx’s Electro. If rumors are to be believed, these aren’t the only villains from Sony’s past Spider-Man films who’ll pop up in No Way Home.

In fact, the film could give one underrated villain from Sam Raimi’s Spider-Man 3 the chance to dazzle us one more time.

Multiversal Villains — The Spider-Man: No Way Home trailer features a few, very obvious villain moments, from Doc Ock’s appearance to the cameo by one of the Green Goblin’s Pumpkin bombs. But the trailer might hint at several other villains as well, including Thomas Haden Church’s Flint Marko a.k.a. Sandman from 2007’s Spider-Man 3.

There are two separate instances in the trailer when huge clouds or masses of sand can be seen exploding or swirling across a landscape. The first (screenshotted below) comes at around the 2:14 mark of the No Way Home trailer, while the second comes a little later (near the 2:27 mark).

The shots in question have, understandably, led many to believe that Haden Church’s Sandman may be appearing in the film. Given the presence of electricity in those sand clouds, he could even be teaming up with Foxx’s Electro.

Sandman’s Return — Rumors have been circulating for well over a year now that Spider-Man: No Way Home will feature certain actors reprising their villainous roles from past Spider-Man films. However, unlike Molina, Dafoe, and Foxx, Thomas Haden Church’s name has been noticeably absent from those rumors and discussions. That would make his possible inclusion in Spider-Man: No Way Home genuinely surprising. But if he is in the film, it’s not hard to imagine that twist paying off.

For all the film’s many problems, Haden Church’s Sandman is one of the few genuine strengths of 2007’s Spider-Man 3. His version of the character had legitimate and relatable motivations, and the decision to make him Ben Parker’s killer ultimately brought an extra, emotional layer to his rivalry with Tobey Maguire’s Peter Parker. Indeed, Spider-Man 3 suffered from having too many villains, but Haden Church’s Sandman was the only one of the film’s three antagonists (the others being Venom and Hobgoblin) who actually felt worthy of menacing Spider-Man.

Unfortunately, given that the rest of Spider-Man 3 is as uneven as it is, Haden Church’s Sandman has never received the recognition or credit he deserves. Fortunately, an appearance in Spider-Man: No Way Home could very well rectify that.

The Inverse Analysis — There’s still quite a bit of mystery surrounding Spider-Man: No Way Home, even after everything its first trailer just confirmed. Tobey Maguire and Andrew Garfield’s long-rumored roles, for instance, remain unconfirmed, as does Charlie Cox’s alleged return as Daredevil.

Now, fans can add Haden Church’s Flint Marko to the long list of characters who may or may not be in Spider-Man: No Way Home.

If he isn’t appearing, it certainly doesn’t seem like the film needs more villains. But if he is debuting in the MCU, Spider-Man: No Way Home could give the underrated villain a chance to shine outside Spider-Man 3’s shadow.

Spider-Man: No Way Home swings into theaters on December 17th, 2021.