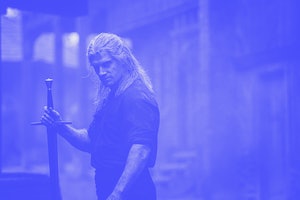 shows for fans of epic storytelling

Shows like 'Game of Thrones': 'The Witcher' and 12 more shows to watch ASAP

Looking for something new to watch? There may never be a show quite like Game of Thrones ever again, but there are plenty of epic stories you can watch on your favorite streaming platforms. From The Witcher and Tribes of Europa on Netflix to anime like Castelvania and romantic time-travel epics like Outlander, here are 13 shows to check out if you don't feel like heading back to Westeros.

For fans of Game of Thrones who liked: Warring tribes and ultra-violence.

Netflix's new original from one of the producers of Dark isn't quite on the level of that cerebral German sci-fi series, but it's still a lot of fun. Tribes of Europe takes place decades after a planet-wide power outage sends humanity back to the dark ages (literally). In a dystopian Germany, multiple tribes fight for power while one teenage boy tries to understand a mysterious high-tech cube that could be the answer to everything.

For fans of Game of Thrones who liked: Epic set pieces and even more epic combat.

Based on a TV treatment written by Bruce Lee, this Cinemax original series follows the conflicts between the rival gangs of San Francisco's China Town in the 1870s. Warrior explores anti-Asian racism in America — which is all too relevant in 2021 — while delivering some of the best action in years.

For fans of Game of Thrones who liked: All the spooky stuff and English accents.

In what is basically a giant-ass crossover of 19th-century gothic fiction, from The Picture of Dorian Gray to Dracula, the Showtime series Penny Dreadful is a psychological horror that gleefully makes use of the most iconic monsters in the public domain.

Today the Palace of Versailles is a tourist attraction your mom would love to see, but its construction had more drama and intrigue than your younger sister's group chat.

A French-Canadian television series for which Netflix holds the exclusive streaming rights, Versailles was a three-season period drama set in swinging 1660s France. The handsome young King Louis XIV (George Bladgen) finds himself plagued by the grievances and insurrections of the aristocracy. To consolidate power, Louis relocates the seat to Versailles and demands the nobles accompany him, allowing him to keep a close watch on their increasingly dangerous intrigues.

Shot on location in the real-life palace, there are plenty of opportunities for hedonism and plotting as all these impeccably dressed schemers are confined in lavish surroundings. If you're feeling cooped up in your living room, Versailles is an excellent way to indulge some couch tourism.

For fans of Game of Thrones who liked: Action, action, action! And color-coded feudalism.

Premiering in 2015 on AMC at the height of Game of Thrones' popularity, Into the Badlands stood out with an infinitely more diverse cast — actor Daniel Wu was regularly noted for being a rare Asian lead in an American television show — and lavish wuxia action choreography.

Set after a devastating war, Into the Badlands sees civilization return to a feudal system with lords, or "Barons," controlling society with their own enterprises and private armies. As Sunny (Wu) questions his place beside his ruthless baron Quinn (Martin Csokas), he takes in a protege with a mysterious power, M.K. (Aramis Knight), whilst keeping the rival The Widow (Emily Beecham) at bay. In Season 2, Nick Frost (Shaun of the Dead) joined the main cast as the drunken monk Bajie, who journeys with Sunny in his quest to return to the Badlands.

Like Game of Thrones, Into the Badlands has a colorful feudal landscape Thrones fans can sink their teeth into. (Each Baron has their own motif, which Game of Thrones didn't really take advantage in doing itself.) The show sadly never reached the same heights as Game of Thrones, but it never sunk to the same lows, either.

For fans of Game of Thrones who liked: Atmospheric occult horror and wintery villains.

AMC's The Terror is a horror anthology that, like American Horror Story, takes place in a different setting each season. While its two current seasons are a must-watch, with Season 2 exploring the often-ignored black spot of Japanese-American internment during World War II, Season 1 scratches a specific Game of Thrones itch.

Set in 1846, The Terror tells a fictionalized account of how two real-life Royal Navy ships, the HMS Terror and HMS Erebus, actually disappeared. When the two ships find themselves frozen in the Arctic Circle, tensions rise as the sailors begin to turn on each other while a mysterious, evil entity preys on them all.

Jared Harris and Game of Thrones alums Ciarán Hinds and Tobias Menzies starred in a near-perfect first season of television horror that would have chilled H.P. Lovecraft to his (racist) bones. With Game of Thrones famously introducing its White Walkers to pop culture, and Thrones author George R.R. Martin making plenty use of Lovecraftian motifs in his story, The Terror is a perfect complement to those seeking more icy horror.

For fans of Game of Thrones who liked: Badass monsters and resurrected heroes.

But those shows owe much to Todd McFarlane's Spawn, the adult-oriented horror superhero series based on the popular Image Comics series. When U.S. Marine Al Simmons is betrayed by his government, Simmons is sent to hell, where he strike a deal with the demon Malebolgia to become a "Hellspawn" and return to Earth. But upon his arrival, Simmons has lost all memory of his human life, except his death.

Airing on HBO in the early 2000s and racking up a few Emmys in its short run, the series was so unlike its era's abundance of superhero "cartoons." Like Game of Thrones, the show challenged ideas of what a "superhero show" is supposed to be like, just as Game of Thrones made audiences rethink "fantasy" as a genre. And like a certain Jon Snow, Al Simmons is a murdered man brought back to life to serve a purpose. Thrones fans will dig it.

Touted as a Game of Thrones rival due to its abundance of Euro-fantasy violence and gruff bearded white guys, Vikings was the History Channel's first significant attempt at a big budget scripted narrative. With its recent sixth and final season ending its journey, Vikings remains a worthy spectacle in its attempt to unseat Game of Thrones.

Favoring more historical fiction than supernatural fantasy as found in Martin's saga, the series "adapts" the legend of Ragnar Lothbrok, who rises from farmer to Scandanavian king and scourge of England and France.

If anything, Vikings is a must-watch purely because of the amount of times the show's fans argue with fans of Game of Thrones on Reddit. (Not to mention Game of Thrones fans who "defect" to Vikings after the HBO show's more egregious creative decisions.) As a catch-all binge option, you can't do better than Vikings.

For fans of Game of Thrones who liked: R-rated violence and an abundance of sex.

What if Game of Thrones was a time-traveling love story rooted in Scottish folklore? You get Outlander, basically pornography in the guise of a lavish cable costume drama. It's based on the book series by Diana Gabaldon and developed for TV by Ronald D. Moore, best known for Battlestar Galactica.

When Claire Randall (Caitriona Balfe), a married World War II nurse from 1946, is lost in time, she awakes in 1743. A stranger in a strange land, Claire falls in love with a strapping young Scottish warrior (Sam Heughan). Their romance is foiled by the evil Frank Randall, who just so happens to be the identical ancestor to her husband in 1946.

A smutty romance whose characters' passions rivals the best romances in Game of Thrones, Outlander is the fix you need to forget Jon and Dany's miserable end.

For fans of Game of Thrones who liked: Fantasy violence based on a major book series.

This one is easy: The Witcher, based on the popular Polish novels by Andrzej Sapkowski and video games from CD Projekt Red, became a hit live-action Netflix show starring Witcher super fan Henry Cavill in late 2019. The saga tells the story of Geralt of Rivia, a gruff "Witcher" who fights deadly monsters in exchange for coin.

You've probably already watched it, or at least heard your friends singing about tossing coins to witchers. Either way, The Witcher is a more than suitable successor to Game of Thrones, what with it also being a major book series (there's eight of them) plus a trilogy of video games that critics call some of the best of all time. Check out the show if you haven't, then run to your local book store for even more hours of fun. And yes, you should shop local.

For fans of Game of Thrones who liked: Depictions of blood magic and roguish heroes.

In 2017, the retro video game series Castlevania became an unexpected streaming hit in a western-made anime for Netflix. Developed for TV by producer Adi Shankar and comic book writer Warren Ellis, the series is the perfect marriage between American and Japanese creators working to make something that is both faithful to the original games, and beyond what our collective imaginations could have dreamed when we played them.

Vampire hunter Trevor Belmont (voiced by Richard Armitage), the last living member of the Belmont clan, teams up with priestess Sypha (Alejandra Reynoso) and Dracula's son, Alucard Tepes (James Callis) in order to defeat Dracula once and for all.

Brutal in all the right ways, and hilarious in just the right doses, Castlevania is what all the cool kids are watching right now.

For fans of Game of Thrones who liked: All the funny stuff, hearty feasts.

When the violence stops being fun, it's time to watch something funny. That's where Norsemen comes in.

Set in 790s Norway, Norsemen is an ensemble comedy with all the production value of a prestige fantasy drama but the day-to-day hijinks of The Office. From rival tribes to disruptive Roman slaves, the village of Norheim can barely keep their ships together as they simply try to get by.

Starring a bilingual cast who shoot every episode in both Norwegian and English, Norsemen is a grounded comedy that is actually quite historically faithful and never breaks its internal logic or setting (so, don't imagine Monty Python or Mel Brooks style humor here). It's just got some solid humor that pokes fun at familiar genre conventions.

For fans of Game of Thrones who liked: A smart show about a power grab among conflicting regions, unknown alien species, and also based on a long book series.

The Expanse isn't your typical spaceships and aliens sci-fi show, just as Game of Thrones isn't your typical swords and sorcery fantasy. Set in the near future after mankind has populated the solar system, the series focuses on the struggle for power among Earth, Mars, and the Asteroid Belt. Even though people have managed to get off the planet, they've still brought all their old biases and vices along with them.

Often celebrated for being Game of Thrones in space, the show is based on the James S. A. Corey novels of the same name. The series is one of those cult shows that fans refuse to let die, and their passion even convinced Amazon to pick it up after Syfy canceled it after three seasons in 2018. With a new season on the way, and maybe even sooner because of the pandemic, now is the perfect time to get off this planet with a show like The Expanse.