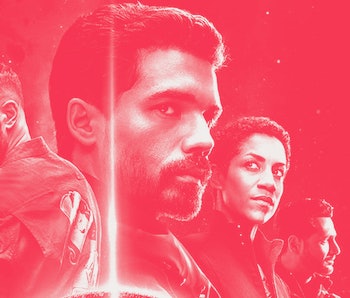 If you haven't already watched the first four seasons of The Expanse, you don't have much of an excuse anymore. With everyday life grinding to a halt all over the world, it's the perfect time to spend a few dozen hours in a gritty, near-future scenario where humans have populated other planets in the solar system, bringing all their problems with them. (Yes, it's as good as you've heard.)

With movie studios like Universal and Disney making new releases available early on digital platforms amid the coronavirus pandemic, we may see some TV seasons drop ahead of schedule. Here's why Expanse Season 5 could be a great fit for that scenario.

The cast and crew of The Expanse wrapped production on Season 5 in the third week of February, according to numerous social media accounts. That means all the actors have filmed their live-action scenes for all 10 episodes.

However, since The Expanse is such a VFX-heavy show and employs several different companies to design its interstellar settings, there's a lot of work still to be done before the episodes are ready for audiences. Whether or not the season could drop early depends upon whether the various visual effects companies involved can complete their work remotely, given the ongoing public health crisis.

So, while it's not particularly likely we'll see The Expanse Season 5 in spring or even summer, it is possible we might get those new episodes a couple months early, if the coronavirus drags on for several more months, or there's big gaps in the entertainment calendar in the months ahead, which seems likely with blockbusters like Fast 9 and Black Widow getting shelved indefinitely.

Season 4 came to Amazon in its entirety in mid-December 2019, and filming for that batch of episodes also wrapped in February. The first episode was screened before a live audience at New York Comic Con in early October. That means that at least some, if not all, of the post-production work on Season 4 was done about two months before Amazon released the series to the public. With live-action filming off the table for now, film and TV distributors might movie to fast-track projects that can be finished up entirely through remote work. The Expanse Season 5 seems like a pretty plausible candidate for this scenario.

The outstanding fourth season of Amazon's The Expanse saw the crew of the Rocinante venture to the newly settled planet of Ilus, thrust in the middle of an ongoing dispute between Belter colonists and enterprising Earthers looking to make a fast buck. By the end of the 10-episode arc, the balance of power in the Sol system had shifted dramatically, with the oppressed Belters suddenly in a position of dominance. This was in large part due to Marco Inaros' stunning direct attack on Earth toward the end of the season.

Expect Season 5 of the series to follow Marco's continued rise to power, while his ex Naomi Nagata reaches out to their son in an effort to stop his reign of terror. The episodes will cover the events of the fifth book in James S.A. Corey's nine-novel series, Nemesis Games.

The Expanse Season 5 does not yet have an official release date.