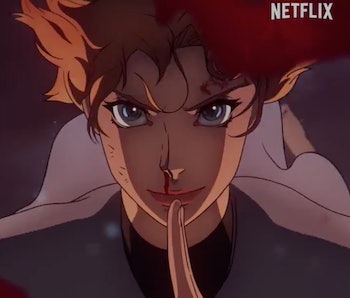 On Friday, after teasing from series writer Warren Ellis on Twitter, Netflix released the trailer for Castlevania Season 3. The season will premiere on the streaming service on March 5.

The acclaimed anime, based on the hit Konami video game franchise, picks up the story of Trevor Belmont, Sypha Belnades, and Alucard Tepes, after the three defeated and killed Dracula at the end of Castlevania Season 2.

All would be well, but Carmilla, the opportunistic vampire mistress of Dracula's war council, is now seeking to amass power in the vacuum of Dracula's absence. She appears to be behind a rash of monsters who are attacking humans under the cover of night. The trailer shows Carmilla creating a spell: "We enclose this corridor and drink all the humans forever." Another disembodied voice says, "The human race is poisonous and corrupt."

We also see Carmilla keeping Hector enslaved. As a Devil Forgemaster who served Dracula, we can deduce that Carmilla is forcing Hector to create the monsters that are killing people.

For unclear reasons, scenes in the new trailer take place in Sengoku Japan. (The Sengoku period took place between 1467 and 1615, which lines up with the Castlevania anime as it takes place in southeast Europe in 1475.)

Again, we're working without context here, but the trailer shows:

Throughout Castlevania's long franchise history, the games have never set in Japan. They've almost always taken place in Transylvania, Romania, some 8,600 kilometeres away. (Although players could pick up stray pieces of samurai armor in games like Castlevania: Aria of Sorrow for the GameBoy Advance and Curse of Darkness for the PlayStation 2.) Why there will be samurai in Season 3 remains to be revealed.

The rest of the trailer shows the return of Trevor, Sypha, and Alucard once again fighting monsters, with trailer text reading: "Evil never stays buried." We can only assume that means Dracula will return in some grotesque form, making Season 3 the most intense season of Castlevania yet.

More like this
Entertainment
8.5.2022 7:00 AM
The Sandman is Netflix’s first great comic book adaptation
By Mónica Marie Zorrilla
Entertainment
8.11.2022 2:00 PM
The Midnight Gospel creator has “no hard feelings” over Netflix cancellation
By Jake Kleinman
Culture
8.9.2022 10:00 AM
The Sandman: 11 characters pulled from DC comics history
By Robin Bea
Related Tags
Share: