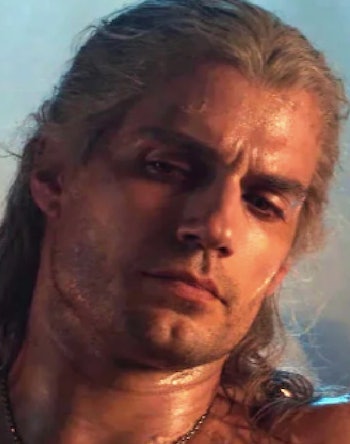 In the vacuum left behind by Game of Thrones and its morally pure hero, Jon Snow, Netflix presents an intriguing alternative.

Based on the popular Polish fantasy book series The Witcher — and not on the even more popular video game adaptation — this new streaming series offers a fresh take on the heroes and anti-heroes who’ve dominated our TV screens throughout the era of “peak TV.”

Showrunner Lauren S. Hissrich, who made the decision to adapt the original books rather than the games, tells Inverse that as much as she might like to imbue her own moral code onto the Witcher’s lead character Geralt of Rivia (played by Henry Cavill), that wouldn’t do justice to the type of hero she’s trying to create.

“I don’t think that Geralt thinks about his personal morality as he’s moving through his adventures,” Hissrich says. “I don’t think he sits in the moment, asking if his actions are wrong.”

Geralt isn’t a traditional hero. He cares more about how well he handles each job as a monster bounty hunter than whether his actions are particularly moral, though that may change as his story becomes wrapped in the grander machinations of the medieval European-inspired Continent where The Witcher takes places.

Will Cavill’s Witcher eventually develop a moral code, or will he remain a mercenary and nothing more? You’ll have to watch to find out.

In a conversation with Inverse, showrunner Lauren S. Hissrich discusses why she chose to adapt the books rather than the Witcher games, some of the more notable changes she made to the franchise, and the future of Netflix’s new fantasy franchise beyond a live-action show.

You’ve mentioned a seven-season map for The Witcher. If you’re able to complete this, will you pass the books, creating new endings for the characters?

I love that the quote about “seven seasons” got picked up so quickly by the press. I swear in another interview, I said, “I could write this series for 20 years.” It’s not that I just don’t understand how numbers work, there is so much material, I believe that we could write forever.

It’s not my intention to go past the books. We’re doing plenty of sort of fun exploration of things that are in the books already. We’re trying to add to the lore. You know, in general, authors end things when they feel like they should be ended. We would honor that as well.

Is there a chance you’ll also adapt stories from the games?

We’re going to stick to the book for a few reasons. One, the games are amazing, but they’re also an adaptation of the books. That would be an adaptation of an adaptation. Two, I don’t think the TV show in any way needs to compete with the games. They can stand on their own. The games have a ton of fans, what we’re doing doesn’t impact the games, at all. The games can keep going with their storytelling and we can keep going with ours and we can live in the same universe really happily.

Did you feel under the shadow of the original live-action Witcher series,The Hexer during production?

I’ve seen a lot of The Hexer. I hadn’t heard of it when I first joined the series. But people very quickly sent me clips of the dragon, in hopes that that CGI has improved a lot in the last 20 years, which it has. The Hexer was obviously a show for Poland, about these Polish books, and to me, we’re expanding the world and bringing it more to, well, the entire world.

I love that we can do things differently now, because of all the advances in technology and huge advances in television. I mean, there’s a savviness of storytelling and savviness of audiences in general. You can do a lot more now with TV than you couldn’t 20 years ago.

Geralt often wavers between shades of altruism. How did you find a balance for his morality?

You know, it’s interesting that I don’t think that Geralt thinks about his personal morality as he’s moving through his adventures. I don’t think he sits in the moment, asking if his actions are wrong. Geralt acts on instinct. He was trained to be a monster hunter. And that’s what he does, and he does it very well. What I think is fun, this season is that we’re taking this thing that he has done for his entire life and suddenly we’re complicating it a bit more.

We’re actually giving it an emotional level for him. His burgeoning morals and ethics are really about how he does his job. He’s a little baffled by it, confused by them because he’s never had these feelings before, and we’re exploring the complication that these feelings bring to his life.

The most important thing was to remember: Geralt isn’t me, Geralt isn’t Lauren S. Hissrich. My morals don’t get to come into play. I’m not a monster hunter and I’m not living on the continent. It’s about Geralt making a decision based on what’s in front of him. And I think you know, anyone who watches the series will see that it’s ultimately really, really grey.

Witcher is being touted as Netflix’s Game of Thrones, their new big franchise. Is there anything else we can expect to see from the world outside of the live-action series?

Right now, I’m solely focused on The Witcher. I’m sure Netflix has plenty of stuff up their sleeves for the future. But this job has been so all-encompassing to my life and to my brain. And for me, right now, the focus is still on getting season one out to an audience and then it’s really buckling down on Season 2.

What was thought process behind more into the Polish side of Witcher, like renaming Dandelion “Jaskier?”

You know, the books are Polish in origin, Andrzej Sapkowski is a Polish author. There’s a lot of Polish folklore and Slavic folklore throughout the books. Now, Sapkowski will be the first person to tell you the books actually feature a lot of folklore from all over Europe and some Anglo-Saxon Russian fairy tales thrown in as well.

It’s really an international book, but the very first place I visited was Poland because I want to know what made Sapkowski write these stories. What was his life like, how that influenced the characters and his world? Witcher isn’t an American franchise, but it’s a franchise that has a lot of worldliness to it. I wanted to make sure that we honored that throughout the entire process.

The Witcher premieres December 20 on Netflix.