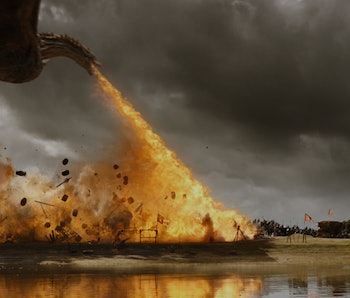 With Daenerys Targaryen taking a major turn into Mad Queen territory, her fate may be sealed, but Drogon’s is up in the air. Drogon is Dany’s last remaining dragon in Game of Thrones Season 8, but is he guilty of war crimes? And with the Night King and Euron both gone, is there anyone else left who can even kill a dragon?

Here’s what will probably happen to Drogon in the Game of Thrones finale.

Jon Snow witnessed the Mother of Dragons’ massacre of King’s Landing, and fans have long speculated that he would fulfill the Azor Ahai prophecy and kill Daenerys. Another theory posits that Jon will conspire with Arya to kill Daenerys (while wearing the face of Grey Worm).

Though many believe Daenerys becoming the Mad Queen (though foreshadowed) was unearned, series creators David Benioff and D.B. Weiss have heavily leaned into this storyline since the premiere of Season 8. Despite everything, Jon will most likely rule Westeros.

Instead of being killed, though, the Breaker of Chains could instead be tried for war crimes against Westeros. Either way, her capture, conviction, and/or murder probably means Drogon will be left behind to face sentencing. Without Daenerys by his side, the last living dragon is very vulnerable, and he could be killed or locked away for good. Jury’s still out on the latter, but killing him seems like the more likely choice.

Redditor u/Seanylato theorizes Arya will be the one to kill Drogon, leaving the killing of Daenerys to Jon. The theory relies on Melisandre’s prophecy — that Arya would shut brown, blue, and green eyes. The prophecy coming true is a bit of a reach, however, and we’re pretty sure Drogon doesn’t have green eyes, anyway. Still, Arya might kill him if everyone agrees he’s just as big a threat as Dany. After all, without Drogon, the Mother of Dragons wouldn’t have been able to burn King’s Landing to the ground.

But how will Arya (or anyone) go about killing Drogon? Euron Greyjoy was able to kill Rhaegal with the Scorpion in Episode 4, but all of the Scorpions were burned by Drogon in Episode 5. If Euron is miraculously still alive, he could exact his revenge by killing the last dragon, but he no longer has a weapon to do it. There’s no doubt they could make new Scorpions, but that might take too long, and there’s only one episode left.

The Night King threw a magic spear to kill Viserion in Season 7, Episode 6, so maybe that’s another option. Still, it would have to be thrown with incredible strength and velocity to pierce Drogon’s thick skin. Arya might be the only one capable of killing Drogon, especially considering all the training she’s had. After all, she landed the final blow to the Night King and could work with Gendry to develop a weapon made specifically to kill dragons.

Even though Daenerys will surely face consequences for her actions, Drogon doesn’t have to die at all. Jon could make a case that he was being controlled by the Mad Queen and ask for his life to be spared.

After all, Jon is still a Targaryen, and it’s looking more likely that he’ll be the new King of Westeros (though he probably won’t have an Iron Throne to sit on). He’s also the only other person besides Daenerys who can ride and tame dragons. Now that Ghost has gone beyond the Wall with Tormund, Jon could keep Drogon around. It would certainly be a fitting end to the Targaryen legacy.

The Game of Thrones finale airs Sunday at 9 p.m. Eastern on HBO.