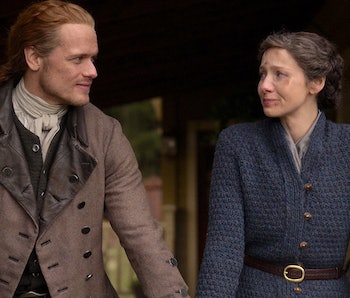 Outlander Season 6 has been delayed. The beloved Starz drama was set to begin filming its sixth season in May, but the Covid-19 pandemic has heavily affected its production schedule. The historical romance is currently scheduled to start filming in early 2021 and we’ll likely have a better idea of when Season 6 will be released in the months thereafter. While patiently waiting out Droughtlander, one intrepid fan has theorized how the show could solve its biggest mystery yet.

In the very first episode of Outlander, Frank Randall passes by a mysterious man in a beret. The audience never sees the man’s face, but his Scottish kilt and the fact that he’s seen staring up at Claire Fraser through a window implies that he’s none other than Jamie Fraser, Claire’s husband from the 18th century. Frank is rattled by this encounter, convinced that he’s seen a ghost.

Diana Gabaldon, who authored the series of books Outlander is based on, recently confirmed that it is indeed Jamie’s ghost that Frank sees on that fateful day. However, the series has yet to reveal how Jamie’s ghost landed in 1946, when he is incapable of time travel. Gabaldon once revealed that Jamie’s ghost is actually 25, which is bizarre considering that he’s well into middle-age in Season 5 of the show.

Reddit user Ksuri422 surmises that Jamie died on the same day that Claire time-traveled back to the 18th century, and that his ghost arrived to summon Claire to the past to save him from being killed by the redcoats — and he almost was in Season 1 had it not been for Claire’s warning.

We know that Claire went back in time in the period when the stones at Craigh na Dun were at their most powerful. The theorist believes that ghosts are able to travel through the stones during this interim as well and that it’s Claire's rescue of Jamie that forged their intense connection.

The theory is as good as any that have been proposed in the years since the show and books were released. Some fans speculate that Jamie died during the Battle of Culloden in Season 2 and that’s when his ghost time-traveled. Others presume that ghost Jamie is simply a projection of his consciousness through time or that he’s stuck in some sort of time loop.

In Season 5, Jamie reiterates that he can't travel through the stones, but it seems the stones have a mind of their own. Season 6 could reveal exactly how Jamie's past death led to that moment by offering up more clues about the nature of the stone's power. Either way, the idea that Jamie’s ghost can time travel side-steps the fact that a living Jamie can’t and it's a conundrum that Season 6 can work to solve.

The Inverse Analysis — Gabaldon has hinted that the mystery of Jamie’s ghost won’t be solved until the tenth and final book (she’s currently writing the ninth). However, we don’t know how long the Outlander series will carry on. Should Season 6 be its last, it’s possible that the show will skip ahead to give fans an answer regarding Jamie’s time traveling ghost the way Game of Thrones went ahead and confirmed certain storylines in Season 8. At the very least, Season 6 could drop clues about the nature of the stones and how the dead could pass through them. That might be enough information for fans to piece together Jamie’s ghost arc and put the mystery to rest.