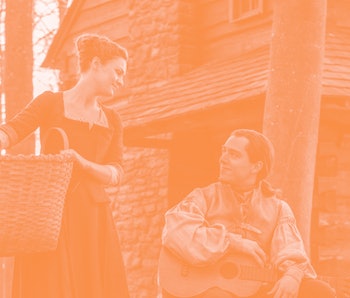 A good chunk of Outlander Season 5 was spent on whether or not Brianna and Roger would finally go back to the future. Roger was eager to return, but Brianna seemed a bit more reluctant. In the end, they both agreed to go back once they knew for sure their son Jemmy could make the journey safely.

The penultimate episode of Season 5 ended with Brianna, Roger, and Jemmy saying their goodbyes and seemingly heading back to whence they came. They disappeared right in front of cousin Ian’s eyes, but when the family emerged, Roger’s “What the devil?” made it sound like they didn’t arrive where they expected.

In Diana Gabaldon’s Outlander books, Roger and Brianna don’t go back to the future until the very end of A Breath of Snow and Ashes, the sixth book in the series. However, Season 5 is primarily based on Gabaldon’s fifth book, A Fiery Cross. That meant that Brianna and Roger’s time-travel journey was ahead of schedule and the show once again made a major departure from its source material. With that in mind, here are three possibilities for where Brianna and Roger may have ended up:

It's possible Brianna, Roger, and Jemmy time-traveled to 20th century Scotland. The reason for Roger’s confusion could mean that they appeared right in front of Craigh na Dun, the time travel stone structure they originally went through back in Season 4. Time travel is tricky and perhaps they needed to leave the 18th century the same way they came and landed back to that very spot.

After all, by Gabaldon’s seventh book, the family of three have settled in 20th century Lallybroch, Jamie’s childhood home in Scotland. So, it would make a world of sense if the stones sent them back to Craigh na Dun instead of keeping them in the U.S.

2. They travel to an altered 20th century

Season 5 contended with the possible effects of time travel on history. Just a few actions, like Claire Fraser creating penicillin ahead of time, could alter the very fabric of reality. That said, it’s possible Brianna and Roger did time travel back to the 20th century, but something’s changed. It would definitely explain Roger’s confusion over whatever he saw offscreen, suggesting the family has altered history in a major way.

1. Brianna and Roger remain in the past

It’s possible that Brianna and Roger have to stick around the 18th century for longer before heading back for good. In the Outlander books, the pair have another child together while in the 18th century, a baby girl named Amanda. The only reason they go back at the end of the sixth book is because Amanda has a heart condition that Claire can’t attend to with her limited 18th century medicine.

The time travel stones seem to have their own rules anyway, so it’s possible that Roger and Brianna simply ended up in another part of the forest, forcing them to return to Fraser’s Ridge on a more permanent basis. That way, the storyline still aligns with the books and prevents the show from having to go back and forth in time. Let’s hope that the Season 5 finale offers some closure.