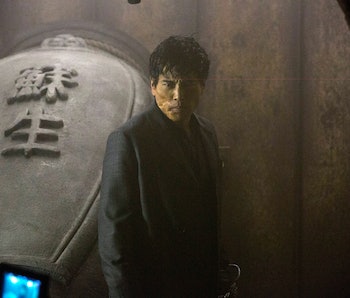 The biggest news out of Comic-Con@Home wasn't a new trailer or movie release date. Instead, it is evidence of top-down racism from a very prominent figure in both comics and television who, until last year, was the authority of Marvel Television.

What Happened? — On Saturday, Japanese-American actor Peter Shinkoda joined Tommy Walker and Geoffrey Cantor — all alumni of Daredevil — for a livestream Q&A for fans of Daredevil.

The event took place over Comic-Con weekend but was not officially part of Comic-Con@Home, the 2020 iteration of the annual Comic-Con International held in San Diego. The panel was organized by #SaveDaredevil, an ongoing fan campaign to encourage Marvel to produce another season of the popular Netflix series.

"I'm kind of reluctant to say this," Shinkoda said about ten minutes into the Zoom panel. His voice shook as if anticipating angry emails from agents as he prepared to burn a bridge with one of the most powerful TV brands in Hollywood. He apologized before deciding, "I just have to. I'm not really into protecting certain things anymore."

Shinkoda then claimed that Jeph Loeb, the prolific comics writer of multiple New York Times best-sellers and Executive Vice President of Marvel Television from 2010 to 2019, told the writers of Daredevil not to pursue a proposed storyline involving the show's Asian villains, Nobu and Madame Gao (played by Wai Ching Ho).

Loeb's reason, according to Shinkoda, was because "nobody cares about Chinese people and Asian people." Shinkoda quoted what he's heard from "many" sources, including writers and showrunners: "There were three previous Marvel movies, a trilogy called Blade where Wesley Snipes kills 200 Asians. Nobody gives a shit. So don't write about Nobu and Gao. And they were forced to put their storyline down and drop it."

Shinkoda recalled the writers being apologetic and that "their hands were tied." He briefly revealed the premise of the story, which would have involved a medical transplant that explained Nobu's backstory.

During and after the panel, Shinkoda said neither he nor Wai Ching Ho were invited to the premiere of Daredevil Season 2.

The Visible Problems of Marvel TV — Shinkoda's revelations about racism from a Marvel executive crystallize what has long been a difficult to parse (yet hard to ignore) issue with Marvel's television universe.

However diverse its shows have been, such as the ensemble Agents of S.H.I.E.L.D. — which stars Asian-American actors Chloe Bennet and Ming-Na Wen — and the teen dramas Runaways and Cloak & Dagger, Marvel Television has had a visibly limp grasp of the Asian and Asian-American experience. It is most apparent in the Netflix show Iron Fist, the 2017-2018 series about white billionaire Danny Rand who masters kung fu in a secret Chinese society.

The show's decision to stick to comics canon — keeping Danny Rand white and blonde, with Game of Thrones actor Finn Jones in the title role — haunted Iron Fist every which way. There was the time the original creator, Roy Thomas, used the term "Oriental" to describe ethnic Asians in an interview with Inverse. There was the very defensive Jones in an interview with Observer, saying "We need to start fighting for something that really matters ... Not just over some Netflix show.” There was the time Iron Fist minimized the undocumented Asian comics superhero Blindspot into an inconsequential Easter egg. There were the terrible fight scenes.

And then there was Jeph Loeb.

In 2016, Loeb said the show was keeping Danny Rand white, rather than rewriting him to be Asian-American or mixed race, on the basis that he needed to be an "outsider." The "outsider" reason is an overly-common, overly tired explanation from white comic creators who are often dismissive of the very real alienation Asian-Americans and Asians living abroad feel towards their ethnic homelands.

A year and a half later in 2018, at the panel for Iron Fist Season 2, Loeb walked onto the Hall H stage of San Diego Comic-Con (back when it happened in person) wearing a karate gi and a Mr. Miyagi-style headband. However playful Loeb was being, the moment felt like a careless confluence of Asian cultures that seemed to plague all of Iron Fist as a whole.

Since Shinkoda's comments went public, a small handful of telling tweets from Marvel writers with personal accounts of Jeph Loeb revealed a more telling picture of the comics/TV executive.

Alejandro Arbona, a comic book writer who spent several years working for Marvel as an associate editor, recalled Loeb as someone who would "say the cruelest, pettiest things to people, even people way below his station, with this devilish grin as if he was just such a cute little stinker."

The Inverse Analysis — While Marvel has long featured diverse characters from diverse storytellers, it is unfortunately also expected to have had individuals like Jeph Loeb. In 2017, Marvel underwent scrutiny in promoting its now current Editor-in-Chief C.B. Cebulski, who for years wrote under the Japanese pseudonym Akira Yoshida and even gave interviews "in character" as a native Japanese who learned English from American comics.

And way at the top of Marvel sits Ike Perlmutter, the former CEO of Marvel who still holds the title chairman of Marvel Entertainment. Jeph Loeb notably reported to Perlmutter in his time as EVP of Marvel Television.

A reclusive billionaire who has rarely been photographed and never gives interviews, Perlmutter has been blamed for Marvel's earlier resistance to diverse movies. He is alleged to have said Black people "all look the same" and was blamed by both Kevin Feige and Disney's Bob Iger for why the studio didn't produce Black Panther and Captain Marvel sooner — both of which have grossed billions of dollars in box office revenue.

Ike Perlmutter is also a Trump donor and, in 2017, was reported to have been among the President's outside advisors at Mar-a-Lago.

You can watch Shinkoda in the #SaveDaredevil panel below.