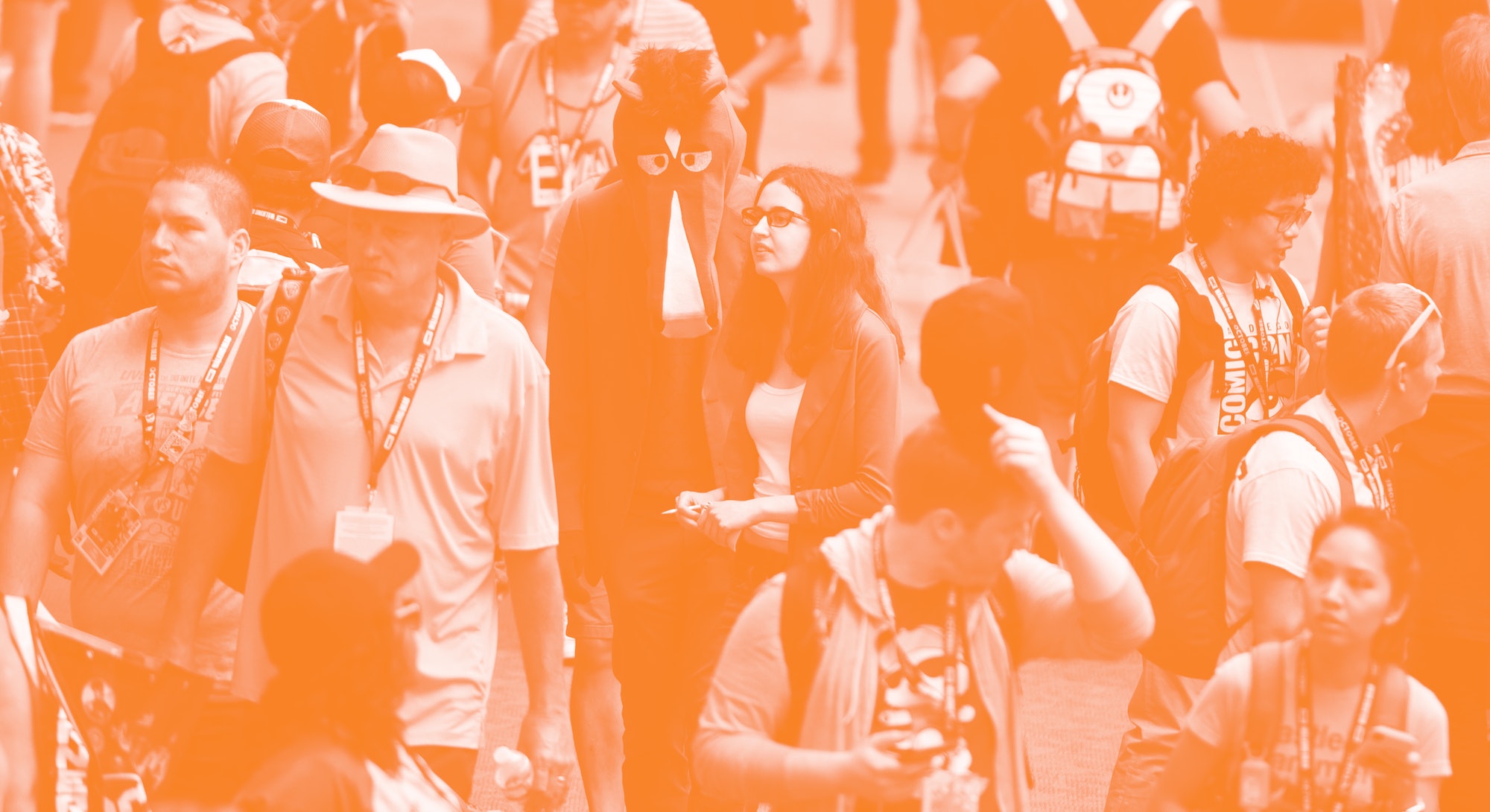 There's no feeling like walking into a fan convention for the first time.

The low hum of constant chatter. The long lines. The glee that hits you when you see someone cosplaying your favorite character. Whether it's San Diego Comic-Con or just a super-regional small con, it's an entirely new world full of like-minded people passionate about all manner of media.

But in 2020, Comic-Con has moved online. There is no "entrance," just a YouTube link to pre-recorded Zoom panels. Yes, you can marvel at cosplay on Tumblr, but there's nothing like witnessing it in real life while you wander through the dealer room. It's a lot easier striking up a conversation about an anime with someone wearing merch while in line than it is on Twitter.

It's undeniable: The center of the con experience is the hallway.

This phenomenon of a communal area where people can strike up a conversation with no real purpose is known as a "third space." This term was coined by sociologist Ray Oldenburg in his book The Great Good Place, where he defined it as "the core settings of an informal public life." The "third" in third space refers to a place other than home and school/work, a place where there's a sense of community but no real membership. An example that's often used is a bar or a coffee shop, a place where people can just be and chat.

At conventions, these third spaces are so ubiquitous they can shift the focus entirely. As Internet linguist Gretchen McCulloch said in her book Because Internet: Understanding the New Rules of Language, "At conferences, the talks are merely a pretext for assembling people with shared interests so that we can run into each other in the hallways. In the best third spaces, it takes me half an hour to travel the length of a single hallway because I run into several people who I absolutely must talk with."

Now that Comic-Con is only that pretext, McCulloch tells Inverse there's no way for those spontaneous meetups to happen.

One of the difficulties of virtual conversation is a lack of visual signifiers. In the digital world, you can only present yourself through avatars. There's no sense of openness to talk about shared interests.

This is something con organizers don't often consider because these third spaces come for free. If you assemble a group of people with common traits in a common space, they will establish their own socializing community, even if it wasn't the focus of the event entirely.

So what's the best way to build a third space for an event like Comic-Con that usually has them built-in? McCulloch suggests a solution used by an academic virtual conference she previously attended.

"They set up a Discord server with live streams of talks, but they had all these different channels, some of which were explicitly not topic-based," she says. "So they would have channels called The Lobby, or The Bar, or just Spontaneous Room One, Spontaneous Room Two."

This is a great solution for those breakout conversations that could occur in real life, but not in a single live chat feed. Just like how you could wander away from a crowd in a single room, these conversations could branch off into their own separate channels with a smaller, focused group. Another suggestion McCulloch offers is a proximity-based voice chat app like Online Town, which creates virtual "spaces" where your avatar can explore and group with conversations. The closer your avatar is to the speaker, the louder the voice, so you're free to wander in and out of chatter.

These solutions are useful, but not scaleable to the point of huge events like Comic-Con. Thousands of people gathering in a convention center can't be replicated on a discord server. Still, there are some small changes to the current "Comic-Con@Home" model that could aid the loneliness of watching from home.

YouTube has a "Premieres" feature that allows a video to have a single "release," including a live chat that can be watched back later. Even if the panel is pre-recorded, there's still some sense of community happening in that live chat. Without it, the video starts whenever you click the link, so everyone watches it at their own pace. It may be more convenient, but it's not as communal.

Ultimately, the lack of a "third-space" at virtual cons may push organizers to rethink what an event like San Diego Comic-Con is really about.

"If you want to just see interviews with your favorite celebrities, you could already sit at home and watch them be interviewed," McCulloch says. "The reason people go to cons is for the feeling of being in the same space as other people who like the same things. It's not just about the programming, it's about being around the type of people who want to witness that programming."

Hopefully, this time next year, Comic-Con can be held in person in San Diego without issue. But even then, Comic-Con@Home can serve as a learning experience that conventions are truly held in the in-betweens, the inside jokes, the new friendships, and the sense of belonging.