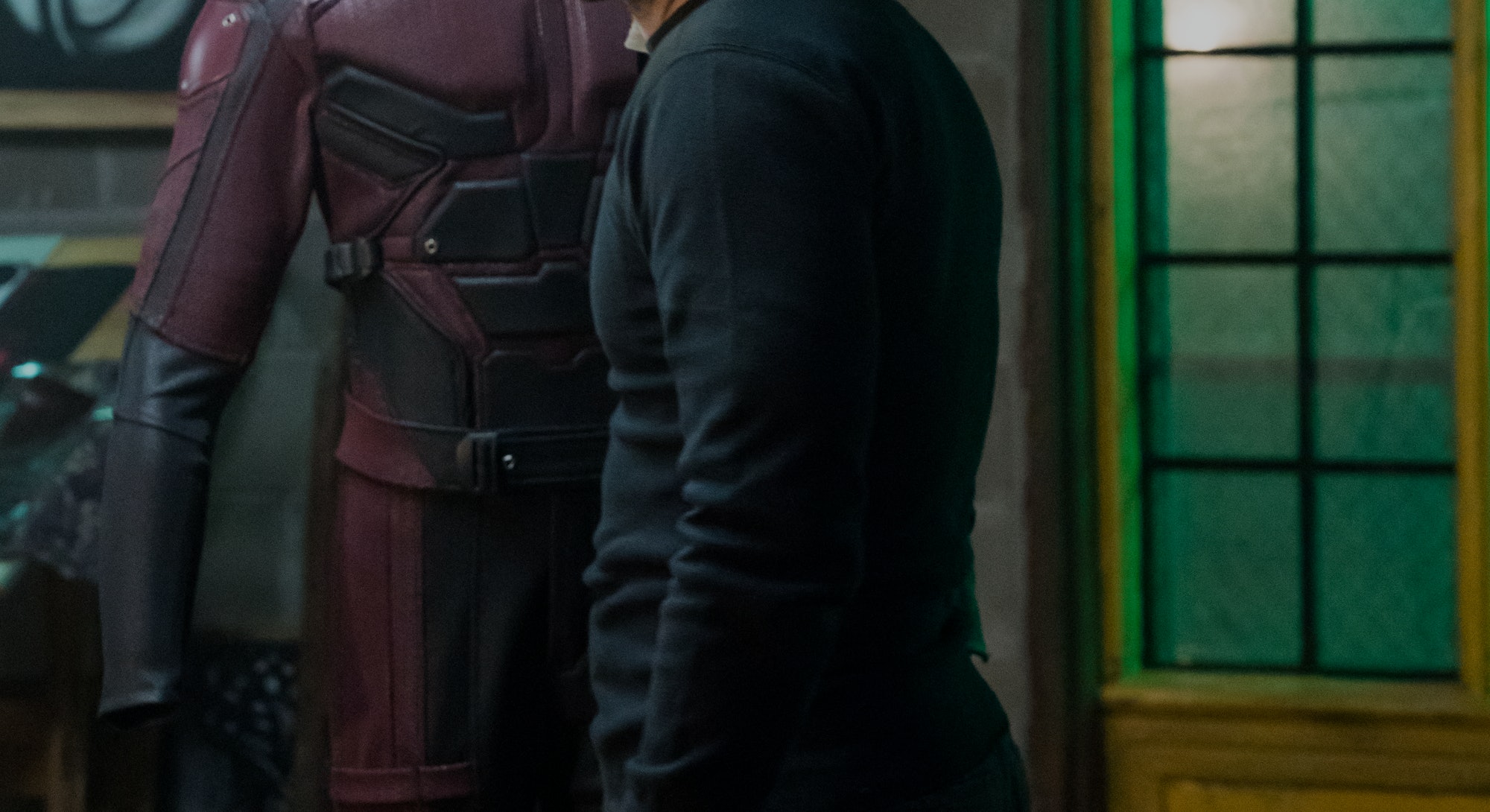 It would have been a mistake if the Marvel Cinematic Universe actually all connected, and there’s nowhere that’s more clear than in Daredevil Season 3. Instead of letting the catastrophic events of Avengers: Infinity War dictate Netflix’s world of grounded superheroes, these shows have room to breathe. That’s not always a good thing (see Jessica Jones Season 2 or pretty much all of Iron Fist**), but in the case of Daredevil* it means a strong stand-alone season that reminds us why we fell in love with Matt Murdock’s world (but not Matt Murdock) in the first place.

Three years after it kicked off the Marvel/Netflix franchise, Daredevil returns, refocused and reborn in a very liberal adaptation of Frank Miller’s enduring storyline, Daredevil: Born Again. Set after The Defenders, Matt Murdock (Charlie Cox) wakes up in the orphanage where he grew up and under the care of a nun, Sister Maggie (Joanne Whalley), whose personality is as bitter as the scotch she drinks.

Separated from Karen (Deborah Ann Woll) and Foggy (Elden Henson) — who seem to be doing fine without Matt (but could sure use Daredevil’s help) — Matt Murdock dedicates his life to reforging his skills as the Devil of Hell’s Kitchen.

And he needs to do it fast after his main nemesis Wilson Fisk (Vincent D’Onofrio, who turns up his “Fiskness” to eleven) is released from prison and engages on the warpath.

Throughout the first six episodes provided for this review, it’s evident that new showrunner Erik Oleson knows what’s plaguing Daredevil, and by extension the rest of the Netflix MCU. Oleson addresses these problems in a liberating way, zeroing in on Matt Murdock as a broken individual rather than just another superhero in a world overrun with them. In fact, as far as Daredevil is concerned, there are no other superheroes, save for a few other “vigilantes” like Murdock.

Oleson’s solution to Daredevil’s problem also fixes a bigger issue with Netflix’s MCU: the balance between realism and fantasy. Ever since ninjas appeared in The Punisher’s crosshairs in Daredevil Season 2, this universe has struggled to maintain the sense that its set in a “real” New York City — one without Avengers Tower in its skyline.

This issue was most obvious post-Defenders, where mystical gobbledygook always felt more obnoxious than productive. It’s why no one took Iron Fist seriously: For all its talk of dragons Netflix didn’t have the budget to actually show us one.

Breathe a sigh of relief. There are no ninjas in Daredevil. No “Easter egg” references to the Avengers and their catastrophic failure in stopping Thanos. New York was already messed up before Thanos came for his Infinity Stones, and that hasn’t changed.

Definitely don’t listen to Jeph Loeb, who will forever assure viewers that Daredevil is in the MCU (like he did a week ago at New York Comic Con). Actually watching Daredevil proves otherwise, and it’s for the best. Take it from me, a Marvel fan who would still jump for joy if any of the Defenders showed up even for a second in Avengers 4.

That’s not to say Daredevil is flawless. In so many ways the show is still very much Daredevil, where an unlikeable protagonist always makes the most irresponsible, self-destructive choices imaginable. It is absolutely Matt Murdock’s fault that he’s in pain, and it’s absolutely his fault he stays that way. Even for a hardcore Catholic (I speak as one), Matt Murdock likes torturing himself with his guilt, and Season 3 overly relies on this recurring theme.

Luckily, it’s the new elements that successfully distract from the shortcomings. Two new characters, both FBI agents with wildly different stories, lend the season identity and create some exciting conflict. Agent Nadeem (Jay Ali) is a financially troubled family man tasked with serving as Fisk’s handler, fogging his moral compass. To use Dungeons & Dragons terms, his character alignment frequently explores the spectrum between Lawful Good and Lawful Evil, and it all works because of Ali’s compelling performance.

But it’s the other FBI agent that steals the show. After much ado, Marvel caved in and finally confirmed that Wilson Bethel’s “Agent Pointdexter” is Bullseye.

And Bullseye RULES. While a physical match for Matt Murdock with a “super power” of exceptional aim with anything he can get his hands on — bullets, playing cards, office pens — it’s Bullseye’s psychological make-up that makes him utterly engrossing. A disturbed individual with severe abandonment issues, Dex is compelling in the way one becomes engrossed in sordid true crime: Difficult to listen to, but a mystery and a story too good that you cannot look away.

Whatever magic was siphoned from the first season of Daredevil is still gone in Season 3. But Daredevil is also a lot better than it’s been in years. The action is top notch — Comic Con fans went nuts for a major fight scene — and everyone in the cast clearly still cares about this material, this world, and this corner of the Marvel Universe. And it’s just a much easier show to enjoy without the looming threat of a crossover in six months.

Moving forward, it will take very bold creative decisions for Daredevil to fully resurrect itself. The superhero arena is a dozen times more crowded than when Matt Murdock first stepped out of the shadows. Even with all references to the MCU removed from his show, it’s still too easy for a fatigued viewer to switch to Black Panther on Netflix if they Daredevil starts to drag. But give this season a shot. It shouldn’t surprise you that Daredevil won’t go down without a fight.