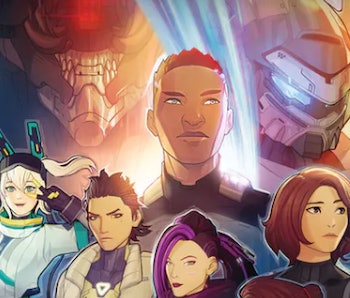 This article about Season 1 of the anime gen:LOCK was originally published on January 31, 2019 and updated on April 25, 2021 following the release of the season. Read on for the original article, with some new changes to reflect the latest updates on this topic.

The next generation of mecha is here, and it’s coming from Rooster Teeth. The creators of the long-running comedy Red vs. Blue and the fantasy action series RWBY take to the skies with their own take on the giant robot anime genre.

Executive produced by the studio’s head of animation, Gray G. Haddock, gen:LOCK, is set in a near future where Earth’s civilizations are locked in a devastating global war.

After almost a year of reporting by Inverse, including interviews with the show’s creators at RTX, New York Comic Con, and a visit to Rooster Teeth’s studio in Austin, Texas, here is the definitive guide to everything you need to know about the series.

Set 50 years in the future, gen:LOCK depicts a world at war fought with chunky, giant robots controlled by human pilots. When a scientific breakthrough introduces a new breed of mecha — better, faster, stronger, and more agile than a cheetah — the next generation is led by hot shot pilot Julian Chase, who commands a crack team of specialists to save the world.

When was gen:LOCK’s release date?

Gen:LOCK premiered on January 26, 2019 on Rooster Teeth’s streaming channel FIRST. However, fans who used the platform to watch RWBY on December 22, 2018 were treated to a surprise series premiere for the new show. The first two episodes aired together, with each episode airing singularly weekly. Additionally, Adult Swim aired gen:LOCK from August 3 to September 21, 2019 in their Toonami block, cutting down the episodes to 23 minutes.

What is the mecha anime genre?

gen:LOCK is the studio’s take on the mecha anime genre, a popular subgenre of sci-fi that envisions towering, humanoid robots, often with a human pilot. The genre was innovated by Japanese artist Mitsuteru Yokoyama, in his 1956 manga Tetsujin 28-go which was imported to the West as the animated series Gigantor.

Spider-Man also had a giant robot once (in Japan, where else), and the Beastie Boys paid homage to mecha in the music video for their 1998 single, “Intergalactic.” In 2017, director Nacho Vigalondo transformed the genre into the acclaimed black comedy film Colossal, which starred Anne Hathaway.

“All of their mecha is heavily armored, short, and squat, and not that humanoid,” Haddock explained in an August 2018 interview about the mechas seen at the beginning of the show. “They’re just walking tanks, with cannons where their arms should be. The gen:LOCK team shows up, and they represent a generational jump in technology.”

He added: “They’ve got more human-shaped mecha that can move and fight similar to a human can, at a four-story-tall scale. They’re up against an enemy [who has] less of a conscious of how they’re evolving their science.”

Evan Narcisse, a columnist for io9 and co-writer of Marvel’s Rise of the Black Panther with Ta-Nehisi Coates, also serves as a writer on gen:LOCK. At RTX, Narcisse said the technology seen in gen:LOCK will evolve, and Haddock adds that it will explore the diverse sub-genres of sci-fi mecha anime.

“The first season of gen:LOCK, for me, it feels like a complete technology arc,” Narcisse said. “We see the technology in one place, and it ends in a different place when the season ends. Like Iron Man, you watch his armor evolve over the decades. We are watching this technology iterate in ‘real-time’, and the characters react to the developments and technology.”

“The show is a tribute to mecha shows,” Haddock tells Inverse. “It’s not just a military sci-fi show, even though the mecha will be hard-edged and military in function. Over time, the mecha will evolve and become super mecha. Maybe in Season 2 we’ll do quadrupeds or transforming robots. I wanted to play with all the classic ingredients you think of when someone says ‘mecha show’ but ground it in a way you understand why the team is driven to introduce technology year by year.”

In addition to being a mecha series, the show also takes cues from Masamune Shirow’s Ghost in the Shell and Uncanny X-Men by Marvel.

Who is the cast of gen:LOCK?

gen:LOCK sports an all-star cast that includes talent from outside the Rooster Teeth family. If you’ve watched Black Panther, Game of Thrones, Doctor Who, Billions, Cowboy Bebop, the Twilight film series, and more, then you’re familiar with the show’s cast.

You can watch and listen to the show’s principal characters interact in a preview of the pilot episode below.

How did gen:LOCK partner with DC Comics?

At New York Comic Con 2018, Rooster Teeth announced a huge partnership with DC Comics, and the famed publisher will release comics based on Rooster Teeth properties like RWBY and gen:LOCK. You can learn more about that partnership in our report from October 2018.

Was gen:LOCK renewed for another season?

Yes! In October 2019, it was announced that the show would be renewed for Season 2. gen:LOCK set to return in 2021 with episodes being hosted on HBO Max before moving to FIRST after 90 days.