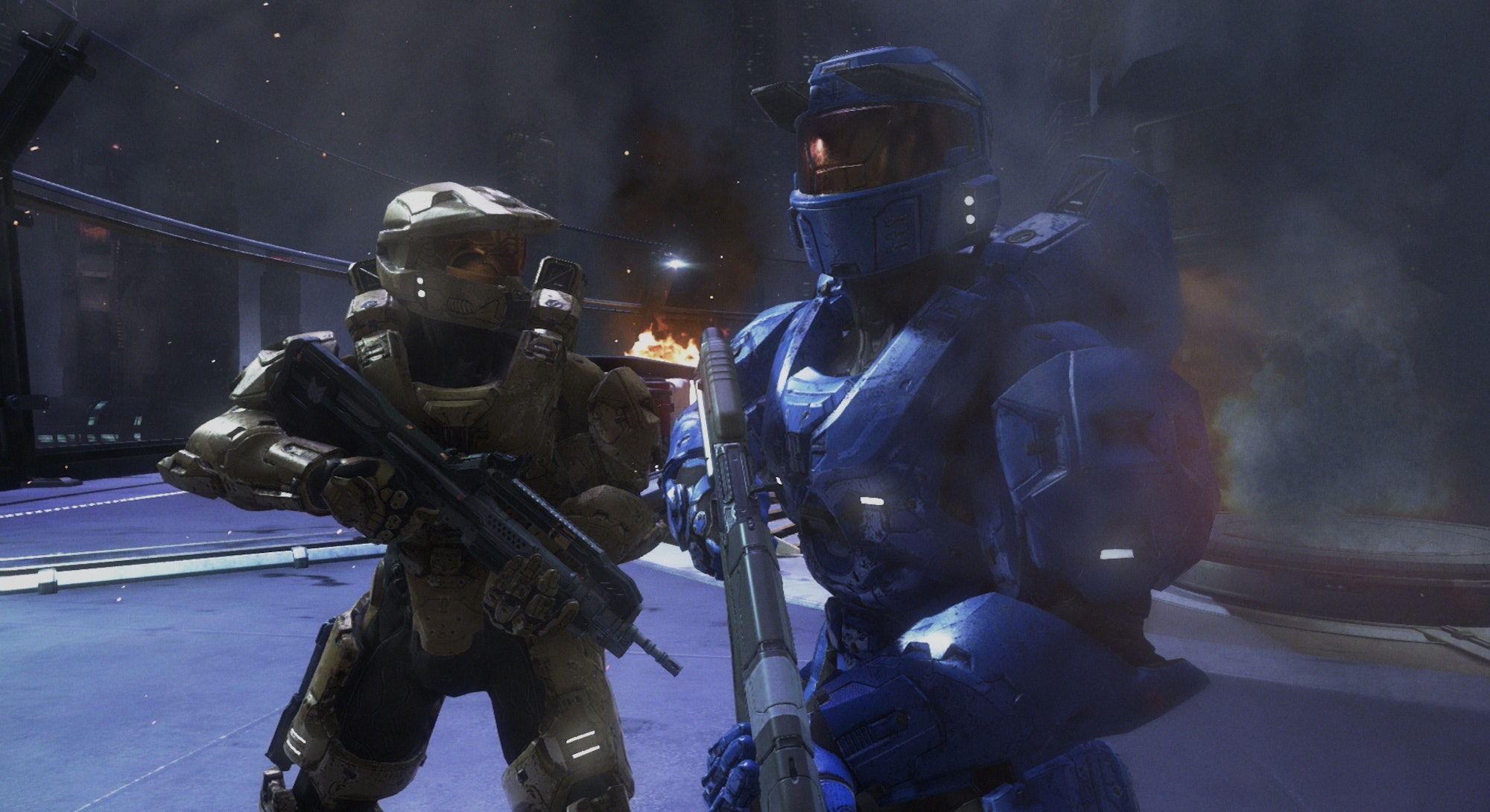 Burnie Burns remembers April 1, 2003 like it was yesterday. The CCO of Rooster Teeth was uploading Red vs. Blue to the internet for the first time. In a two-minute short, titled “Why Are We Here?”, a pair of space marines in red armor stand guard on a desolate canyon talking about — purpose, and stuff. Two enemy soldiers in blue, spying from a high vantage point, bicker over who gets to look through the sniper rifle. The video became the first episode of Red vs. Blue, the comedic space opera that just began its fifteenth season.

“I felt like we were embarking on something new,” Burns told Inverse about the night Red vs. Blue was born. “Putting it up and watching it explode was incredible. It wasn’t an overnight success, but it’s the closest thing we’ve ever experienced.”

Today, Rooster Teeth a full-fledged studio in Austin, Texas that employs more than 250 people and produces a number of original shows. It began as a clique of drunk video gamers — made up of Burns, Geoff Ramsey, Gus Sorola, Dan Godwin, and Jason Saldaña — who teamed up to launch a review site they called Drunk Gamers. After awhile the site shut down, but the group reconvened to pursue an idea they had previously discussed: a comedy show made inside of Halo, the Xbox first-person shooter game synonymous with late-night LAN parties.

Using a few Xbox consoles running the game on a local-area network and modified software, the crew turned in-game avatars into puppets and gave them their own voices when they recorded the action. The process was a new digital art form that was emerging known as “machinima.”

Vaguely set in the Halo universe, Red vs. Blue follows two color-coded factions engaged in a civil war being waged for no discernable reason. After five seasons of mishaps in the game’s godforsaken Blood Gulch map, the show expanded its scope and adopted complex animation; renowned digital animator Monty Oum designed action scenes beginning in 2010 until he passed away in 2015. Even as it became more ambitious, the show always remained a comedy, a fever dream of Monty Python and South Park doing Stripes in space that caught the attention of the internet’s gaming audience early.

As the show blew up, Rooster Teeth faced a number of growing pains. Microsoft and Halo creators Bungie gave the Austin studio their blessings and even became a licensed partner. But the studio operated independently and continues to do so, and the company had to figure things out on its own. Having emerged before YouTube, it was in the early years costly to keep the show rolling.

“There was no online video, no pre-rolled advertisements,” Burns explained, adding they couldn’t inflate their stats to monetize content. He contrasts the experience to today’s makers: “I think people take for granted that hosting video costs money. That’s an expense most creators today do not have, and we had it.”

In the early days of the show, they paid a co-location facility $13,000 to host their videos. “I don’t know many hobbies that cost that amount of money,” says the CCO. (Today, producing an episode can cost anywhere between $15,000 to $100,000.) To cover costs, Rooster Teeth adopted a paid subscription model and sold branded merchandise. “It was just necessity as the mother of invention. We had to do it. We didn’t have a choice.”

Rooster Teeth has perfected the art of survival and adaptation over the years. Filming in new games has been a consistent challenge. Rooster Teeth learned that the hard way when Halo 2 arrived in 2004. “We jumped in Halo 2 right as it came out, and we made mistakes,” Burns recalls. “[The game] required us to spend time with the new engine, figuring out what it can do.”

Miles Luna, who joined as a writer in 2011, said starting production in a new game is “like opening a present: You have no idea if it’s going to be awesome or not.” While animating in 2010’s Halo: Reach, an unavoidable “twitch” occurred every two minutes, forcing editors to work around it. In 2012’s Halo 4, avatars couldn’t move without a gun. “I thought, ‘Game over man! It’s fucking broken,’” Luna remembers screaming. “We couldn’t do slow walking shots without making it look like someone was planning to murder someone. But that’s the stuff you cut around, you shoot around.”

As Red vs. Blue evolved, so did the internet. A few years into the show’s run, the rise of YouTube loomed large. To Burns, putting Rooster Teeth’s videos on YouTube felt like giving content away. “When we first saw YouTube, we viewed it as a competitor,” Burns recalls. Streaming wasn’t refined in the mid-2000s, which made the studio reluctant to join. But the insistence of a friend, who hosted the early YouTube hit Ask a Ninja, compelled them to give it a shot. After uploading to YouTube, awareness for Red vs. Blue spiked dramatically.

Burns still believes that putting things on YouTube is more or less giving content away — new episodes premiere on Rooster Teeth platforms before YouTube — but he also acknowledges how seismic YouTube’s impact has been. “We’re always trying to find new audiences and help them discover us and YouTube is critical to that. You have to be part of the conversation.”

With 15 seasons and counting, Rooster Teeth has earned a diverse fandom spanning different age groups, but the company remains committed to entertaining its most hardcore fans. Burns believes the serialized format of Red vs. Blue — a departure from the sitcom accessibility of most comedies, even those online — helped create that devotion. “We were told [by other writers] you can’t make a serial. It’s gotta be a sitcom. People want to drop in, and it won’t matter when it took place.” Burns thought that was bunk. “Why would I write for those people? Let’s write for people that show up every week. Our dedication to those audiences, I think, really paid off.”

Still, Rooster Teeth is aware of the need to clarify things along the way. The new season, which premiered on April 2, will take the perspective of a war reporter trying to figure out what went wrong with the original Reds and Blues. “The idea behind the story is that the heroes of the last 14 seasons have turned to a life of crime, and she’s trying to figure out why,” explains Nicolosi. “She’s recapping their experiences at Blood Gulch and beyond, and as she’s doing this she uncovers a mystery along the way.”

“By introducing this character, who is learning about the Reds and Blues, it got fresh eyes on these characters,” adds Luna. A journalist-type character was conceived of back in the show’s second season: Doc, who became a medic when a war journalist was deemed too close to the then ongoing War in Iraq. “We felt having an embedded reported was a little bit close to a war commentary,” Burns says, adding that it “came with a great weight, narratively.” Now, the team feels, it’s time to take on that weight.

The company has expanded its offerings, with shows that run the gamut of geek culture and interests: The apocalyptic Day 5 is the studio’s first serious drama, while the challenge series Million Dollars, But… is a classic stunt comedy. Always Open, a frank roundtable on sex and dating, is the middle of its second season. And then there’s RWBY, Rooster Teeth’s first original anime and its other biggest franchise. Created by the late Oum in 2013, Burns says the strategy for RWBY was that “action will translate globally than comedy, and that’s proven 100 percent true.” The show is recognized as one of the first American-made anime to officially be released in Japan.

Despite the increasingly broad portfolio, Red vs. Blue is the flagship juggernaut, a reality that Rooster Teeth tries its best to grapple with. “We know our audience came from Red vs. Blue. It’s what people fell in love with, and the spirit of our company was built around that,” says Burns. But the CCO admits it can “get a little frustrating” that Rooster Teeth is inseparable from the yelps of Halo puppets. “We’re still waiting for the day it’s something else [we’re known for], and we’re about there. RWBY is a massive franchise that has way more potential than Red vs. Blue ever did.”

It’s been a long time since five drunk gamers uploaded a Halo spoof online and watched it catch fire before their eyes. Burns remembers how it cost 50 bucks for another Xbox controller to make a show that wound up selling “millions and millions” of DVDs. Even now, with content creation easier than ever, getting Halo characters to play out a profane comedy of errors reveals what a cocktail of creativity, ingenuity, and luck can accomplish. “I think Red vs. Blue is a great example of what one in the digital age can do with inspiration and a lot of passion,” says Burns. “There are many ways to play a game.”

Update 4/12: A previous version of this article incorrectly mentioned Rooster Teeth founders Joel Heyman and Matt Hullum as part of Drunk Gamers. It also mentioned Drunk Gamers reviewed only one game. They reviewed many games but were officially sent just one by publishers.