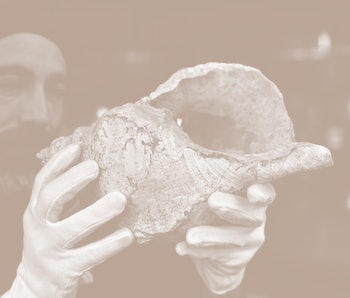 It's hard to know what ancient history sounded like, but today's lead story allows you to turn back the clock. Before we get to that, today in history, a famous telescope started to get a crucial upgrade.

When NASA sends robots into space, they are typically never seen again by human eyes. That was not the fate of the Hubble Space Telescope, which was designed to be regularly serviced by astronauts. The Hubble's second servicing mission launched today in 1997, upgrading the telescope with new instruments that allowed its wavelength range into the near-infrared for imaging and spectroscopy.

These instruments would allow the Hubble to peer deep into space, allowing it to study supermassive black holes and create the first clear view of the universe at near-infrared wavelengths. That's a pretty impressive upgrade.

Our question of the week: Are you ready for Valentine's Day this weekend? Real life has been harsh lately, so we were wondering: What's your favorite fictional couple? Love, as comic author Tom King recently mentioned in his Inverse interview, is a powerful driver in stories. Leia and Han, Korra and Asami, Wanda and Vision. Love is a battlefield, and we want to hear which fictional couple has you picking up arms.

Respond in our Google form, and we'll post our favorite answers next week!

This is an adapted version of the Inverse Daily newsletter for February 11, 2021. Subscribe for free and earn rewards for reading every day in your inbox.

Some people are lucky enough to be natural public speakers. But for the rest of us, it can be less an occasion to show off one's mastery of a subject and more a recurring stress dream.

It's an all too familiar feeling — your palms are sweaty, knees are weak, and your arms are heavy. You're about to get on stage and deliver a speech. Whether it is at a wedding, a work conference, or a family reunion, public speaking is more often a source of dread than it is inspiration.

The reason why is partially to do with our biology — even disrupting circuits in our brain, according to some studies — but thankfully, science may hold the answer to this problem, too. In a new study published Wednesday in the journal PLOS ONE, scientists reveal how a technical fix can combat public speaking fears: virtual reality headsets.

Interestingly, the effects of VR headsets on confidence seem to be split between genders.

What they're saying: “Individuals low in self-efficacy might have an extra benefit from seeing themselves — their doppelgänger — already perform the desired interpersonal skills behavior.” —Emmanuelle P. Kleinlogel, Faculty of Business and Economics, University of Lausanne, and co-authors.

How men might find their best role models in themselves →

After more than 50 years, NASA has turned its eyes back on the Moon. The space agency is not only returning humans to the Moon through the Artemis program by the year 2024, but it is also planning on building the first orbiting outpost around Earth's natural satellite.

In order to do this, NASA is relying on its public-private space partnership, selecting SpaceX to launch the gateway components to their position in lunar orbit.

What they're saying: “The Gateway is the cornerstone of the long-term Artemis architecture,” former NASA administrator Jim Bridenstine.

Fictional movies can offer a fascinating look into real-life science. Our newest series, Reel Science, explores how deep these connections can run.

Netflix's latest drama is, if nothing else, quiet. In contrast to the much more outlandish Bridgerton, the streaming platform's new prestige period film feels like a surprising choice for the platform to throw its weight behind.

But buried underneath the movie's soft, gauzy color palette and muted tones is the story of one of the most important archaeological discoveries in European history, which was overshadowed by the advent of World War II.

The Dig, which was released on January 15, 2021, focuses on Basil Brown. Brown was a middle-aged, self-taught archaeologist living in England on the cusp of World War II in 1939. Using a story founded on truth, The Dig explores Brown's past and offers an amazing lesson in British archaeology. Inverse's Tara Yarlagadda goes deep on the connections that you might miss otherwise.

What they're saying: The “most impressive medieval grave to be discovered in Europe.” —the British Museum, on Basil Brown's discovery.

How The Dig tells a real-life science story →

WandaVision is the first truly astonishing show of 2021, with both Paul Bettany and Elizabeth Olsen giving powerhouse performances. Vision and Wanda Maximoff are given true depth in a world unlike any other in the MCU. It all amounts to something that Eric Francisco's review calls “very clever and immensely fun.”

But the show has begun straddling the line between comedy and horror in unexpected ways. It's becoming harder and harder to tell good from evil on the show. Each episode seems to offer not just a trip down television's golden years, but a fascinating psychological drama. After the next episode this Friday, make sure to check out Inverse for the latest breakdown.

Elon Musk, NASA, China. It seems like everyone is trying to get to Mars these days. Given the vast number of mysteries still unanswered about the planet's past, and the exciting potential of living on a new planet, who can blame them? But all this talk of the future ignores the planet's current denizens: robotic rovers like NASA's Curiosity, which has been exploring the Red Planet since 2012.

By now, nobody knows the surface of Mars better than Curiosity. The robotic explorer has been venturing across the Red Planet for more than seven years, traveling across the Martian terrain on its four wheels.

Meanwhile, we mortals could only try to imagine what the cold, dry, desolate planet looked, felt, and sounded like — until now. A new video captured by Curiosity puts us right on the surface of Mars as though we were there, revealing the mysterious, ghostly beauty of the planet's barren landscape.

What they're saying: “Destiny.” —Elon Musk, SpaceX CEO, on seeing this video.

The sound of music — Listen to the haunting music of ancient peoples for first time in 18,000 years

Music and humanity have been intertwined for as long as we have been around. When you think of classical music, you might imagine a tune from Beethoven's “Moonlight Sonata,” or one of Mozart's piano concertos. But you might want to think far, far older.

These works are considered foundational to the European classical music tradition, but in truth, the fundamentals of music predate these masterpieces by thousands of years. Our modern fascination with music is embedded in cultural practices honed over millennia, but due to the paucity of written records, it is difficult to know what this music would have sounded like to our ancestors' ears.

Now, thanks to new research, you can listen to some of this ancient music for the first time in almost 18,000 years.

What they're saying: “It is an incredible emotion to hear these sounds — it only happens once in a lifetime!” —Carole Fritz, senior scientist at the French National Center for Scientific Research, to Inverse.

And that's it for the Daily! If you're looking for more, check out seven new sci-fi films on HBO MAX you need to watch ASAP.

More like this
Science
5.24.2022 2:00 PM
What your cat is really trying to tell you if they pee everywhere
By Claire Cameron
Science
11 hours ago
Ancient Roman man lived in agony before Vesuvius eruption killed him — DNA analysis
By Claire Cameron
Science
5.22.2022 1:00 PM
10 years ago, one SpaceX launch showed NASA they could work with Elon Musk
By Allie Hutchison
Related Tags
Share: