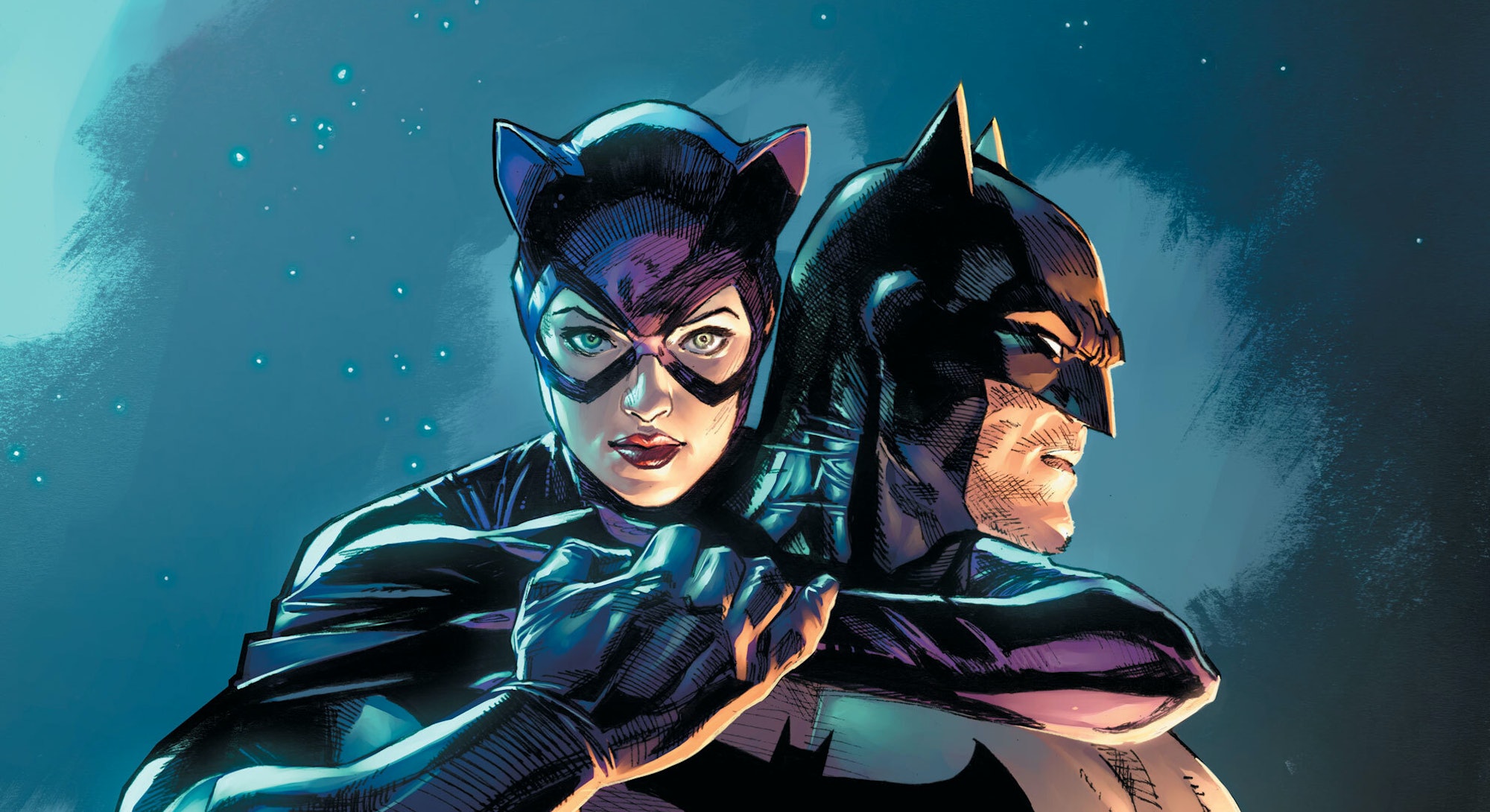 The older I get, the more focused I am on love."

Since his rise in the mid-2010s as a must-read comic book writer with an unlikely background in the CIA, 42-year-old Tom King has used superheroes — both ones you know (Batman) and ones you don’t (Mister Miracle) — to explore themes often avoided in the stereotypically masculine genre: Love and marriage.

Coincidentally, when Inverse gets a hold of King in mid-January, a week after the attempted insurrection in the Capitol (not far from King’s home in Washington D.C.), it’s the 20th anniversary of his first date with his wife. In January 2001, King and his soon-to-be-wife Colleen spent the inauguration of the Bush administration registering objections by getting pleasantly plastered at the National Mall. Needless to say, a lot has happened since then.

“We’ve been through two wars,” King explains. “The bar exam for her, becoming a writer [for me]. Three children. My dog. It’s the journey of my life. It’s the most important relationship in my life. It leaks into my writing all the time.”

A child of “severely divorced” parents who “hated each other with every ounce of their being,” King built his literary career on the power of compassionate, and complicated, love between super-beings:

Love doesn’t underline all of King’s stories. But if three’s a trend, then King writing love stories is tradition. The reason is that King finds love to be “the most powerful tool” that keeps readers turning the page. “There’s something inside you that roots for people to fall in love,” he says. “I was just watching some stupid TV show. It was just two people, they went on two dates, and you’re so rooting for them. The stakes are so high, so fast.”

And love is in the Gotham City air again in King’s newest 12-issue series, Batman/Catwoman for DC, with collaborator Clay Mann. A sequel to his Batman series, the story again dives into the romance between Bruce Wayne and Selina Kyle, who are now definitely married. This time, the story zig-zags across three timelines that span Batman and Catwoman’s entire relationship.

King claims Batman/Catwoman isn’t another one of his love stories, but in its premise of two icons who influence each other, it’s impossible to ignore how their love is tested in a hostile place like Gotham.

“It’s an examination of two very different people,” King says. “One is a person who doesn’t change. When his parents were killed, he became Batman and stayed that way. Catwoman has a diverse life. She’s turned from villain to good guy. Who you are changes based on what you are made of.”

In an interview with Inverse, King unpacks his obsession with superheroes and their love lives, and how Batman/Catwoman isn’t like all the rest.

Happy 20th anniversary! What did you and your wife do for your first date?

My wife and I attended a pre-inauguration concert for the 2000 election. We were not fans of the new administration, and we were young and new to D.C. We decided to register our objections by sneaking in with some booze and getting very drunk while Jessica Simpson serenaded Dick Cheney in front of the Lincoln Memorial. Like much of what followed, it was quite surreal.

Are Batman and Catwoman right for each other?

Because they're not right for each other, they're right for each other. On one level it's the cliché — the cop falling for the criminal. Makes for great writing because you have conflict. But these two are mirror images. They’re people who had childhoods where they were left alone and had to build their identity, and not from an image of their parents. They reacted differently. She became a criminal, he became Batman. He saw the world in black and white, she sees the world in gray. I think that chemistry is why those two mix.

Batman lives by one ethos: fight criminals. And he falls in love with a criminal. [In Batman’s origin story] the criminal reaches for the pearls, and Batman ends up falling for someone whose sole purpose is to steal jewelry. That’s some fucked up Freudian shit, man.

You’ve said in other interviews that Batman/Catwoman isn’t about romance. Instead, it’s about being a good person. What does that mean?

I’ve written a lot of books about falling in love and finding comfort in each other. This isn’t that. It’s about how two people affect and can’t affect each other. [Catwoman] came to Batman and denied herself — this aspect of her, I have to break the law — to be with him. She changes for Batman. Is that a good thing or bad thing? When he dies, does she revert to who she was? Or was that always what she was? It’s a look at what it means to be alive in a very comic book way.

Did you have a crush on Catwoman when you were a kid?

I don’t think I had a crush. I’m a ‘90s kid, so I grew up with Jim Balant who drew a buxom naked woman [as Catwoman], which to a 13 year old boy can be very appealing.

Whatever you are at 12 is who you will be for the rest of your life. When I was 12, Batman Returns came out. I remember Michelle Pfeiffer. There’s one line I keep coming back to in my head that, to me, defines all of Batman and Catwoman. They’re dancing and they figure out they’re enemies. She asks him, “Do we have to fight now?” That’s their relationship in one line. I’m in love with you, we have to fight, but can we finish this dance? I remember being moved.

Does your definition of love change with different characters? Or do all your characters — Batman, Vision, Mister Miracle — share the same understanding of love?

It changes from book to book. Mister Miracle was an idealized marriage going through a lot of trauma, testing it, growing stronger. Strange Adventures is not a healthy marriage, there’s something at the core that’s rotten.

What do you think fuels your interest in love as a constant theme?

I can’t explain why I keep coming back [to love]. I guess you cannibalize life. The most important thing in my life is my relationship with my wife and children, so that becomes the heart of whatever series I’m on.

Comic writers aren't like writers in other mediums. I try to explain this when I'm in a Hollywood meeting. They’re talking about making four movies over the next ten years. I'm like, comic writers have to write a short story every week! If you're a TV writer, you work two years to get ten episodes out. If a comics writer took two years and got ten comics out, you wouldn't feed their family. So, you cannibalize. I heard Jason Aaron say this probably ten years ago. In an interview he's like, “You look around and that becomes a story.”

What does Batman share with the Vision? His marriage to Wanda is streaming in front of a TV audience these days.

It's funny, because they’re similar characters. They’re both a little robotic. They examine situations rather than react to them. But they approach love differently. Vision is pursuing love. Vision’s great idea is to become normal. He feels that part of being normal is that Donna Reed perfection, to find someone and create this simulacrum of life.

Batman’s the opposite. He sees no use for love. That gets in the way of his vow. When Batman falls for Catwoman, he does it reluctantly. Every instinct tells him to run. So I think they’re different. They’re similar in their analytical approach but different in their goals.

What’s the secret to a fulfilling marriage, Tom King?

I don’t know. Marry a midwesterner? I married a girl from Illinois, highly recommended. She’s a getter. She puts her head down, finds a solution, gets to the end of the day. I’m from L.A. We’re an anxiety-ridden, fame-obsessed people. Maybe we’re like Batman and Catwoman. I bring the anxiety, my wife brings calm and practicality.