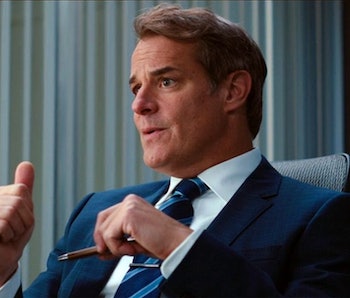 What’s the deal with S.W.O.R.D.? Founded by Captain Marvel’s Maria Rambeau, S.W.O.R.D. (short for “Sentient Weapon Observation and Response Division”) is making its Marvel Cinematic Universe debut in WandaVision, but this S.H.I.E.L.D. replacement is already raising some red flags.

Led by acting director Tyler Hayward, the organization is heading the investigation into the “Westview Anomaly” in WandaVision and has been attempting to infiltrate the town and communicate with Wanda Maximoff. But despite the organization's large presence in the series, it’s still not clear if S.W.O.R.D.’s intentions are pure… or nefarious — especially after Episode 5.

WandaVision Episode 5 provides a lot of new information about not only Wanda’s control over the citizens of Westview but also about her pre-existing connection to S.W.O.R.D. Namely, it’s revealed that S.W.O.R.D. was in control of Vision’s dead body after he was killed in Avengers: Infinity War and that Wanda broke into a secret lab and stole his body just nine days before the events of Episode 5. (This also helps clear up the timeline of WandaVision relative to the events of Avengers: Endgame.)

Josh Stamberg’s Hayward claims that S.W.O.R.D. was keeping Vision’s body to make sure it was never turned into a weapon (as Vision apparently requested while he was still alive) and that Wanda, in her grief, took his body anyway. But there are a few reasons to suspect that not everything the acting director says is true.

When Hayward reveals that Wanda broke into S.W.O.R.D.’s headquarters, there's something off about the security footage he shows of the break-in. The footage itself is brief and choppy, but we do see Wanda walking into the room where Vision’s body is being held — and it doesn't look like it did at the end of Infinity War. Instead, the footage appears to show Vision’s body separated into multiple parts on different lab tables as if it was being dissected and experimented on — not just preserved and held for safekeeping.

If that’s the case and S.W.O.R.D. really was tampering with Vision’s body, it would explain why Wanda would break in and take it. It would also explain why Hayward spends so much of WandaVision Episode 5 not only trying to label Wanda a dangerous terrorist but also trying to incapacitate her with a drone attack. It's likely that all his actions in the episode are part of an attempt to discredit or take out Wanda before she has the chance to reveal anything about S.W.O.R.D. that could ruin the organization’s reputation.

Notably, when Wanda steps out of the Westview limits to confront Monica and the S.W.O.R.D. agents, there are even hints that she already knows who Hayward is. Not only does she call him “Director” without him having introduced himself, but she also turns away from Monica and looks directly at him when she warns that “no one” will ever take what she wants from her again. The implication appears to be that Wanda and Hayward know each other — and that Wanda isn't fond of him.

The Inverse Analysis — Week in and week out, WandaVision continues to find new ways to surprise us, which makes predicting its twists and turns difficult. However, Episode 5 provides enough reasons to be suspicious of not just Hayward, but S.W.O.R.D. as a whole moving forward. If the organization was experimenting on Vision’s body for its own benefit, then it means they have ulterior motives for seeking out Wanda and Vision beyond just to investigate what's going on in Westview.

What are those reasons? We’ll have to wait to find out, but it’s hard to think of any that would justify S.W.O.R.D. experimenting on the corpse of a dead superhero. It all just seems a little too shady to shrug off right now, and this wouldn’t be the first time Marvel has included a corrupt government organization in the MCU either.