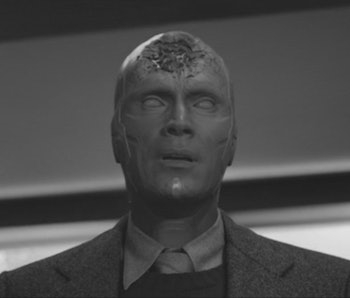 In the Marvel Cinematic Universe, Vision died at the hands of Thanos. In Westview, however, he's very real. In WandaVision Episode 5, just how this is possible is revealed. It may look strange, but Vision's unusual appearance is straight from the comics — and may reveal what's next for New Jersey's strangest couple. Warning! Spoilers ahead for WandaVision Episode 5.

In Episode 5, acting S.W.O.R.D. director Tyler Hayward shows Monica, Jimmy, and Darcy top-secret footage from S.W.O.R.D. headquarters. The footage shows Wanda, dressed in her typical red coat getup, as she blasts her way into the lab where Vision's corpse is kept.

This "corpse" wasn't kept intact, though. Years after the death of Vision in Infinity War, his body is dissected and laid out across a number of examination tables. What good is Vision's dead body to S.W.O.R.D. unless it contained some kind of life in one way or another? Could this body be held stable while being researched, allowing Wanda to manipulate it in her giant sitcom fantasy? As usual, the comics may have an answer?

This disassembled Vision is actually ripped straight from the comics. In West Coast Avengers Vol. 2 #43, Vision is kidnapped and brought to a Vigilance base, where he is taken apart and put on a table in nearly exactly the same layout. However, that situation was different. While he was disassembled, he was very much still alive.

Alive enough, in fact, to piece himself together and fight the very Avengers who were trying to save him. Vigilance wiped his memory, so he fought against Janet Van Dyne, Hawkeye, and Wonder Man. Only one of Vigilance's neutralizers (previously used to capture Vision) worked to subdue him.

The other big difference between the two situations is purely practical — Vision doesn't have the Mind Stone anymore, and it's hard to have Vision without that stone — despite Shuri's best efforts in Infinity War. Even if by some miracle Wanda was able to bring him back outside the Hex, if the story follows the comic, he wouldn't be able to remember her, or their two twin boys.

Episode 5 of WandaVision was all about grief. We can't bring back the dead, even if we warp reality using corpses or do a last-minute recast of a "long lost bro." Just as Billy and Tommy needed to let go of Sparky and move on, Wanda needs to realize Vision isn't Vision anymore, he's just some parts on a table. While her powers may be able to bring him back, it's just a temporary fix for the grief she will eventually need to face.