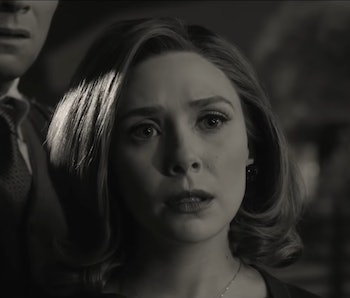 It's time for Marvel to unsheathe the S.W.O.R.D. In the new Disney+ series WandaVision, in which Elizabeth Olsen and Paul Bettany return as their Avengers heroes Wanda and Vision respectively, a new organization akin to S.H.I.E.L.D. emerges from the shadows.

But what is S.W.O.R.D.? What purpose do they serve in the Marvel Cinematic Universe? And perhaps most importantly, how do they know about Wanda and Vision's sitcom reality?

With only the first two episodes of WandaVision streaming now on Disney+, we admit we don't have all the answers. But based on what we already know about S.W.O.R.D. from the comics, we can confidently take some big speculative swings and guess where WandaVision is going next.

Warning: Spoilers for WandaVision Episodes 1 and 2 ahead.

In the closing minutes of WandaVision Episode 1, we learn Wanda (Olsen) and Vision (Bettany) are living some kind of false, sitcom-style reality that is being monitored by a third, unknown party. We never see this individual's face and know nothing about them, except they have pale skin. (Whoever they are, they really need to get out and get some sun.)

We don't know the full context of the scene. We see the false WandaVision sitcom is being watched on a vintage CRT television beside modern computer monitors and switchboards. We can also see the symbol of a medieval sword drawn with a quarter circle on both the monitor and on the notebook of the anonymous viewer.

In Episode 2, S.W.O.R.D. again shows up via a beekeeper whose outfit bears the same insignia.

We'll admit it, we know jack squat about what's going on. But we do have one glaring clue, and it's what that sword symbol stands for: The symbol belongs to S.W.O.R.D.

S.W.O.R.D. is a counterterrorism and intelligence agency with the goal of protecting Earth from alien threats. Its acronym stands for Sentient Weapon Observation and Response Division.

Like most things in the MCU, the organization first appeared in comics. It debuted in the comic book series Astonishing X-Men in 2004, and stood for "Sentient World Observation and Response Division." It is unknown if the difference between "Weapon" and "World" means anything.

S.W.O.R.D. is making its live-action MCU debut in WandaVision, with an adult Monica Rambeau (Teyonah Parris) acting as the show's main connection to the organization. (Leaked set photos also confirm Monica will be in contact with FBI agent Jimmy Woo, played by Randall Park in the 2018 movie Ant-Man and the Wasp.)

The fact S.W.O.R.D. originates from Astonishing X-Men reinforces fan theories that WandaVision may set the stage for the X-Men in the MCU. That's probably a negative, but hey, maybe!

Right now we can't say for sure why S.W.O.R.D. is involved with WandaVision, which thus far hasn't hinted it is taking place in space with aliens. Unless maybe it is...

There's a lot of unanswered questions regarding S.W.O.R.D. Who runs it? Where is it? Does it know things? (Let's find out.) For now, we can only guess who is at the top of the command chain, and we can only theorize why the group was established in the first place.

Here's my working theory (which I can support with evidence): S.W.O.R.D. is Nick Fury's new organization to replace the defunct S.H.I.E.L.D.

S.H.I.E.L.D., previously led by Nick Fury in movies like Thor (2011), The Avengers (2012), and Captain America: The Winter Soldier (2014), was established to defend Earth from threats on Earth. That means killer robots, Nazi soldiers, augmented beings, and demons. But with the arrival of aliens on Earth, Nick Fury believed another group was needed. As Fury told the Avengers, "We learned that not only are we not alone, but we are hopelessly — hilariously — outgunned."

It so happens S.H.I.E.L.D. was disgraced and disbanded shortly after The Avengers, when it was revealed to be under the control of S.H.I.E.L.D.'s oldest enemies at Hydra. (Black Widow revealed everything to the public at the end of The Winter Soldier.) In the years since, Nick Fury has been secretly creating S.W.O.R.D. In the post-credits scene of 2019's Spider-Man: Far From Home, Fury is seen hard at work (or hardly working) establishing a huge outer space base of operations staffed by Kree aliens. We don't know what it is Fury is running, but it might be S.W.O.R.D.

We can't stress enough that that's just a big guess and we don't actually know it for sure. Due to the opaque nature of WandaVision, the show invites speculation, but no one should be betting money on these theories.

One more thing — There might actually be an important distinction between "Weapon" and "World." In 2019's Captain Marvel, a defeated Ronan the Accuser (Lee Pace) threatened to "be back for the weapon," which he meant to be Captain Marvel. And who is Captain Marvel's BFF? Nick Fury.

If Fury is behind S.W.O.R.D., is Fury preparing for Ronan's forces? (Ronan was killed in 2014's Guardians of the Galaxy, but the galaxy isn't short on Kree extremists.) Of course, Fury wasn't in the room when Ronan spoke, but it is a curious connection that may or may not have any merit...