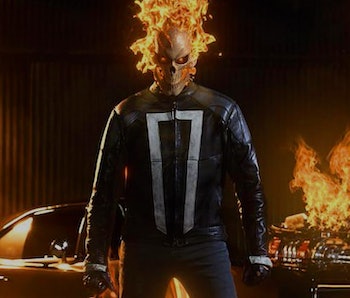 Ghost Rider took center stage on the Season 4 premiere of Marvel’s Agents of S.H.I.E.L.D. Tuesday with a fiery, skeletal face. What’s less clear is the extent of his powers. Will they be what we’ve seen in the comics or will the TV Ghost Rider get some TV-only powers?

Ghost Rider’s powers are steeped in the occult, which sometimes makes his abilities a little hard to understand from appearances alone. We saw Ghost Rider gett hit by an RPG missile but absorb the fires from the explosion for his own use. However, Ghost Rider doesn’t necessarily need external sources of fire to use flames as he can generate his own special hellfire through his demonic powers. This was evidenced briefly in his climactic fight against Daisy when he would enflame everything he touched.

However, the biggest question mark regarding Ghost Rider’s powers is how he executes the people he finds guilty, as witnessed by the bad guy thug whose internal wounds refused to heal. After getting a visit from Daisy in the hospital, the nameless thug’s wounds began to open again causing him to bleed out. His last words revealed that when Ghost Rider burns your soul, your soul stays burned.

While it’s unclear exactly what it means for this version of Ghost Rider to “burn” someone’s soul, this could be an extension of his “judgment stare.” In the comics, Ghost Rider can pass judgment on someone’s soul, and if that person is found guilty, then their soul becomes inflamed with all the pain that person has caused others in their life. A variation of this power was seen when Nicolas Cage played the character in the 2007 Ghost Rider movie.

The way this power was presented in S.H.I.E.L.D. differs from both the Cage film and the comics, and didn’t necessarily explain if this was a result of Ghost Rider passing judgement on his soul or some kind of new power. Either way, it’s hinted that Ghost Rider can still determine someone’s guilt by staring into their eyes like he did with Daisy at the end of the episode.