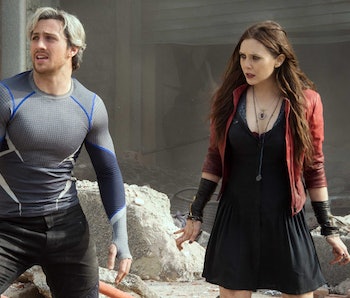 WandaVision could open the door to the multiverse. The series’ trailer indicated that Scarlet Witch is living inside an alternate reality bubble where Vision is still alive, but that might just be the tip of the Marvel multiverse. An exciting new leak signals the return of another familiar superhero, one that could finally bring the X-Men into the Marvel Cinematic Universe in an unexpected way.

Speculative spoilers ahead for WandaVision.

Avengers: Age of Ultron featured Wanda Maximoff and her brother Pietro (aka, Quicksilver), both of whom were on Ultron’s side for a while before turning against the supervillain AI. While Wanda survived and went on to aid the Avengers in their fight against Thanos, Pietro’s MCU appearance rather short-lived after he died taking a bullet for Hawkeye in the film’s climactic battle.

Meanwhile, Evan Peters’ version of Quicksilver was introduced in 2014’s X-Men: Days of Future Past when he is recruited by Magneto, Wolverine, and Professor Xavier to break into the Pentagon. This makes Quicksilver the only Marvel character to appear in both the MCU and the separate (and now defunct) X-Men movie universe.

The two Pietros have the same powers. However, the X-Men films stayed true to the character’s backstory by explaining his abilities are the result of a genetic mutation, while the MCU’s Quicksilver and Scarlet Witch received his powers by way of HYDRA experimentation.

So we have one Quicksilver who's not a mutant and who's also dead (although since when has that stopped any superhero from showing up again?), and we have another Quicksilver who's alive, a mutant, and doesn't belong in the MCU. That seemed to be the end of the story — until recently.

A leak from the reputable toy tipster Serlent Pops suggests an exclusive Funko Pop pack will feature both Vision and Quicksilver. The image used in the tweet is of Aaron Taylor-Johnson’s version of the character from Age of Ultron (and not Evan Peters), suggesting Wanda could bring her brother back to life.

That would make a lot of sense considering that WandaVision seems intent on giving Wanda Maximoff the perfect life she never really got. Granted, the Funko pack is not confirmed, but the leaker has been right about such leaks before, so it’s within the realm of possibility that some iteration of Quicksilver will be included in the series. But which Quicksilver will it be?

A leaked casting report suggested that Peters would be playing a key role in WandaVision and that he filmed his scenes in late 2019. His potential involvement left fans speculating about who he might be playing and whether or not he would reprise his role as Pietro/Quicksilver on the Disney+ series. The casting leak also implied that Peters’ role could be a villain and not Quicksilver, but it’s not a longshot to think that he could be the MCU’s very own speedster.

Aaron Taylor-Johnson has also made it clear he has no plans to return to the role of Quicksilver. Of course, he could be lying, but there were no reports that he was ever seen on the set of WandaVision. So if anyone is playing Pietro on the Disney+ show, it's probably Evan Peters, and that could open the floodgates to any number of other X-Men movie characters making the jump into the MCU.