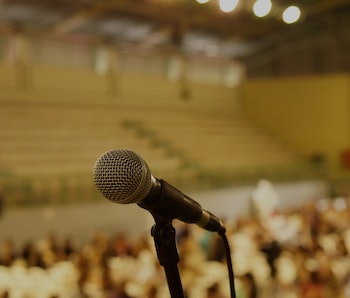 You don’t have to be a true introvert to hate public speaking, but people who already struggle onstage know how stressful it is to lose your voice during the moment of truth. A new line of research shows that the stress of speaking can disrupt crucial circuits in the brain, making it physically harder to speak up. And introverts seem to have it worse than extroverts do.

Several estimates show that 75 percent of people struggle to speak in front of audiences, at least to some degree. A paper published in May in the journal Brain Imaging and Behavior outlines the biological basis for why some of these people may struggle to even make a sound in front of a crowd. In this pilot study, scientists showed that stress impacts the way the brain communicates with the muscles in the throat.

Maria Dietrich, Ph.D., the paper’s first author and the director of the University of Missouri’s Vocal Control and Vocal Well-Being Lab, tells Inverse that this study systematically explores the roots of vocal behavior changes during times of stress.

“We know that a limbic vocalization pathway exists, for example, for laughing and crying,” she says. “But data have been missing to show that limbic-motor interactions may also impact voice production during speech.”

Dietrich’s team attempted to fill in this gap.

Their findings focus on several areas of the brain that work together to control the laryngeal muscles, the muscles in the throat that help produce complex sounds. One of the major areas responsible for that coordination is the laryngeal motor cortex, but speech is also influenced by combinations of other “secondary” brain areas, including the cingulate cortex.

Stress, their results suggest, decreases activity in these regions, and by extension, the muscles they control. This creates that “frog in your throat” feeling.

To show how this happens, Dietrich and her team told 13 women that they had to deliver an impromptu five-minute speech about who would be the best candidate for a job at a law firm. Then, they were told to prepare for the speech, which could begin at any moment. Then the team took fMRI images of their brains and took saliva samples to measure levels of stress hormones.

"Anticipating stress and planning ahead how to deal with it can be helpful."

While the women prepared for the speeches, Dietrich and her team observed that their levels of cortisol, a stress hormone, spiked. But alongside those spikes, they saw deactivations in those secondary areas of the brain that influence vocal control — for example, the anterior and middle cingulate cortex. That pattern held across the board, but in people who specifically qualified as introverts, things got a lot worse.

Their analysis revealed ties between people who classified as introverts, high levels of “cortisol reactivity,” and an additional decrease in activity in one area of the laryngeal motor cortex — a primary area of the brain that controls vocalization. In essence, people who are more sensitive to stress and who qualify as introverts may have additional brain regions impacted by the stress of a speech.

Dietrich explains that pervious studies have also demonstrated that some people qualify as “laryngeal stress responders,” because they tend to have more profound changes to their vocal muscles when they’re put on the spot and asked to speak. These results suggest that being more introverted may predispose someone toward one of these “stress reactions” that makes speaking so hard — perhaps, in part due to this newly identified activity in the brain.

Fortunately for “stress responders,” there are plenty of ways to improve public speaking technique. But Dietrich adds that there are ways to at least manage the stress of the day before it even arrives, doing both your brain and your voice a solid.

“Anticipating stress and planning ahead how to deal with it can be helpful,” she says. “That helps to prevent an overwhelming feeling, quickly reduces stress, and helps build confidence.”

Abstract: Knowledge on brain networks subserving vocalization in vocally healthy individuals under various task conditions is scarce but paramount to understand voice disorders. The aims of our study were to determine (1) the effect of social-evaluative stress on the central neural control of phonation underlying speech production; and (2) the neural signature, personality profile, and aerodynamic vocal function in relation to salivary cortisol responses. Thirteen vocally healthy females underwent an event-related sparse-sampling fMRI protocol consisting of voiced and whispered sentence productions with and without exposure to the social-evaluative stressor public speaking anticipation. Participants completed a personality questionnaire, rating scales of negative emotional state, and provided salivary cortisol samples. In the total sample, the task contrast of voiced productions revealed that stressor exposure resulted in a peak activation in the right caudate with concomitant deactivations in the bilateral pgACC and aMCC, and right IFG, BA 9, BA 10, insula, putamen, and thalamus. There were individual differences in stressor-induced brain activations as a function of stress reactivity with greater cortisol reactivity linked with lower laryngeal motor cortex activity and lower scores on aspects of extraversion. Our data confirm that stress alters the phonatory control for speech production through limbic-motor interactions. The findings support the Trait Theory of Voice Disorders (Roy and Bless 2000) and help provide critical insights to the study of voice disorders such as primary muscle tension dysphonia.

More like this
Mind and Body
Jan. 21, 2023
Procrastination study suggests a link to shoulder pain, bad sleep, and more
By Eva Skillgate, Alexander Rozental, Fred Johansson and The Conversation
Mind and Body
Jan. 22, 2023
Cyclic breathing: Why experts say just 5 minutes a day can reduce stress
By Sarah Sloat
Mind and Body
Jan. 31, 2023
Is the Bivalent Covid-19 Booster Still Worth It? Here's What the Latest CDC Data Shows
By Katie MacBride
LEARN SOMETHING NEW EVERY DAY.
Related Tags
Share: