A new study has unlocked a secret of Stonehenge

What puzzles of the past lurk here? 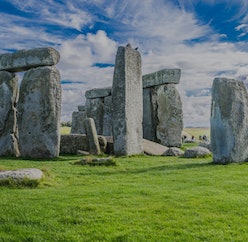 The last day in August has arrived. I hope your summer has gone well and this daily newsletter has served to expand your world (or help you escape it for a while), with the latest news on science and technology from the editorial staff at Inverse.

Today’s lead story is all about a location that’s long been a mystery for travelers and historians. It’s the latest entry in a new series called Worldview, aimed at travelers who want to learn ancient peoples of the new places they visit.

I’m Nick Lucchesi, and this is Inverse Daily. Tell a friend to subscribe using this link.

This is an adapted version of the Inverse Daily newsletter for Tuesday, August 31, 2021. Subscribe for free and earn rewards for reading every day in your inbox. ✉️

Something unexpected at Stonehenge — For centuries still, the rocks have held onto these secrets — but now a pioneering study reveals the answer to at least one of these mysteries, Doris Élin Urrutia writes:

What secrets of the past lurk in the great stone monoliths of Stonehenge?

For centuries, scientists, archaeologists, and even occultists have wondered about the answer.

And for centuries still, the rocks have held onto these secrets — but now a pioneering study reveals the answer to at least one of these mysteries: How Stonehenge has managed to stand the test of time.

Long enough, in fact, that curious pilgrims who travel to the area around Salisbury — the nearest town, nestled in the heart of England’s Wiltshire region, to the monoliths — can still see the ancient testament to a thriving, ancient British culture today. The key to this enigma, it seems, is truly hidden inside the rocks themselves.

The trial of Theranos founder Elizabeth Holmes — Staff writer Katie MacBride reports on the latest in the saga of Theranos:

Jury selection in one of Silicon Valley’s biggest trials in decades begins Tuesday, the case against Elizabeth Holmes, the founder of Theranos.

Holmes expected the blood-testing startup to revolutionize the biotech industry with a simple (and, it should be said here, easily contaminated) finger stick test that could offer rapid results on all manner of viruses and other health issues that could be exposed via a blood sample.

None Holmes’ grand plans for Theranos — a riff on the words “therapy” and “diagnosis” — came to fruition.

In the years since, Theranos became the medical world’s most infamous startup for its toxic mix of venture capital-backed hubris, consumer deception, and transgressive, clumsy strides into the world of personal health.

Are brown eggs healthier? — You may have always heard that brown eggs are healthier than white, but egg scientists disagree and say these eggs have essentially the same nutritional value. Sarah Wells reports out the question in the latest edition of the Check, Please! series:

Your first decision: brown or white? You run through the numbers. Compared to stark bleach-white eggs, brown eggs are just healthier — right?

Not exactly. There’s a pervasive misconception across the egg-buying public that brown eggs are better nutritionally. In a 2011 study examining how brown eggs entered the traditionally white-egg American market, the authors found it came down to marketers attempting to create a space for “specialty eggs.”

The best type of friend for your brain — Elana Spivack reports on a study that shows that having a strong network of good listeners helps prevent conditions like Alzheimer's disease and dementia by reinforcing cognitive resilience.

That’s it for this Tuesday edition of Inverse Daily.