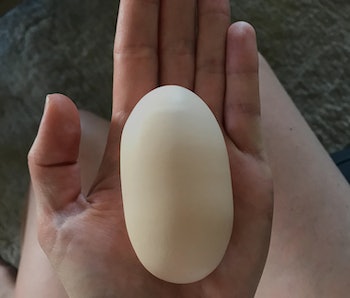 Nature is miraculous: Trees turn sunlight into air, cows turn grass into milk, and chickens turn meal into eggs. Sometimes, those eggs are long, as a recent viral post to Reddit’s r/WTF revealed.

“So, my chicken just laid this monstrosity…” redditor E_graaa wrote beneath the photo of the seriously long egg.

As of this article’s publication, the post had received over 30,000 upvotes, with many of the 1,400 comments either inquiring about how the chicken is faring after laying the egg or speculating on what kind of dinosaur the egg really came from. Yes, Ellie McGrath, the person behind the account, tells Inverse, the egg really did come from a chicken, and yes, the chicken is doing fine.

McGrath was, however, a bit worried when she first heard the bird laying. Chickens normally cluck aggressively when they lay eggs, but this was different, she says.

“I actually thought she was being attacked,” said McGrath, of her 1-year-old Australorp x Rhode Island Red cross named Belinda. “And she didn’t stop squawking and flapping her wings for a good few minutes. I didn’t know what the hell was going on… until I saw The Egg.”

Eggs Are Not Always Egg-Shaped

As bizarre as it looks, this long egg is actually not all that abnormal. You’ve probably never seen an egg like this at the grocery store, but if you peruse any chicken-keeping blog or message board, you’ll find all sorts of stories of eggs with bumps, monstrous eggs without shells, and eggs that are actually just balls of infections. But once you know how an egg is made inside a chicken, a lot of these abnormalities make more sense.

Female chickens usually have an ovary full of follicles, which are essentially pre-egg cells. These follicles take about 10 days to grow into yolks, and at any given time, a chicken will have a handful of follicles at various stages of development. About 24 hours before a chicken is ready to lay an egg, a mature yolk moves into the oviduct, where it can be fertilized by a rooster. Whether the yolk gets fertilized or not, it’s then joined by the white, and the whole package gets encased in two membranes. Then it moves into the shell gland, where it’s encased in a hard calcium shell, and then, well, you know the rest of the story.

At any point during this complicated biological journey, things can go wrong. For instance, if an egg remains in the shell gland for too long, it can end up with hard calcium bumps on it, making it look like it has acne. This egg is still safe to eat, it just looks funky. But once the chicken depletes its calcium on that egg, she might not have enough for the next egg. In some cases, that next egg can come out with no shell at all:

In some cases, an infection in the oviduct can yield something called a “lash egg,” which isn’t actually an egg. It’s an egg-shaped lump of egg material and pus, and it means your chicken is sick. But that’s kind of a worst case scenario abnormal egg. Most of the time, they’re not so gross.

There are a few ways in which a long egg can develop. The most common cause is that the hen’s oviduct carries two yolks at once. When this happens, the white and shell simply form around the two yolks and make an oblong egg. But in Belinda’s case, the egg only contained a single large yolk, says McGrath; it’s possible that Belinda’s yolks were just so big that a longer shell was necessary to contain them.

“It was mostly yolk. Maybe ping pong ball-sized?” she estimated.

These types of egg oddities can be flukes, but if they happen over and over, they can tell you something about a chicken’s anatomy, or they can even indicate that something’s wrong. In Belinda’s case, another egg came less than a week later.

“Ummm… you’re not going to believe this, but Belinda has laid another monster of an egg,” McGrath told Inverse on October 13. “Possibly bigger than the first! Talk about timing!”

It’s hard to tell whether Belinda’s frequent long eggs mean there’s something wrong with her, as chicken forums are full of stories of chickens that lay long eggs for their whole lives. In fact, many Rhode Island Red owners seem to have this happen, so it’s possible that long eggs are simply in Belinda’s family tree.

Whatever the case may be, McGrath says Belinda seems happy and healthy, so here’s to many years of long eggs. And let’s hope laying them get less painful.