The ancient people who built Stonehenge “wanted it to last a long while.” 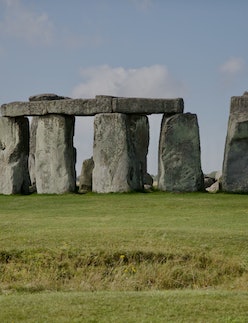 What secrets of the past lurk in the great stone monoliths of Stonehenge?

For centuries, scientists, archaeologists, and even occultists have wondered about the answer.

And for centuries still, the rocks have held onto these secrets — but now a pioneering study reveals the answer to at least one of these mysteries: How Stonehenge has managed to stand the test of time.

Long enough, in fact, that curious pilgrims who travel to the area around Salisbury — the nearest town, nestled in the heart of England’s Wiltshire region, to the monoliths — can still see the ancient testament to a thriving, ancient British culture today. The key to this enigma, it seems, is truly hidden inside the rocks themselves.

What was discovered at Stonehenge — Today, Stonehenge’s rocks are not accessible for human hands to touch due to preservation concerns, but in a one-off scientists got to sample the inside of one of the giant slabs. They found that when people built Stonehenge more than 4,000 years ago, their rock choice was serendipitously (or purposefully) perfect for making the monument last a long, long time.

Stonehenge’s large rocks, David Nash tells Inverse, were formed “by at least 16 different growth layers.” Nash is a geomorphologist and the lead author of the new study, which was recently published in the journal PLOS ONE.

“They knew certainly they were picking stones that weren’t going to crack.”

“What that means in essence is that it is incredibly strong. If they were choosing a stone to build Stonehenge from and wanted it to last — you’d pick that rock.”

Stonehenge is made up of two distinct rocks. Within the circle, there are bluestones — researchers have long agreed that the ancient artisans who built Stonehenge probably quarried them in nearby Wales.

But the more celebrated, larger Stonehenge rocks have more mysterious origins. Stonehenge is has several arches called trilithons, and the slabs that form these iconic shapes are known as sarsen stones; outside of the U.K., this material is called silcrete. Stonehenge’s specific silcrete alchemy shows that it may still stand the test of time to come.

In his new work, Nash and the team studied a piece of the stones’ insides and discovered that the sarsen stones are made of the incredibly strong rock. Stonehenge’s builders likely knew the stones were reliable and sturdy, but they hit the geological jackpot.

“They knew certainly they were picking stones that weren’t going to crack,” Nash says. “But I don’t know that they knew [the rocks] were necessarily that strong internally.”

How they did it — Nash says this study happened due to “pure chance.”

The story of the sample starts in the 1950s when a mysterious hole in the ground weakened the soil near one of Stonehenge’s trilithons, toppling a sarsen stone. In 1958, Britain’s Ministry of Works noticed that the slab cracked and had three rods driven into the slab to keep the two halves together. To insert the rods, three cores were extracted from the stone. One of these cores was gifted to an employee, Robert Phillips; he kept it for more than 40 years until it was given to English Heritage in 2018.

They then gave Nash’s team the green light to study a 7 centimeter-long, 2.5-centimeter wide sliver of the 1.1 meter-long core.

“We analyzed this small piece of stone to death,” Nash says. After preparing 30-micron-thin subsamples to fit on a microscopic slide, they got humanity’s first-ever glimpse inside Stonehenge’s sarsen stones.

How to travel to this historic location — The best way to see Stonehenge is to go to the place itself.

If you are traveling from outside the U.K, the best route is to fly to London’s Heathrow Airport, and once in London, take a train from Waterloo Station to Salisbury. The train journey takes a little over one hour — so it is a short trip. There is also a shuttle bus from London’s Victoria Coach Station.

Once you are in Salisbury, there is a mere nine miles separating you from Stonehenge itself.

Getting there — If you arrive in Salisbury, you will need to either rent a car or take a taxi or Uber to Stonehenge. The ride is only 20 minutes, and the Salisbury Plain will make for a pleasant drive. Alternatively, you can also save on the greenhouse gases and cycle to the site, which takes most people an hour.

And you need not go directly — it is worth taking the time to spend a day traveling up from London to the site as you pass through other infamous places nearby, including Shakespeare’s birthplace in Stratford-Upon-Avon, the Roman ruins at Bath, and Oxford University.

“Stonehenge is a good midway point,” Nash adds for anyone traveling from London to Wales since its location in Salisbury plain is roughly half the distance between the city and the country.

Special Stonehenge Stone Circle Experience tours by English Heritage are also available — but no touching! The monument staff asks that people wear face coverings while onsite or indoors, too.

Best time to visit Stonehenge — Stonehenge is open year-round to visitors, and tickets are available for purchase through the English Heritage website.

The best time to visit the south of England is during the summer, as there is less chance of rain washing out the day. But the stones at the site are just as mystical and beautiful in the winter sunlight as they are in the summer heat.

How long to stay at Stonehenge — English Heritage suggests that the entire site can be experienced in a mere two hours. But they also lay out specific itineraries for people with more time to spare for this mystical site and the surrounding Wiltshire countryside where the ancient builders once lived. Travelers can spend two hours, or half a day, or a full day — and all of them will be left in wonder.

The sarsen core Nash examined may one day be on display at the Stonehenge visitor center, he says. When that happens, eagle-eyed visitors will be able to spot the remnants of dead lichen, a composite moss-like organism, on each end of the core where the rock was once exposed to natural elements.

But as for the sarsen stones that still stand at Stonehenge, there is no touching we are afraid.

Why lovers of history and science should visit Stonehenge — Tools found at many incredibly ancient archaeological sites around the world are made of silcrete. Ancient people from Australia to South Africa have widely recognized that this material is tough — perfect for tools — for at least the last 200,000 to 300,000 years, Nash says. As ancient Homo sapiens spread and proliferated across the world to create the modern societies we have today, they have repeatedly turned to hardy stone to make hand axes and spears. Silcrete can form sharp, durable edges when broken off larger pieces, making it a reliably durable rock for fashioning vital hunting and building equipment.

When Stonehenge was crafted, around 2,585 to 2,400 B.C.E, the builders likely already knew that the rock was a good choice for putting together a monument meant to last forever. They cared about the stone so much that they seemingly hauled about six dozen 30-ton rocks for more than 15 miles from a sarsen-plentiful place called Marlborough Downs to the site near Salisbury.

Stonehenge was likely crafted with sarsen stones not only because they are so durable, but also because the site is built on not-so-great construction material. The iconic English landscapes like the cliffs at Dover and the giant figures carved into the Dorset hillsides are made of chalk.

Salisbury Plain is underlain by chalk, Nash says, and the abundance of this weak material likely motivated the ancient people there to search far and wide for hefty boulders that could build this testament to their astronomical and religious practices.

The chalk is more than 66 million years old, but the grains in Stonehenge’s sarsen stones far outdate the chalk. Nash’s team found that some of the core’s sand-sized grains are about 1.5 billion years old.

Stonehenge’s builders likely tested the boulders they found in Marlborough Downs, and perhaps, as they chipped at the slabs they noticed that underneath the skin of the rock they revealed that the sarsen is almost white.

It is marvelous to imagine now, but Stonehenge would have been a beautiful creamy-colored monument when it was built. A laser survey performed within the last decade found evidence of dressing marks and techniques with sarsen hammerstones that the builders performed to shave off the stones’ dull exteriors and expose their milky innards.

English Heritage no longer allows people to get so close as Nash once did. He used to picnic with his mother there, sitting among the rocks.

Now, he offers a different piece of advice for those who want to go looking for their own hunks of Stonehenge-esque rock to marvel at up-close: Pretend you are looking for something sweet.

“You see like little sugar grains but they are all stuck together,” Nash says. Through all the mystique, it turns out that the sarsen looks like a sugar cube.