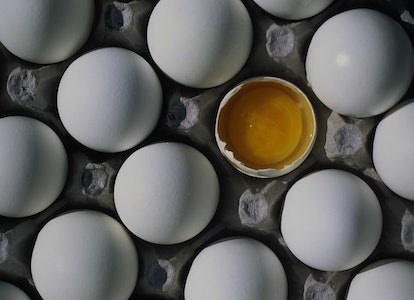 Your first decision: brown or white? You run through the numbers. Compared to stark bleach-white eggs, brown eggs are just healthier — right?

Not exactly. There’s a pervasive misconception across the egg-buying public that brown eggs are better nutritionally. In a 2011 study examining how brown eggs entered the traditionally white-egg American market, the authors found it came down to marketers attempting to create a space for “specialty eggs.”

“Brown eggs seemingly make good candidates for specialty eggs because respondents polled believed that brown eggs were healthier than white, a belief disputed by the academic community,” the scientists write.

Ken Anderson, professor of commercial layer and small flock management at North Carolina State University, is part of that community. He tells Inverse there’s little science to support that claim.

“A generic brown egg and a generic white egg are the same nutritionally,” Anderson says.

The science of egg color

First things first, how do we get colored eggs? It comes down predominately to breed, Anderson explains, and not what the hens eat.

As for the pigment, white is essentially a blank slate (i.e. there’s no pigment added) while brown eggs receive their color through a pigmented surface level secretion the hens “apply” before laying. Kind of like hanging up brown curtains all over an otherwise white room days before guests arrive.

Pastel-colored eggs that might be light blue or green are a different story though, Anderson says.

Not only are these eggs laid by different hens (e.g. Araucana, Ameraucana, or Dongxiang), but the way the pigment is applied is different too, Anderson explains. Instead of a surface level of color, this pigment is worked into the calcium of the eggshell itself. Compared to brown eggs, this might look like painting your walls pastel green the moment you move in.

Origin of the white versus brown egg myth

Unlike carrot supersight or growth stunting coffee, which both had strong misinformation campaigns fueling their myths, the origin of this egg myth is a bit murkier. The beginning of large-scale commercial egg farms may be a place to start though, Anderson says.

“From a historical perspective, [white egg-laying birds] were predominately a smaller framed bird,” Anderson says. “So they were easier to work with and handle in a large-scale setting.”

Contrastingly, hens that lay brown eggs, such as White Plymouth Rocks, are generally larger and more difficult to incorporate into existing commercial laying infrastructure. This may explain why smaller family farms in New England — where land is more limited for commercial farming — may favor these birds.

This is also why you’re more likely to see brown eggs labeled as organic or free-range, says Anderson, because these birds are less suited for the alternative — cramped commercial farms.

Anderson also agrees with the perspective of registered dietician Rachel Fine, who told Yahoo News in 2019 that there may also be an element of health-washing driving this misconception. Consumers might opt to choose brown eggs because brown food in general — whether it lacks artificial dyes or contains a few more nutrients, like wheat pasta — is seen as a healthier alternative.

Regardless, the debate isn’t a new one — or even the same, depending on what country you’re in. Preference for certain eggs is also cultural. For example, in Japan uniform dark brown eggs are the favorite, while in Europe, light brown is seen as the best option.

Delightfully, in a 1971 New York Times article, New Englander E.B. White critiques a different New York Times article about eggs, that one by Englishman J.B. Priestly. White responds to Priestly’s assertion that: “The English prefer the brown egg because it belongs to the enduring dream of the English — who always hope sooner or later to move into the country.”

But it’s not an American preference for the “unnatural” that causes them to eat white eggs, White asserts. It’s that white eggs are natural — and what’s natural to you depends on the egg-laying bird you’re most accustomed to.

Anderson is co-author of a number of studies that have directly compared the nutrition of white and brown eggs, including a 2010 study that looked at egg samples found in grocery stores and a more controlled 2013 paper that looked specifically at hens fed the same kind of food.

With both studies, Anderson says that he and colleagues only found incredibly small differences in the overall nutritional content of the eggs — with white eggs sometimes being a little more nutrient- or vitamin-rich than the brown, or vice versa. Ultimately, Anderson says these differences were negligible.

“I ran this data by some registered dieticians, and they said these minute differences would not really have an impact on the human nutrition,” Anderson says.

To really have an impact, Anderson says the differences would need to be at least 10 to 25 percent or higher, which their results were not.

Why are brown eggs more expensive?

So if brown eggs aren’t really any healthier than white, why are they more expensive?

This is in part because a majority of organic and cage-free eggs are brown, Anderson explains, but also because hens who lay brown eggs simply need more feed than white egg-laying hens.

Giving these larger birds more space and food can add up for farmers and, in turn, for consumers as well.

“The brown egg strains require more feed for body maintenance so they consume slightly more,” he says. “Probably about 5 to 10 percent more feed.”

Which eggs should you buy?

There are lots of reasons you might still choose to buy brown eggs over white, whether you’re supporting a local farmer or maybe prioritizing antibiotic-free USDA Organic eggs. Anderson says that consumers might also favor nutrient-enriched eggs, like Eggland’s Best, which have higher vitamin levels and less saturated fat than traditional eggs.

But when it comes to nutrition at the end of the day, Anderson says that an egg is still an egg and you can’t go wrong no matter which you choose.

“All eggs are very nutritious,” Anderson says. “But if I’m about to buy an egg, I just buy on price.”