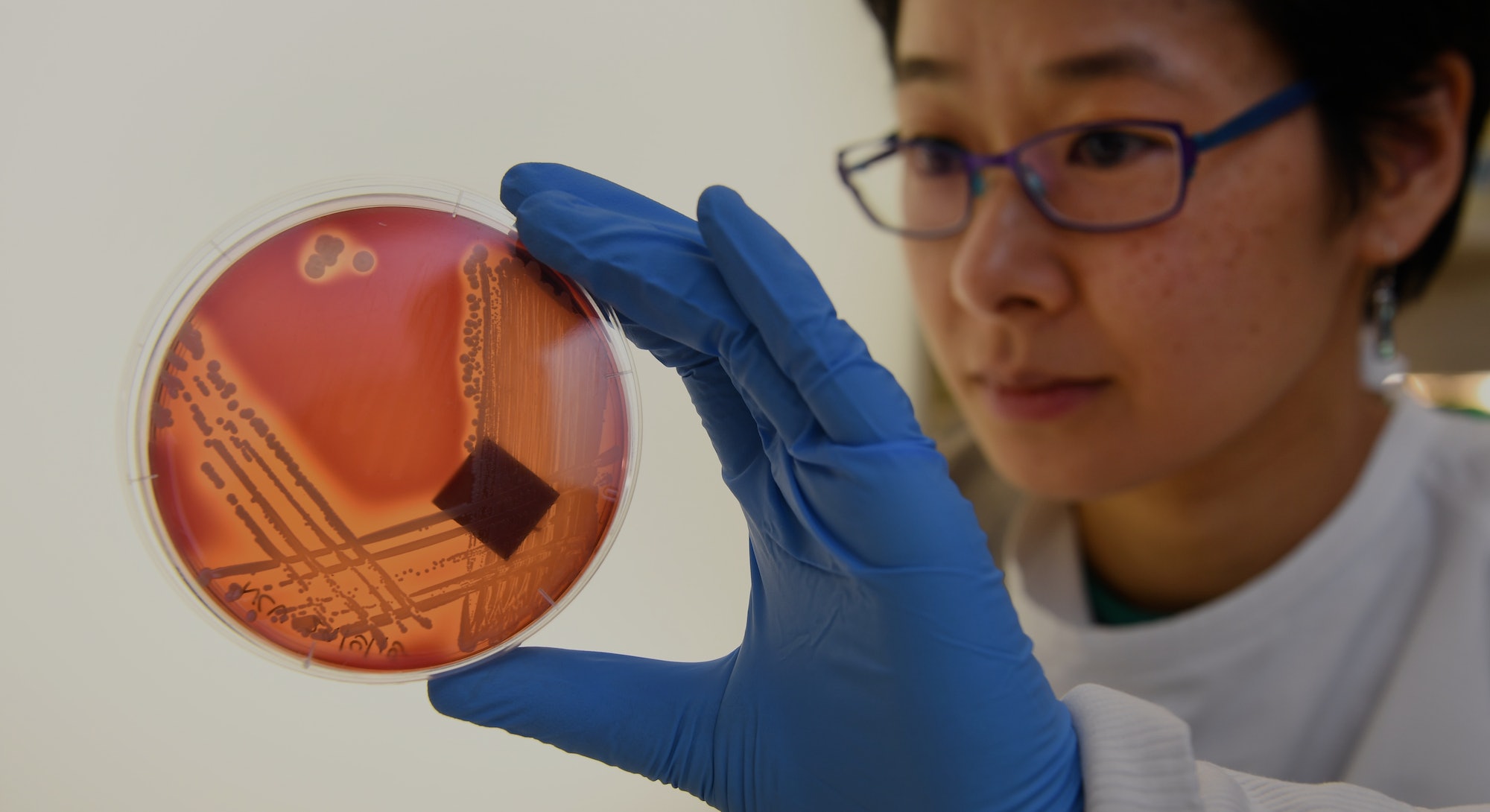 Before the spring of 2020, we always knew a pandemic like Covid-19 could happen, even if it felt like the real danger was perpetually in the future.

Now, as the pandemic slows in the U.S., a new question has emerged: How much have we actually learned from this pandemic?

The truth is that a different type of dangerous pathogen is already here: Scientists have called attention to it, but it still hasn’t garnered the type of alarm experts believe it deserves: antibiotic-resistant bacteria, also known as “super-bacteria.”

According to a 2019 report from the Centers for Disease Control, “more than 2.8 million antibiotic-resistant infections occur in the U.S. each year, and more than 35,000 people die as a result.” Experts think those numbers are likely to get worse before they get better.

We’re at the precipice of what will happen next. In June, a bipartisan House and Senate bill, known as the PASTEUR Act, was introduced, legislation that would support the development of new antimicrobials that might combat drug-resistant pathogens.

“No matter what we do, we will eventually run out of antibiotics.”

However, President Biden’s proposed 2022 fiscal budget leaves gaps in the resources we need to combat the problem, experts say. Meanwhile, new research shows how easy it is for antibiotic-resistant bacteria to spread as Covid-19 travel restrictions are being loosened.

The problem is being addressed, but is it enough? Unless we go full Operation Warp Speed, current efforts may be too little too late.

What are antibiotic-resistant bacteria?

Bacteria are incredibly adaptable. Like humans, they have genes and evolve to survive; only they do it faster and more efficiently than we do. Bacteria have a natural genome editing system that allows the bacteria to “remember” and fight off threats.

During this evolutionary process, bacteria develop genes that are resistant to all known antibiotics, called antimicrobial genes. When these super-bacteria come into contact with antibiotics, they can survive the treatment.

Think about what that means. Eventually, there will come a time when we do not have effective antibiotics against most bacterial infections. Infections we used to be able to treat with a week of penicillin would become fatal. Organ transplants and surgeries that require the use of antibiotics (so, basically all of them) would be in jeopardy.

Gautam Dantas, a researcher and pathology and immunity professor at Washington University School of Medicine in St. Louis, tells Inverse that even if we’re cautious with using antibiotics, we’re still reliant on them for certain infections.

“No matter what we do, we will eventually run out of antibiotics,” he says. “Eventually, bugs will accumulate enough resistance genes against those particular drugs. That's just guaranteed.”

Why do we have antibiotic-resistant bacteria?

How did we get here? There’s a dash of inevitability to the dire situation we’re in. Almost as long as there have been bacteria, there have been compounds with antibacterial properties.

“Some of the molecules we call antibiotics are natural; they’re found in some soils,” Dantas explains. “That tells us that we, and all organisms, have lived in the context of antibiotics and resistance genes for a very, very long time,”

That said, humans are largely responsible, and the overuse of antibiotics plays a starring role.

Beginning in the 1940s, there was a “glorious period of discovery” where scientists collected soil samples and uncovered their antibiotic properties, Dantas says.

But then we started prescribing antibiotics for everything.

Anytime we take antibiotics, we’re killing some good bacteria, some bad bacteria, and allowing the most antibiotic-resistant bacteria to become even more resistant.

In addition to antibiotics, travel can facilitate the spread of super-bacteria.

Travel and the spread of antibiotic-resistant bacteria

In June, Dantas and his colleagues published a study in Genome Medicine. They examined antibacterial resistant bacteria in the microbiome of Dutch travels.

The scientists took fecal samples from 190 travelers before and after visiting countries with regionally specific antibiotic-resistant bacteria. Specifically, they analyzed the antimicrobial genes in that bacteria.

They found that the antimicrobial genes in the traveler’s microbiome increased in both amount and diversity following travel. Some of the sequenced genes are known to be resistant to both common and “last resort” antibiotics.

In other words, these specific travelers don’t pose a threat to anyone and will likely clear most of the bacteria on their own. But, critically, the study shows how quickly super-bacteria could spread around the globe.

“The greatest risk is if [antibiotic resistant bacteria] were in the context of a bug that could cause disease,” he says. “That's the worst-case scenario. That's the COVID scenario.”

The good news about super-bacteria

It’s not all bad news. While the public could and should be paying more attention to this issue, scientists are working on addressing it, including finding new treatments that could neutralize antibiotic-resistant bacteria.

One of the most interesting possibilities was first discovered in bacteria itself: CRISPR. The gene-editing technology is what allows bacteria to become super-bacteria so quickly. It also could be their undoing.

Researchers have already had some initial success using CRISPR-Cas13a to target resistant genes in bacteria, and more efforts are underway to develop these potential therapies further.

“Taking antibiotics is not a benign event.”

From a bacterial perspective, antibiotics are a nuclear option. They kill good and bad bacteria alike (excluding super-bacteria). Not only can good bacteria in the gut mitigate some of the effects of bad bacteria, wiping out all but the most resistant bacteria leads to more efficient and dangerous super-bacteria. They’re like the villain in a horror movie; you think they’re dead, but they’re actually just coming back with bigger guns.

CRISPR may allow scientists to edit out the problematic antimicrobial genes in bacteria. Dantas says this would allow for precisely the targeted approach required to fight antibiotic-resistant bacteria without destroying good bacteria.

Without weapons, a horror movie villain is just a person.

Dantas explains: “I don’t care if I have e.coli in my gut, as long as I don’t have the kind that gives me diarrhea, right? That’s usually one or two genes. It's got 2,000 to 3.000 other genes that are perfectly fine.”

In addition to CRISPR, scientists are researching other possible treatments, like antivirals or even viruses called bacteriophages that eat bacteria. Early studies suggest this could be a promising treatment.

Unfortunately, these treatments don’t yet exist. This means that, in the meantime, we need to limit the proliferation and spread of super-bacteria as much as possible.

What you can do to stop antibiotic-resistant bacteria

Dantas believes the takeaway from the travel study is simple: when you travel, wash your hands, clean and cook your food, and use filtered water.

“Taking antibiotics is not a benign event,” he says. “Whenever we take antibiotics in a clinic, whenever we give antibiotics to raise food animals, we're rolling the dice. Each time we do that, we’re stacking the deck against us for the future.”

“People need to think twice before demanding an antibiotic from the pediatrician when their kids have the sniffles,” Dantas says.

It would help if you still took antibiotics when necessary — make sure it’s actually necessary.

Dantas has a warning about this crucial time in science and medicine: “We’re living in this era where we're watching a movie, but we're really only watching a couple of slides along the way. And we don't want the movie to end as a disaster.”

To avoid that bitter end, he believes we need to reshape how we co-exist with pathogens.

“What we need to learn from the microbes is their language of diplomacy,” he says. “They coexist in these incredible ecosystems. We need to figure out how that kind of language of coexistence works and harness it so we can maintain those healthy ecosystems.”