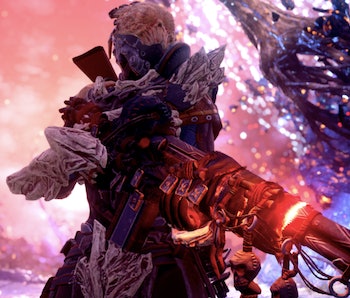 While Square Enix is hard at work on Final Fantasy XVI and the sequel to Final Fantasy VII Remake, the company is also releasing a new IP this year: Outriders.

Square Enix announced the game for the first time at E3 2019 with a cinematic trailer depicting a gritty sci-fi co-op shooter. People Can Fly, the same company that made Gears of War: Judgement and Bulletstorm, is developing this game, and it could thrive where Anthem failed by taking a similar approach to the sci-fi looter shooter model. It just may be the big sleeper hit of 2021.

Here's everything we know about Outriders.

When is the Outriders release date?

Outriders' current release date is April 1, 2021. The official Outriders Twitter account announced on January 6, 2021 that the release date was being pushed to April Fools' Day. Square Enix originally scheduled Outriders for a summer 2020 release, but that window was pushed back to holiday 2020 when the game reemerged in February 2020. It then was scheduled for a release date of February 2, 2020. This latest delay should be the last.

While Outriders' developers told Inverse in May 2020 that the game is already in the final stages of "finishing, balancing, and polishing," the teqam clearly need a little more time to ensure that the game is the best it can be before launch.

Will Outriders be on Xbox Game Pass?

Yes, it will be! In a shocking move, Xbox and Square Enix confirmed on March 15, 2021 that Outriders would be on Xbox Game Pass day one. That means players with the subscription can start playing Outriders at no extra cost on April 1.

This is a rare instance of a non-Microsoft AAA game being on Xbox Game Pass upon release, so it’s definitely an important release for the subscription service. It will be available on Game Pass on console and mobile. It won’t be on PC Game Pass, likely because Square Enix doesn’t want to cannibalize sales from other PC storefronts like Steam.

Is there an Outriders trailer?

The latest major Outriders trailer debuted at The Game Awards 2020. It reveals more details about the gameplay, highlighting a tidbit that suggests the upcoming game will borrow a gameplay conceit from Doom Eternal: You'll only be able to heal by killing your enemies. Since it's age-restricted, you'll need to jump on to YouTube to watch it for yourself.

What consoles will Outriders be released on?

Outriders was announced for PlayStation 4, Xbox One, and PC in June 2019, but in February 2020, we learned that the game would also be releasing for PS5 and Xbox Series X. Gaming Bolt reports that its launch will be simultaneous across all five platforms when Outriders' release date does roll around.

During a Stadia Connect in July 2020, Square Enix confirmed that Outriders is coming to Google Stadia like Final Fantasy XV. But this port of the game will not be released until later in 2021, months after the other versions are initially released in February. No Nintendo Switch version of Outriders is expected, and Square Enix has not revealed if the game will come to Amazon Luna yet once that cloud-based gaming platform is released.

What are the minimum and recommended Outriders PC specs?

Outriders is poised to have a fully-featured PC port. It not only has lots of settings for players to adjust for the best experience, but it will support 13 languages, ultra-widescreen, Dynamic Resolution Scaling, and NVIDIA DLSS. No matter the specs, People Can Fly is trying to make sure that the game always runs at 60 FPS.

You can learn more in the official PC spotlight trailer and see the minimum and required specs below:

Outriders is a third-person shooter that can be played either alone or in a group of up to three players. It's aiming to be less cartoonish than People Can Fly's previous outing Bulletstorm and will have visceral gore and weapons. To start, weapons will be fairly realistic; think shotguns and sniper rifles. That being said, the developers have teased that weapons will get more fantastical over the course of the game, with special modifications that burn or even poison enemies.

A lot of RPG elements have been spliced in as well. Though People Can Fly told Game Informer that they don't want enemies to feel like bullet sponges, enemies have health bars. Inverse has gone hands-on with the game and can confirm that the game feels like Gears of War meets Destiny.

Players have the ability to customize their character's appearance. They can choose between four different classes that give abilities to use in addition to one's weapons: The Trickster, the Pyromancer, the Devastator, and The Technomancer.

The Trickster is poised to be the most nimble of the three as it can teleport and slow down time to get out of tough situations. Next up is the Pyromancer, which has a plethora of heat-based attacks that it can use. This class seems to be the best for those looking for a massive spectacle with area-of-effect attacks that slowly whittle enemies down over time.

Then, there is the Devastator, which serves as the tank of the group. This class is heavy-hitting but can also use its abilities to protect itself with stone armor. If you want to see these first three classes in action, check out the trailer unveiling them.

Finally, there is the Technomancer class. This is definitely more of a support class, as it's the only one with a healing ability. Additionally, it can freeze enemies, poison them, and summon turrets to fend opponents off. While it isn't smart to make a team of 3 Technomancer, this is definitely a class someone in your group should have.

Is Outriders a games-as-a-service title?

No. Outriders director Barek Kmita told Game Crate that while players can draw comparisons to titles like Destiny or Anthem, People Can Fly does not see Outriders as a games-as-a-service title. "From day one we basically wanted to make the game for ourselves and we’re not talking against games-as-service services overall, but we just we wanted to give a complete story," he said.

"From A to B it’s a finished story. Early on we knew it wouldn’t work as a games-as-service." While Outriders will have endgame content and appears to be a fun title to hop into with friends, don't expect it to be built around weekly, or even seasonal, content drops like other popular multiplayer shooters such as Fortnite or Destiny 2.

What is the Outriders story?

Outriders follows the titular groups of characters who were part of the last bastion of humanity after Earth is ravaged beyond repair by climate change. The survivors flee to Enoch, which initially seems nice, but a mysterious force called "the anomaly" ruins typical technology and warps anything it touches. Players fall into a 30-year coma after being caught in it and have special powers when they come to.

From there, it appears that players will have to deal with all of the different factions scattered throughout Enoch to restore some semblance of a nice civilization. To get your feet wet with the game's narrative, check out its narrative trailer below.

When Square Enix confirmed a release date for Outriders, cross-play and smart delivery support were also confirmed. That means that players PC, PS4, PS5, Xbox One, Xbox Series X|S, and Google Stadia will all be able to play with each other.

When is the Outriders demo release date?

Square Enix finally confirmed that players would be able to go hands-on with Outriders early after delaying the game to April 1. A free demo that includes a few hours of gameplay and all four classes was released on February 25, 2021. It's playable in both single-player and co-op, and progress carries over to the final game. It will also never be removed from game marketplaces, so anyone will be able to test the game out via the demo before buying, even after it is released.

"We believe it's important that players get to experience a new IP like Outriders before release so that you can decide for yourselves whether the game is something you wish to pre-order, purchase, or play," the tweet confirming the delay and demo.

This article was originally published on Jan. 22, 2020