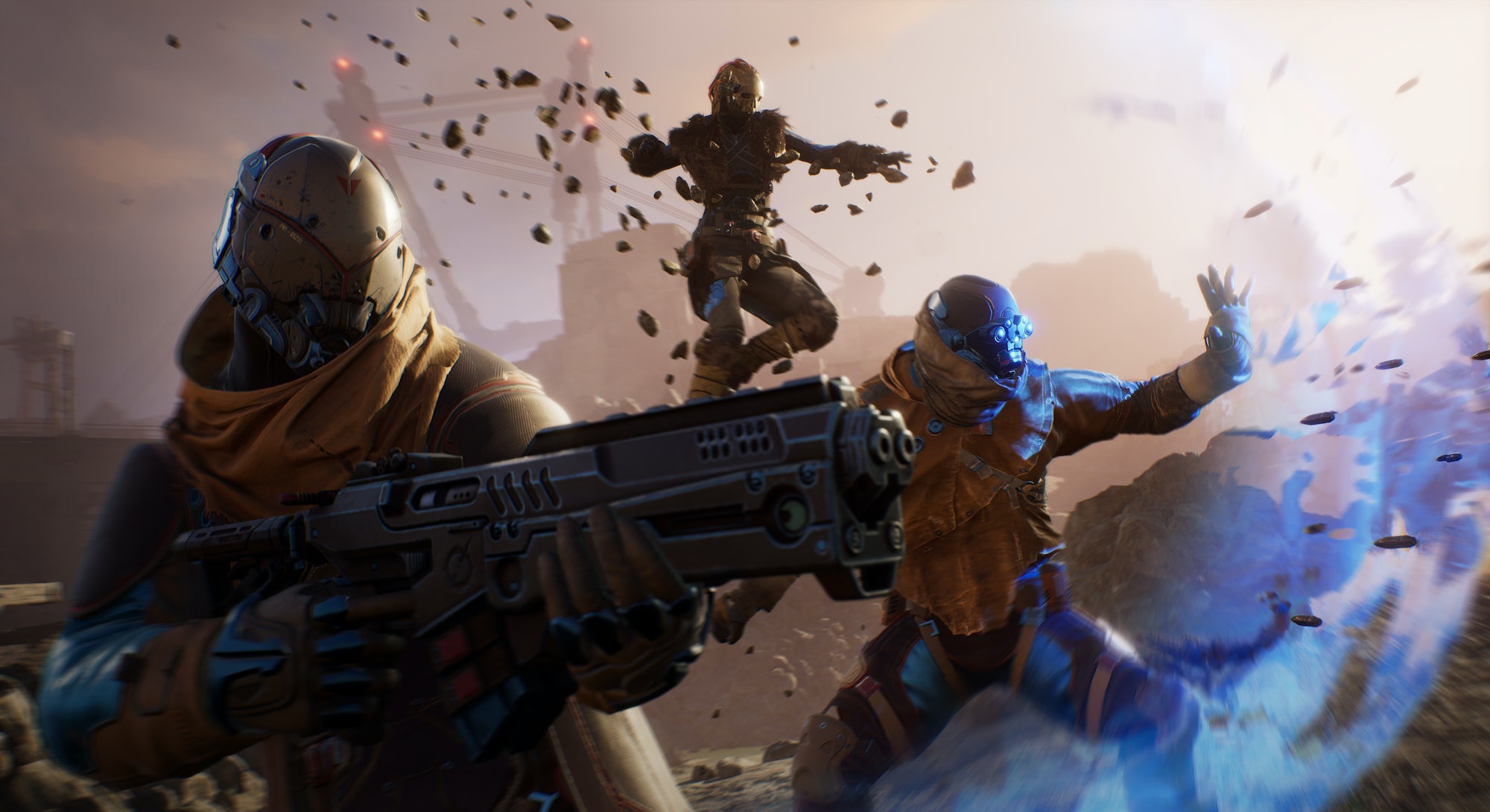 Outriders won't be like Destiny, Anthem, Fortnite, or any other live service game you might compare it to, because the developers seem to be taking a more holistic approach to high-quality gameplay in the short-term rather than make it yet another example of a "games as a service" (GaaS) title.

Square Enix and Bulletstorm developer People Can Fly held the first digital broadcast for their "drop-in, drop-out co-op shooter” on May 28, and towards the end of the video, Community Manager Robbie Palmer made it very clear that Outriders will not be a GaaS title with ongoing updates that require additional purchases via a battle pass or some similar model.

At first glance, Outriders does draw immediate comparisons to games like Anthem and Destiny as a sci-fi shooter with MMO-inspired multiplayer components. Anthem and Destiny, however, both fall under the GaaS model with near-constant updates that often include new missions, skins, and more that require additional purchases.

While the model ultimately works for Destiny, a franchise about to enter its sixth year, the first entry endured a rocky launch as the game felt underdeveloped and incomplete. Anthem was lambasted at launch, and fans are now waiting for a Final Fantasy XIV: A Realm Reborn-style relaunch that could save the game.

The developers behind Outriders hope to avoid the same pitfalls by focusing less on long-term revenue and more on the quality of gameplay.

“When we are thinking about our game, we don’t want to start from the point that we are building the game as a service,” Outriders Design Director Piotr Nowakowski tells Inverse. “We definitely wanted to deliver something that’s complete and has everything from the rich story, additional things, and access to all items with the end-game.”

One of the biggest problems service-based games can run into is feeling like they don’t have enough content at launch, or that the best content is locked behind a microtransaction paywall. While the developers we interviewed were adamant that Outriders would still get post-launch support, they were also clear that GaaS was “not [the] starting point.’

“Let’s build a good game, and then we’ll see how it goes,” Nowakowski says.

In an age of games-as-a-service titles, this sentiment will probably be a relief to many gamers.

Below is a Q&A with Outriders Game Director Bartosz Kmita and Design Director Piotr Nowakowski.

Inverse: How's the team been adjusting to remote work caused by Covid-19?

Bartosz Kmita: We have some experience in our company working with our companies that are abroad. We have four companies in the world, so we were already using all the remote communication tools. All of our technology was supported to basically deliver the builds to different places, so somehow this transformation from the office to home went smoother than we ever thought.

Piotr Nowakowski: It’s always a change but luckily it wasn’t so cruel like it was for other industries.

Kmita: The bigger problem, to be honest, was not to change the work-related things, but the changes to promotion. Because E3 and other shows were canceled, we've had to adjust.

We don't know what we will be in the future; that's even the bigger problem. Overall, the transformation from office to home went quite smooth and we developed some new pipelines, new company communication tools, and some of those experiences I think we will keep even after this complete madness ends.

This last push leading up to release is always the most tiresome. There's still plenty of work, but this period right now, it's maybe easier to be in the Covid situation. I think it would be a lot harder at the beginning of the development when the process is a lot more chaotic. There's a lot more intercommunication with people, a lot more changing amidst creative chaos. Right now, it’s finishing, balancing, polishing, bug fixing. All these things all together is rather systematic work day by day, so this way, it's a little bit easier.

This game started development after the team split off from Epic Games, so how has Outriders evolved over time?

Nowakowski: I don't think we changed the approach. The idea was there from the beginning. The biggest challenge is the scale. Initially, we had a lot of ideas, but the scale of the game was smaller.

Square Enix is happy with the game and they support us and give us more space. From my point of view, that was the biggest change: not the direction, but the scale.

Kmita: Of course, we're trying different things during the game development. The scale was the biggest change not only for the game but even for the studio because when the scale was changing, the studio was growing.

Being a looter shooter is new ground for People Can Fly. What have the developers referenced when forming these systems, as some games like Borderlands 3 do them really well while others like Anthem don’t?

Kmita: With progression, we are going more closer to the RPG games where this progression and the customization is a bit more complex. We want to give more tools for the player to change his playstyle. We don't want to restrict you to the class and to the only one type of play.

So I think the progression from the loot aspect is the biggest area where we’re looking to the competitors for right now. We are going to give you these tools, not only the items but the progression trees, there are a lot more choices and options to build your character.

You’ve made it clear that Outriders isn't a “games as a service” title even though many similar games are. What lead to this approach?

Nowakowski: When we are thinking about our game, we don’t want to start from the point that we are building the game as a service. We definitely wanted to deliver something that’s complete and has everything from the rich story to access to end-game items.

It doesn’t mean that we will not be supporting the game, making adjustments and maybe creating some more content. "Yeah, let’s build that game as a service!" is not our starting point. It's “Let’s build a good game, and then we’ll see how it goes."

As Outriders is on PS5 and Xbox Series X, what excites you the most about the next-generation of consoles?

Kmita: There are a lot of things that excite us; unfortunately, we cannot tell you what we are creating for the next-gen consoles. Even just simple things like more power and more RAM for the game developer are exciting.