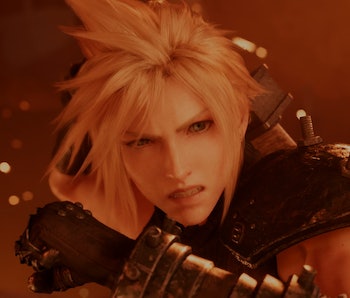 Final Fantasy fans have been waiting an awfully long time to get their hands on Final Fantasy VII Remake. The beloved role-playing game revolutionized the genre when it debuted in 1997, and fans have been clamoring for a modernized version ever since. Ahead of the game’s March release date, a new leak suggests that a demo for FF7R is headed to the PlayStation store.

Gamstat tracks every new addition to PSN, and surfaced the new digital listing on December 25. According to the site, the demo will be available in America, Asia, Europe, and Japan. Earlier this month, the site was among the first to reveal the upcoming Resident Evil 3 remake, after it uncovered a PSN placeholder for the game about a week before it was officially announced during Sony’s State of Play streaming event on December 10. In other words, while this Final Fantasy VII Remake demo is just a rumor, we’re guessing it’s legit.

Gamstat doesn’t specify a specific date that the demo will go live. In theory, it could happen any time, but we doubt Square Enix will roll it out during the holiday doldrums. PS4 owners will probably get a chance to take the new and improved Cloud Strife for a spin sometime in the new year. Square Enix plans to release the game’s soundtrack vinyl on January 31, so it’s possible the company will use the occasion to debut some new gameplay footage and launch the demo.

The PSN listing obtained by Gamstat doesn’t provide any information about what sections of the game the demo will pull from, but we’d imagine it’s the E3 demo of the very beginning of the story. If you’ve been following the news for FF7R even a little bit over the past several months, you’ve probably already seen this footage plenty of times.

While it would be nice to see more areas and environments ahead of the game’s release, it’s still fun to experience the new combat system with this months-old demo if you haven’t had the chance yet. It’s fun and frenetic, taking what worked from the battles in Final Fantasy XV and merging it with the familiar turn-based mechanics of older entries in the franchise.

The refreshed combat system is one of several ways FF7R blends innovation and nostalgia. Longtime fans can expect greater insight into Cloud’s inner life throughout Remake, partly due to improved animations allowing us to glean more about his personality without words.

Back in November, scenario writer Kazushige Nojima said, “In Final Fantasy VII Remake, there will be much less room for player imagination,” Nojima explained.