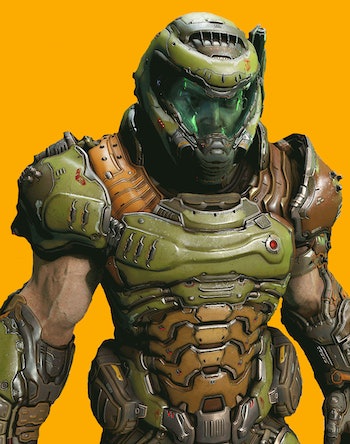 Doom Eternal will not make you weep.

It won't leave you lying awake thinking about a heart-rending plot twist, either. But it will have you actively shouting curse words at your television and fist-pumping into the air like a glorious maniac. It will make you feel the blood rage. Doom Eternal is the polar opposite of a game like The Last of Us, and it is an absolutely glorious experience in its own right.

Where Naughty Dog's post-apocalyptic adventure is tender, cinematic, and stealthy, Doom Eternal is blunt, brutal, and guns-blazing. You play a hulking soldier crudely called Doomguy who sprints through the far-flung future to rip demons in half with his bare hands.

"We are junk food, we’re a giant burger with fries and a milkshake, but we are loaded with nutritional content," Doom Eternal Creative Director Hugo Martin said in a January interview with Shacknews. Sure, we all know junk food isn't good for you, but when you're in the mood, nothing tastes better.

Doom Eternal is exactly like that. It also has twice the runtime as the previous game — and it might be twice as good.

I played and loved Doom (2016), yet I can confidently say I have absolutely no idea what is going on in this universe. Despite that, and how much I dislike the overall aesthetic of these games, I can say beyond a measure of a doubt that Doom Eternal is fucking awesome. That said, the only thing you will likely ever comprehend about this universe is the desire to kill. Playing Doom over the course of one feverish weekend was the existential equivalent of eating an entire pizza alone, and Doom Eternal has even more toppings.

While you're concerned with tearing demons limb from limb, the other characters in this world are deeply concerned with the global energy crisis and using hellish pseudoscience to solve it. Doom Eternal doesn't involve a biblical Hell, but a different dimension where demonic-looking creatures reside. There are even more aliens to confuse you this time around, but they're still pretty punchable. All of this lore is there in Doom and Doom Eternal, but it's just so hard to remember when you spend your time ripping nasty creatures apart by the hundreds and can hear your own blood thundering in your ears when a robot mansplains all this to you.

Doom Eternal picks up an unspecified amount of time after the 2016 reboot, with Doomguy arriving back on Earth in a spaceship that looks like an ancient floating castle. It's all very confusing, but also rad. Hell is invading Earth and you're the only one who can stop it. The ridiculous violence and hideous monsters make for a visually stunning experience even if the story feels derivative at times.

At no point does Doom Eternal ever feel repetitive, which is surprising for a single-player narrative with a 20-plus-hour playtime. Each major mission has variations throughout, and things get exponentially more interesting as you hurdle into the final act. From a narrative standpoint, it feels like too little, too late. Yet it's also forgivable for an FPS this good.

The overall aesthetic is occasionally irritating with all the edgelordy skulls and runes etched in blood, but I love Doom Eternal in spite of myself thanks to its engaging and surprisingly nuanced combat. In every way, Doom Eternal is a vast improvement on its excellent 2016 predecessor. There's a more complex arsenal of weapons and a myriad of ways to customize your personal Doom Slayer to emphasize your favorite combat strategies. If you’re good at sniping, you can invest a lot into upgrading the sniping mod for your Heavy Cannon, and if you invest further in it, you can make it so that every precision kill causes the enemy to explode. That same weapon has a mod that fires a barrage of small missiles with its own potent upgrades.

There are at least five different subsystems that allow you to adjust your weapons, armor, utilities, overall stats, and more. The combat depth sits somewhat awkwardly alongside the shallow story, but its robustness elevates the whole experience.

Doom Eternal might get a C- for narrative, but the character customization and combat are an A+. For anyone who favors aggression, Doom Eternal is pure ecstasy that rewards going on the offensive. Here's the other major place where it's the polar opposite of a game like The Last of Us.

Throughout TLOU, you play a person ill-equipped to handle the apocalypse. You have to plot a tactical approach to each situation. Every time you're shot by someone or bitten by a mutated monster, you're on the brink of death.

Doom Eternal encourages players to take insane risks, by means of a polished mechanic from the 2016 game. Attacking an enemy leaves them "staggered," which allows you to pull off a Glory Kill, replenishing your health. Dousing an enemy with a flamethrower before shooting them means they'll drop armor. You're going to get shot and hit constantly, but if you're doing it right, you're going to be healing at the same time.

Once you get good at Doom Eternal, it becomes a transcendent experience as you recklessly hurdle into one horde of demons after another. Vertical platforming is also an important component of gameplay this time around, often requiring you to jump off a cliff into what looks like certain death, only to notice a ledge you can cling to at the last second.

Even if you're freaked out by monsters, demons, zombies, and everything in between, there's something so empowering about thrashing them all to bloody bits. A game where you rip out a demon's explosive heart to shove it down their throat will never be known for nuance, but there's a place in every gamer's library for the pure adrenaline of Doom Eternal. 8/10.

INVERSE VIDEO GAME REVIEW ETHOS: When it comes to video games, Inverse values a few qualities that other sites may not. For instance, we care about hours over money. Many new AAA games have similar costs, which is why we value the experience of playing more than price comparisons. We don’t value grinding and fetch quests as much as games that make the most out of every level. ¶ ️We also care about the in-game narrative more than most. If the world of a video game is rich enough to foster sociological theories about its government and character backstories, it’s a game we won’t be able to stop thinking about, no matter its price or popularity. ¶ We won’t punch down. We won’t evaluate an indie game in the same way we will evaluate a AAA game that’s produced by a team of thousands. ¶ We review games based on what’s available in our consoles at the time. For instance, we won’t hold it against a video game if its online mode isn’t perfect at launch. ¶ And finally, we have very little tolerance for junk science. (Magic is always OK.) ¶ Here’s how we would have reviewed some classic games: 10 = GoldenEye 007. 9 = Red Dead Redemption 2. 8 = Celeste. 7 = Mass Effect 3. 6 = No Man’s Sky. 5 = Fortnite. 4 = Anthem. 3 = Star Wars Battlefront II. 2 = Assassin’s Creed Unity. 1 = E.T. the Extra-Terrestrial.