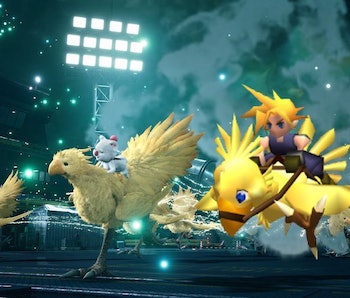 Final Fantasy VII is beloved by millions for good reason. It boasts an impeccably detailed world that is impossible to forget. Its endearing-as-hell characters are swept up in a nonsensically epic story with dozens of memorable setpieces. Final Fantasy VII Remake proved that Square Enix could strengthen the elements of the 1997 original while abandoning those that haven’t aged so well, like random encounters.

We still don't have an official release date — or even a release year — for the next-gen sequel, but even this far out, we can say with confidence that the worst minigame in Gold Saucer should definitely be left in the PS1 era. Here's why we absolutely don't need to see Chocobo racing on PS5, whenever FF7 Remake Part 2 finally launches.

FF7 Remake Part 2 will introduce players to a bigger, more expansive world, as Cloud and his companions venture beyond Midgar. In the original game, the party appeared on an expansive, top-down world map after leaving the massive steel city, free to enter a succession of towns, caves, and dungeons. One of the first places you’re able to explore after leaving Midgar is the Chocobo Farm south of Kalm. There, you’ll learn how to attract Chocobos and ride them around the map, avoiding battles and getting to your destination more quickly. You can buy Chocobo food from the stablehand, Choco Billy. Later, Billy lets you breed birds in exotic colors, capable of traversing mountains and water.

There’s already good reason to suspect we won’t see the Chocobo Farm in the next installment of FF7 on PS5. For one thing, we’ve basically already met Remake’s version of Choco Billy. This time around, he’s called Chocobo Sam, and he’s a gruff bearded daddy with a PlayStation 3 face. Sam and Billy serve the same purpose in both iterations of FF7 — introducing and explaining a new method of travel.

When the party reaches the Gold Saucer amusement park in the original FF7, Cloud and his friends get their first taste of Chocobo Racing. You’ll need to complete a few races in order to advance the story, managing a simple fatigue and boost system while navigating turns and twists in the rainbow-hued courses.

Here’s the thing. Chocobo racing isn’t fun. It wasn’t fun in 1997, and it wasn’t fun when they tried to give it a modern spin in Final Fantasy XV either. Chocobo racing is the eggs benedict of Final Fantasy. The concept sounds appealing, even when experience has taught you otherwise plenty of times already. The pictures always seem nice enough. But once you get your teeth in, you think to yourself in your best Chocobo Sam voice — they done foolt me again.

The controls are exasperating, with finicky timing that often feels unfair. Winning Chocobo races in FF7 is rarely a matter of skill, but of grinding and endurance. If you wanted to uncover the game’s biggest secrets, like the Knights of the Round materia, you had to breed a Gold Chocobo. That meant spending hours slogging through races in Gold Saucer to level-up your birds from C-tier to S-tier, breeding them, and repeating the process for several more hours. FF7’s Chocobo breeding and racing systems feel designed almost purely to sell strategy guides, as was the fashion in the late 1990s, as these systems aren’t clearly detailed in the game itself.

Racing and breeding Chocobos in Remake Part 2 makes even less sense when you consider the first installment already established a Chocobo-based fast-travel system that it will likely stick with for the sequels. Sure, we’d love to see an old-school world map in Part 2, but it really doesn’t fit with the traversal and sidequest systems we saw in FF7 Remake. While airships are obviously a big factor in the original story, we wouldn’t be surprised if there’s not a 1997-ish world map in Remake Part 2. Instead, we expect to see an even bigger network of the Chocobo Stops that open up in Chapter 14 of Remake. That design change would all but eliminate the need for Chocobo breeding and racing.

In the original FF7, Chocobo racing was something you had to endure in order to get Knights of the Round. But Remake’s given us a potentially more satisfying workaround there, too. Instead of racing and breeding Chocobos, perhaps Remake Part 2 will let Cloud fight the Knights via Chadley’s VR simulator to acquire the summon. We’d take another super-tough hidden boss fight over a tedious grindfest any day.

While we don’t want to spend countless hours racing magic poultry in Gold Saucer once Final Fantasy VII Remake Part 2 comes to next-gen consoles, that doesn’t mean it needs to be eliminated from the story completely. Perhaps the Chocobo races could become a much more important story setpiece, like Don Corneo’s battle arena, which was a new invention for Remake. Who knows, maybe Cloud and Roche could end up having a rematch race amid a flurry of feathers? Stranger things have happened in the world of Final Fantasy.