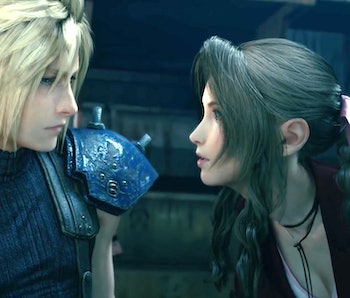 For all its hot-and-bothered flirting and eye-candy cast, Final Fantasy VII Remake doesn't include the famous Gold Saucer date sequence from the original game. However, it does have a pretty close equivalent that's easy to miss on your first playthrough. At the beginning of Chapter 14, you'll see a cutscene in the middle of the night at Aerith's house. One of your companions will have a sleepless night, and Cloud will venture into the garden to investigate and have a heart-to-heart chat.

Here's how your choices throughout the game will affect which of the three possible cutscenes you see. Light spoilers ahead for FF7 Remake, but we're not spoiling the Chapter 14 secret scenes themselves.

Like the original game, FF7 Remake has a hidden affection meter that measures Cloud's relationships with his fellow party members. Generally speaking, any time you're prompted with a question by or about one of the girls, your response will affect Cloud's relationship with them. I totally missed this the first time I played the game, until the post-game checklist showed me there were three possible "resolutions" for Chapter 14.

The first prompt for Aerith comes in Chapter 2, when she approaches you with a flower. "How much?" is the best response to increase the affection between her and Cloud. Shortly thereafter, in Chapter 3, Tifa will offer you a drink. Telling her you want "Something hard" will increase the bond between them.

Completing sidequests throughout the game also influences Cloud's relationships with his companions. To see Cloud's Chapter 14 scene with Barret, choose negative answers for both Tifa and Aerith, and complete a minimal number of sidequests.

When you fall into the sewers at the beginning of Chapter 10, you'll see both Tifa and Aerith lying unconscious on the ground. The one you choose to check on first will get an affinity boost with Cloud.

It's not clear if any of the Wall Market dress questions factor into Cloud's relationships with the girls, but it can't hurt to be extra complimentary if there's a particular scene you're eager to see. My tendency was to do all the early sidequests and be nice to both girls, and I ended up seeing Tifa's scene. I assume it was that Chapter 10 choice that tipped the scale. That said, it's not clear at this point which of the three is the "canon" scene, or if all of them are. They don't necessarily contradict one another.

YouTube channel Naughty Gaming has put together a compilation of all three cutscenes, which you can check out here. (We'd embed it, but the cover image is a bit spoilery if you want to discover the scenes on your own.)