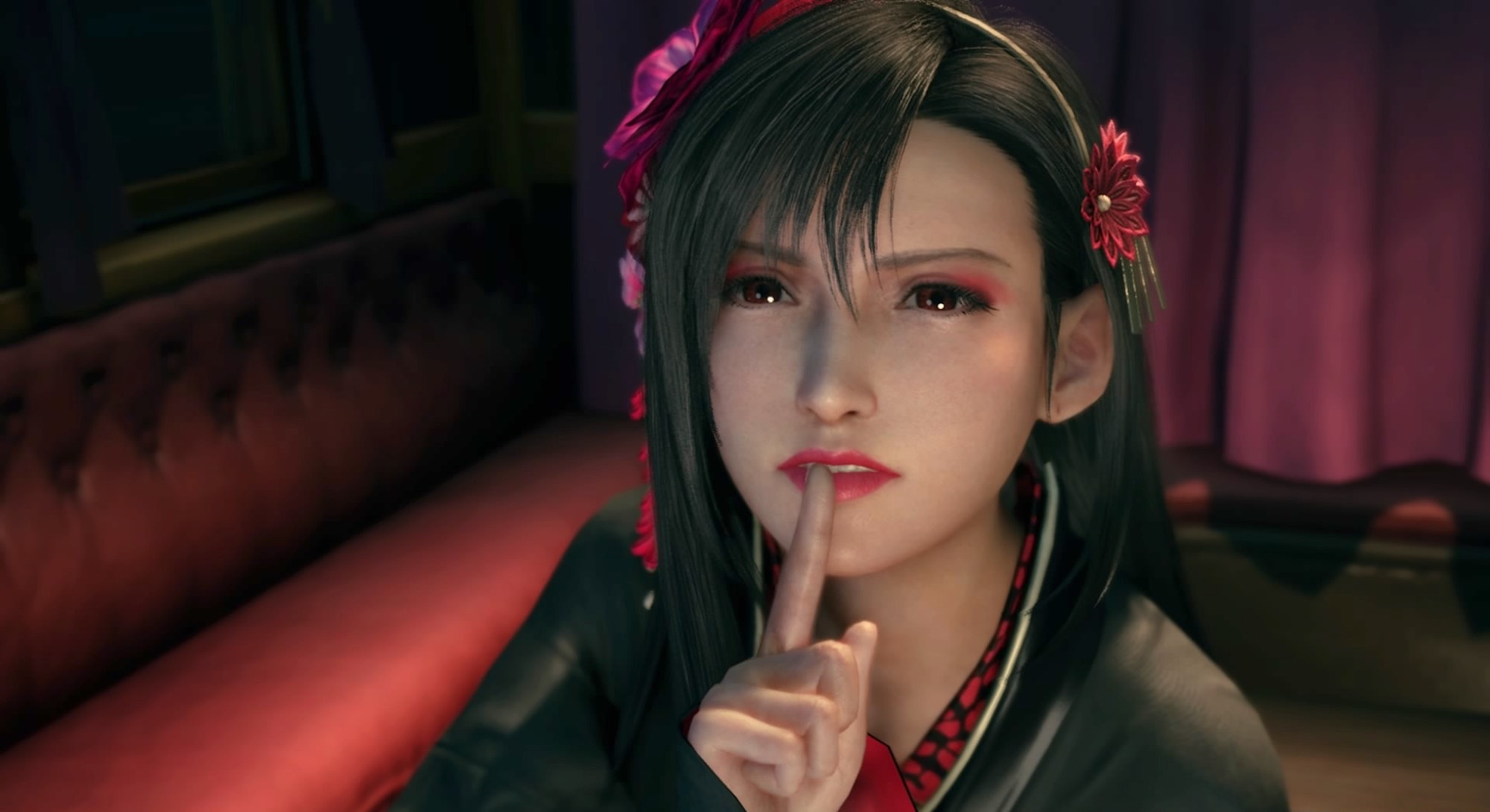 Final Fantasy VII Remake is a massive nostalgia bomb for millions of gamers out there — and it’s also a total thirst trap.

The boxy polygons from the 1997 original and awkwardly translated dialogue have been replaced by gorgeously rendered animations and top-notch voice acting. FF7 Remake transports you to a vibrant, anime-inspired world where all the key players are ridiculously hot and very interested in flirting. Judging from the chatter surrounding the game on Twitter, we're not the only ones picking up on these frisky vibes.

Corey Plante: I think we need to start with the elephant in the room, which is that even with the original Final Fantasy VII, I was a huge Cloud and Jessie shipper for reasons I don't even understand. I’ve proclaimed this loudly to you for months to the extent I’ve worried that it’s become annoying. For people like me, Remake is a triumph. The way Jessie teases Cloud with her unbridled energy is infectious.

In the original, Jessie has a minor role as Avalanche’s tech expert. She builds bombs and gets the security codes that help them infiltrate the Mako Reactors, and she somewhat shyly has an obvious crush on Cloud. She’s smart, demure, and just a little bit insecure. Like every other character, she gets a personality overhaul in Remake to become this obnoxiously flirty yet fully realized person. Is it weird if I call her a “sexpot?” Because it feels like an accurate term here. I nearly died when she invited Cloud over for a pizza date and the only options you get are “No…” and “No!” I think I texted you out of sheer exasperation.

FF7 always had this obvious love triangle between Cloud, Aerith, and Tifa. By making Jessie such a central love interest, it transforms an already excellent JRPG into a full-on harem anime experience. It’s so smutty and I love it.

Jen Glennon: I’m delighted by your (mild?) obsession with the Cloud-Jessie ship! That’s mostly because it’s something that honestly never occurred to me in my too-many playthroughs of the original FF7. You don’t spend nearly as much time with the Avalanche peeps, so I never really sparked with her, Biggs, and Wedge. That’s not the case this time around, and it doesn’t feel like padding at all.

Also, Biggs kind of has this Ferris Bueller’s Day Off young Charlie Sheen thing happening, and I’m a little disturbed by how damn handsome he is. He definitely has a glint of mischief in his eye that makes me a little bit melty. (Apparently I'm not the only person who thinks so!)

In the original game, the Cloud-Tifa pairing is much more of a slow burn. FF7 Remake throws it at you right out front, with Jessie asking about their relationship in Chapter 1 before you even meet Tifa. Not even 20 minutes into this game, you’re in a love triangle. Then you get to Sector 5 and all the passerby are commenting about how "purty" Tifa is. There’s this simmering anticipation to meet her, and once you finally do, she really lives up to the hype. You can practically hear Cloud’s inner monologue screaming at him not to react to how gorgeous she looks. But he does manage to get it together for two seconds and give her a flower.

Cloud’s awkwardness with these three beautiful, confident women is one of the most consistently delightful aspects of this game. Yes, it’s very harem anime, but I’m eating it up. It all takes me back to those awkward tween feelings for sure. There are so many fun little details, like when Cloud says “Don’t be weird” if you try to enter Tifa’s room, or how he just freezes when Aerith asks him for a high five.

Corey Plante: I love how much time is invested into fleshing out the Avalanche members. Whoever decided to cast that actor who plays Badger in Breaking Bad (Matthew Lee Jones) as the voice of Wedge made an inspired choice. He plays lovable doofus so well. I will never forget the moment when Jessie playfully slapped his bare ass after he's bitten by one of the evil Shinra dogs. FF7 Remake is saucy!

Of these three, Biggs definitely gets the least amount of airtime in both versions of the game, but I agree that he — like almost everyone in Remake — is so attractive that it’s distracting. There’s a cool moment in the second Mako Reactor mission when he uses the grappling hook to drop down a hole, and it felt like he was the new Tom Cruise in a Mission Impossible-type movie for a second there.

I’ll definitely return to the rest of the original soon, but my immature eyes didn’t appreciate the “slow burn” of Cloud and Tifa’s relationship as much back then. Remake is able to do a lot more in terms of contextualizing their complicated past. They’re a bit awkward and tense with one another in early scenes. It really feels like two people who are attracted to each other but are unsure of how to reconnect after all this time apart. Before they get a chance, they’re swept up into this adventure. I can’t wait to watch the rest unfold over time.

What’s more distracting: Tifa’s abs or Barret’s muscles? He was basically just a box that screamed in the original, and now he’s this swole, passionate older guy who’s a bit goofy but very earnest. And Tifa's abs steal every scene!

Jen Glennon: The answer to that is C: Scarlett’s impossibly gigantic boobs in her “executive corset” getup. She also uses a dude as a footstool at one point. I’m definitely looking forward to slapping her once we get to Junon. [Editor's Note: In FF7, Tifa and Scarlet have a very awkward slap battle.]

Barret has definitely gotten a well-deserved glow-up in FF7 Remake. There’s a lot of bluster, but if your heart doesn’t melt when he takes off his sunglasses to talk to his adopted daughter Marlene, there’s something wrong with you. Big daddy indeed.

Curious that we’re not talking about Aerith here quite as much. There’s definitely a flirtatious element to their alone-time together, but it feels more platonic than Cloud’s interactions with Jessie or Tifa. That said, she does have a particularly solid “oops I fell on you!” moment. Every girl gets an “accidental” embrace with Cloud. I’m sure some people will roll their eyes at this because the game piles this shipping stuff on very thick, but I can’t get enough of it.

The Wall Market scenario is a lot different this time around, but I think it’s even better than the original version. The whole Honey Bee Inn sequence feels very Yakuza 0 in the best possible way. Grumpy Cloud getting catcalled by drunks in a poofy ballgown will never not be funny. When I first saw the trailers, I was a little wary of all the new Wall Market characters, but they add a mature counterpoint to the awkward teen fumblings of the main cast and don’t overstay their welcome.

Chocobo Sam is another hot daddy, and clearly has some kind of past with Madame M – who’s exactly the kind of sexually confident woman Cloud has zero idea how to talk to. Every scene they share, Cloud looks like he’s being boiled alive. (This makes Cloud 100 percent more attractive in my eyes, for what it’s worth. I love how he seems so cool on the outside but is actually an insecure dork at heart.)

Corey Plante: I adore all of the “accidental embrace” moments with Jessie, whether it’s that first time he saves her in Reactor 1 or their embrace outside her place where she talks about making him pizza. There's also they're about to parachute down to the slums and she does that awkward shuffle; I genuinely thought she was about to give him a good luck kiss as the music swelled right before she jumped. I nearly died.

The emotional high points in this game are incredible, and they’re often tinged by sexual tension of some kind. The “Tifa Tumble” (as I call it) when they both leap from the train circa Chapter 5 and Cloud gives her this protective embrace? Wow. When Aerith trips from 30 feet in the air minutes after saying she’s not a damsel in distress, and Cloud catches her?

Has there ever been a game this swoon-worthy?

My lack of Aerith talk probably has more to do with me being woefully behind (I’m only on Chapter 8). She’s definitely more lighthearted and playful with Cloud, and her flirtiness strikes a different tone. Jessie is downright thirsty. With Tifa, easy and natural banter hints at something more intimate. Aerith is kind of a flirt. I’ve always kind of felt Cloud and Aerith’s budding romance had more to do with Cloud being a Zack stand-in than something more authentic, and that’s obviously wrapped up in a lot of stuff we don’t learn about here.

It’s interesting how Remake takes the weirdest and potentially most unwoke Final Fantasy and transforms it into a game that’s really self-aware and contextualized despite all the weirdness. Thirsty but never obscene, it’s a game brimming with life and interesting characters with fun dynamics — but also tons of hot people being hot.

My final questions: Who do you ship for Cloud? How hot is Sephiroth? And what’s your favorite thirsty moment?

Jen Glennon: Tifa, now and forever. I’m a sucker for a “childhood friends fall in luv” storyline. My fave swoon-worthy moment is between the two of them in Chapter 14, and I won’t spoil it. Before that, the “Tifa Tumble” and Jessie asking Cloud on a date.

I’m gonna say it: Sephiroth got a downgrade! He has dark circles — so do I, but that’s what concealer’s for — and a creepy-ass chuckle. Maybe I'm an outlier, but he looks unwell here.

Corey Plante: My answer’s obviously Jessie, but in the Tifa-Aerith debate, I’m also pro-Tifa. Broken people with shared trauma overcoming it together makes for relatable, emotional storytelling. I’m excited to watch it evolve over time and I CANNOT wait to see whatever this Chapter 14 moment is.

There’s something very haunting and asexual about Sephiroth here. Part of it has to do with a design that seems more androgynous to me. He’s this lithe specter haunting Cloud rather than a formidable, legendary badass. I can’t wait to see what they do with Yuffie.